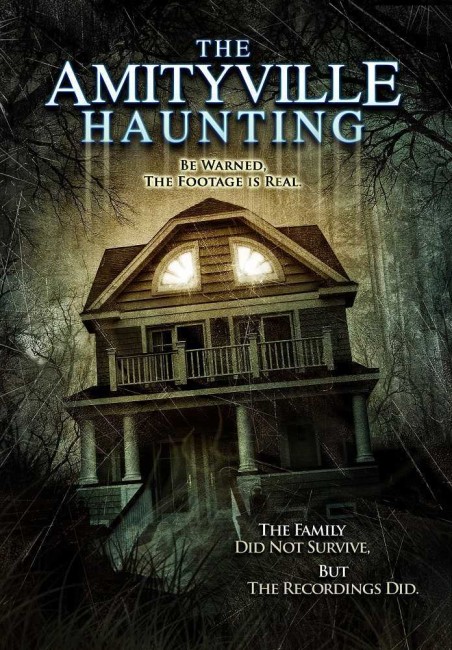 Husband and wife Douglas and Virginia Benson purchase the infamous Amityville House. They move in with their three children. The son Tyler starts filming everything with a video camera. There are several mysterious accidents around the house resulting in fatal deaths, as well as a patio door that keeps opening every night at 3:15 am. Tyler keeps trying to tell everyone the house is haunted and is ignored but eventually the others have to agree with him.

With The Haunting of Winchester House (2009), The Asylum came up with the idea of creating low-budget haunted house films that were sold with the association of famous supposedly haunted place names. Winchester House came out four days after Paranormal Activity (2007) went into wide US release and proved a smash phenomenon with its use of the Found Footage format. The Asylum quickly jumped on the bandwagon and offered up a series of Found Footage ghost stories set around famous ghost sites or ones associated with serial killers with the likes of Gacy House (2010), Anneliese: The Exorcist Tapes (2011), A Haunting in Salem (2011), The Haunting of Whaley House (2012), 100 Ghost Street: The Return of Richard Speck (2012) and The Bell Witch Haunting (2013).

The Amityville Haunting is cheaply made and unconvincing. It doesn’t even do Found Footage well – there is nothing in the way of jagged, broken camerawork or the characteristic look of flickering frames and static you usually get, all that we have is handheld camerawork being conducted with regular video cameras, while the latter half of the show intersperses this with Paranormal Activity-styled security cameras.

Even the hauntings are fairly lame – a door that opens of its own accord and a sinister figure that appears in some shots and interacts as an Imaginary Companion of the youngest daughter (Gracie Largent). The rest of the show gives us a series of jumpshocks in which a background character will turn up every so often – the realtor, a mover, Jason William’s army friend who installs the cameras – and is then killed or snatched from out of frame. Most of these are not very interesting, the sole amusement being where Jon Kondelik’s army friend is abruptly killed by a falling electrical cable.