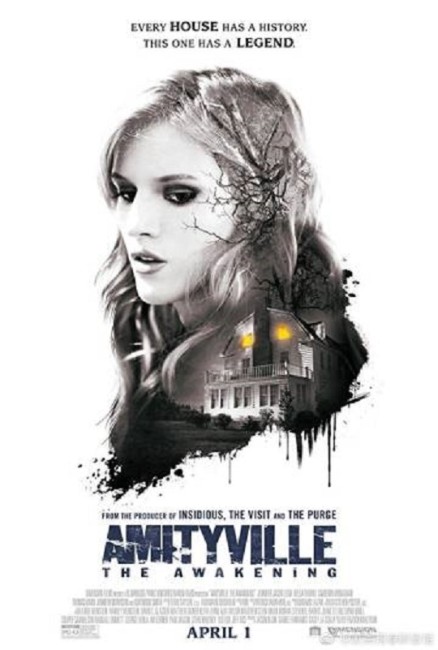 Joan Walker moves into a new house in Amityville with her two daughters, the teenage Belle and the younger Juliet. The reason for the move is that the house is closer to a top neurology clinic that can offer help for Belle’s twin brother James who is in a vegetative state following an accident. Belle begins to experience spooky phenomena around the house. At school, she learns that the house they have moved into is the famous Amityville Horror house. As James starts to make a miraculous recovery, Belle comes to believe that a malevolent force is possessing his body.

Amityville: The Awakening comes from the near ubiquitous Blumhouse who have been having great success in recent years with the Paranormal Activity, Insidious, The Purge and Ouija films (see below), The director is the French-born Franck Khalfoun, a former Alexandre Aja associate who previously made the Aja-produced and written likes of P2 (2007) and the remake of Maniac (2012), before venturing out on his own with i-Lived (2015) and the subsequent Prey (2019).

Amityville: The Awakening lurked in limbo since  shooting completed in 2014 with no less than seven different release dates being announced and then changed. It was long enough for Cameron Monaghan to go from a supporting player here to gain fame as the embryonic Joker on tv’s Gotham (2014-9). Not to mention for the name of Harvey Weinstein that prominently pops up in the credits to go from an industry leader to utterly reviled.

Amityville: The Awakening emerges as a better film than you expect given the problems it had in release. It’s not a great film or even too much more than average on most counts but at least it charts better than the majority of tawdry abovelisted efforts that come with Amityville in the title. Franck Khalfoun’s scares are routine and by the book for the greater part – mysterious shapes and figures flitting on the periphery of the frame, momentary glimpses of an undead Cameron Monaghan, characters popping-up wearing pig masks accompanied by shrieks on the soundtrack. On the other hand, the film does have some amusingly meta moments, like when Bella Thorne decides to host her friends sitting down to watch the 1979 original in the house.

The most interesting part of the film is when it comes to Cameron Monaghan as the comatose brother who slowly starts to respond once in the house. As the mother, Jennifer Jason Leigh’s performance comes with an interesting ambiguity, including a possible dream sequence where she seems to be in the room with son Monaghan caressing her naked body, and the revelations she knew about the house’s history all along and chose it after deliberately abandoning belief in God (an aspect that you wish had been brought out more).

On the other hand, the effective build up of mood often has its payoff cut by the turn to schlock like a swarm of flies all disappearing into neurologist Kurtwood Smith’s mouth or Bella Thorne’s undoing of the oxygen tube intercut with a flash fantasy of a zombified Cameron Monaghan jumping off the bed to attack her, yelling “You’re the one who’s going to fucking die.” It is something that leaves Amityville: The Awakening sitting just between potential effectiveness and schlocky.