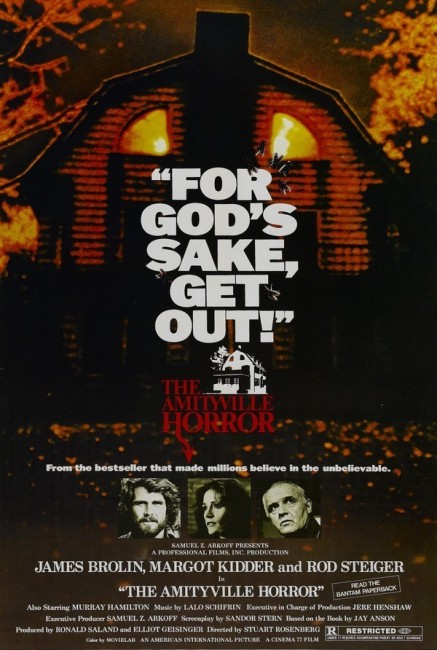 George and Kathy Lutz find a Long Island house going incredibly cheaply and buy it, ignoring the stories of the murders that had taken place there a year before. However, as soon as they move in peculiar things start happening – unexplained noises; the children develop fantasy playmates that tell them about the murders; a babysitter is mysteriously locked in a closet; the priest that comes to bless the house is driven away by a swarm of flies and later dogged by a malaise that blinds him. George then starts to withdraw into himself, letting his business fall apart while obsessively sharpening his axe with grim intent.

The Amityville Horror was adapted from an allegedly true best-selling book published in 1977 by Jay Anson. In the book, the Lutz family recounted the terrifying events that occurred to them over a 28 day period before eventually being forced to flee their house. The Lutz account was later proven on a number of occasions a hoax, not before the Lutzes had made a fortune on the talkshow circuit.

The film adaptation of Jay Anson’s book was a big success too but it is, in a word, boring. It seems to consist of an interminable series of incidents that never semble into a plot. These are served up with a heavy-handed mechanical efficiency that leave the film blandly devoid of its title promise. The publicity machine further demolishes any surprise by telling that the Lutzes only lasted 28 days in the house, so with the outcome already given and not much happening in between, the plot merely becomes a wait for the inevitable.

Although the film dramatises the events of the book liberally, its supposed adherence to the truth of the situation means that not much of the background – the murders, invisible playmates, the agency behind the haunting – are dramatically developed. There are various jack-in-the-box pop-up effects with oozing walls, gathering flies, glowing animal faces in the window, missing money, babysitters locked in the closet and so on – but not much connection or raison d’etre to any of it. The sense of brooding menace developed with all of James Brolin’s axe-sharpening and anti-social stares only ends up dissipating by the end.

This is one occasion where the cliches and tropes of the genre might have actually helped the film. As it is, many of the sequels, which take themselves less portentously and don’t waste any time with pretending everything to be true, are far more entertaining. In a brief part as a priest who is blinded, Rod Steiger characteristically overacts – appallingly so.