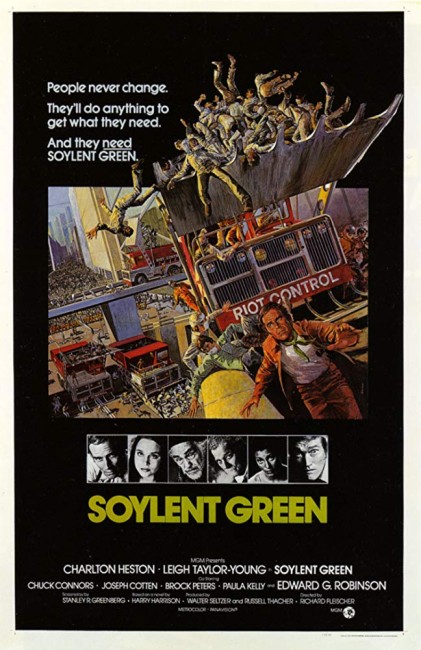 New York of 2025, where the city is bursting at the seams with a population of 40 million people. Police detective Frank Thorn is assigned to investigate after William Simonson, the head of the Soylent Corporation, which provides food for the whole city, is murdered in his apartment. Thorn’s superiors want to dismiss the killing as a petty crime. However, Thorn is unwilling to do so and becomes drawn into a mystery concerning the secret of Soylent Green. Eventually, he uncovers the true secret that Simonson was threatening to expose – that Soylent Green consists of the bodies of the dead, which are being reprocessed as food.

Soylent Green was one of the few big-budget science-fiction films made in the pre-science-fiction blockbuster era. It proved to be one of the most successful films of its time, although such did not seem the case when it was made, with studios being reluctant to back it. Star Charlton Heston had purchased the rights to the Harry Harrison novel Make Room, Make Room (1966) and laboured for several years to get anybody to finance the project.

Eventually MGM backed the project and the film was a reasonable success; indeed, was one of the Top 10 earning science-fiction films at the box-office pre-1977. The film was directed by Richard Fleischer, a solid commercial craftsman who had two other successful science-fiction films behind him, 20,000 Leagues Under the Sea (1954) and Fantastic Voyage (1966). (See below for Richard Fleischer’s other genre films).

The overpopulation theme then came into public consciousness, emerging in the late 1960s amid a host of environmental concerns, pushed in large part by Paul Ehrlich’s best-selling non-fiction work, The Population Bomb (1968), which expressed grave concerns about the exponential rise in world population. A number of other films of the era took up the theme – the likes of Z.P.G. (Zero Population Growth) (1971), The Last Child (1971) and Logan’s Run (1976).

Harry Harrison’s Make Room, Make Room is a fine read. Harrison sets the story on the edge of the millennium where Thorn is a beat detective investigating a murder. In the book, there is no conspiracy – Thorn’s corrupt superiors want to blame the murder on one but the killer turns out to be a petty junkie looking for money. In the film however, this is totally reversed – Thorn is the one who believes in the conspiracy, whereas it is the police who want the case dismissed as a mundane mugging. In fact, Thorn’s murder investigation is of little relevance to the story in the book – for Harry Harrison, the detective story was incidental, merely a means of displaying the grim background of an overpopulated New York City, which was what the story was really about.

Stanley R. Greenberg is clearly a screenwriter with little experience writing science fiction and fails to see what the book was about. This is never more evident than the change of titles from the book. In the book, Soylent Green was a word that Harry Harrison invented – a concentrate made out of soya beans and lentils; in the film, the concatenate word is now meaningless. The detective story has been pumped up to form the centre of the film and Greenberg adds a heavy meaningful theme about Charlton Heston’s detective uncovering the real secrets of Soylent Green – that it consists of dead bodies – which is absurdly melodramatic. In fact, if the oceans have dried up – something that is scientifically ludicrous, as there would be no air left to breathe if they had – and that reprocessed dead were all that there was left to eat, then why the big outrage? It is surely something that, notions of morality and distaste aside, seems the logical choice.

A far more interesting script would not have ended maintaining a lurid tabloid outrage about such a revelation but would have merely slotted this in as part of the grim portrait of the world that it depicts. There are other silly parts – like the addition of a romantic entanglement between Charlton Heston and Leigh Taylor-Young for no other reason than that the film needs a romance. In a much more effective development, the character of Shirl is present in the book, but rather than stay as the furniture in the murdered man’s luxury apartment, moves in with Thorn, only to be unable to handle it when the city decrees that Thorn must share his one-bedroom apartment with another entire family.

Despite Stanley R. Greenberg’s clumsiness, there are still many worthwhile things about Soylent Green. Not surprisingly, and even though usurped by the routine detective story, the background is still the most interesting part about the film. The culture shock aspect – seeing families sleeping in hallways, the idea of a jar of strawberry jam costing $150, Charlton Heston’s reaction to being able to bathe in hot water, the delight in eating real food, and the moving scene where Edward G. Robinson visits a euthanasia clinic and is put to sleep amid montages of a peaceful green world (which had an added element of poignancy in that Robinson died just before the film was released) – make for good science-fiction in that it pictures a human reaction in an environment that is familiar to them but alien to us. Charlton Heston has a doggedly likeable screen persona and Edward G. Robinson gives great support, the two of them working well together.

Soylent Green has been popular. Charlton Heston’s end cry of “Soylent Green is people” has become a popular stock phrase used as jokes in tv series such as The Simpsons (1989– ) and Futurama (1999-2003), even as Frank Black’s computer log-on in the tv series Millennium (1996-9), and was later sampled in a popular dancefloor track by German Goth group Wumpscut.

Harry Harrison is a popular writer within literary science-fiction. This is the only of his books to have been filmed, although other works remain eminently filmable. Alex Cox, the director of Repo Man (1984), for many years planned an adaptation of Harrison’s merciless science-fiction satire Bill the Galactic Hero (1965), which eventually emerged as the painfully bad and cheap Bill the Galactic Hero (2014). Harrison’s Stainless Steel Rat series, which has been occasionally mentioned as a project, would make for a great series of big budget sf/action films some day.