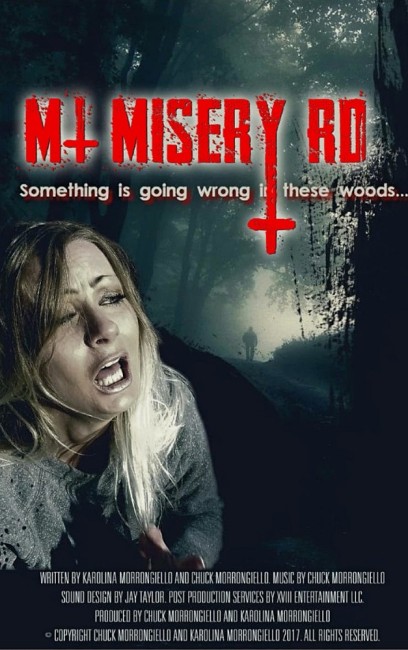 In Tampa, Florida, Charlie receives a package of photos and drawings sent by his friend Mike, concerning the legendary haunted woods on Mount Misery Road in Huntington, Long Island. Charlie and his girlfriend Buzi are both avid ghost hunters and head to Mount Misery Road, intending to make a video about the experience. People they meet along the way tell the history of Mount Misery Road as being former Indian land and how an asylum was built there, while urging them to stay away because the area is haunted. Charlie and Buzi press on and enter the woods, only to find the area is indeed haunted.

Mt. Misery Road comes from Chuck Morrongiello, who in his day job works as an insurance and finances representative in Tampa, Florida and also has a history as a rock guitarist. Chuck and his wife Karolina, who comes from Poland, made the film on their iPhones on a budget of $2000.

Mt. Misery Road is amusing to watch for its unintentional hilarity. Chuck and Karolina are the only characters on screen for the bulk of the running time. He looks and dresses like an aging rocker – the film opens with about five minutes of him driving his Ford Challenger while heavy metal plays on the soundtrack. She looks like a bimbo airhead – when we first meet her, she walks into the room in fluffy slippers. As she and Chuck go through the photos, she accompanies everything she says with an inane little giggle and keeps giving an affected “oh my gaaaad” with a total lack of conviction. As they set off, they stop at bar where she dances, while a song called Shake Your Booty plays on the soundtrack and Chuck’s camera indeed pans down to show off her booty for us.

Karolina gives an incredibly bad performance throughout. When they arrive at the destination, she wanders through the woods (while wearing a pair of pyjama botoms) pointing at random things and saying with eyes agog. “Wow, that’s spooky … that’s amazing … Look at that, that’s goofed out … that’s creepy … let’s go find more stuff … Oh my gaaaad.” They come across a fallen tree with a metal plate attached to it and everything overgrown with lichen and go; “Maybe that’s part of the asylum. A post,” while later determining that some piled stones must be evidence of the abandoned asylum.

In every respect, the film follows the standard playbook established by The Blair Witch Project (1999) – couple head off with a camera into an area of the woods that is reputed to be haunted. Things happen – much running, screaming and blurry camerawork before the camera goes dead. The end. What is rather funny is when Chuck and Karolina keep encountering other characters who give stringent warnings about going into the woods – Curt Wyka even tells them at one point: “You have to be a certain level of stupid to go after everything I’ve told you” – but promptly ignore these and continue on in their inanely happy way.

In some releases, this was sold as an Amityville film called Amityville: Mt. Misery Rd – one of the 25 odd films that use the name – although no mention is made of Amityville or its notorious house anywhere throughout this film. The sole connection is that Huntington, the location of the real-life Mount Misery Road, is a 26-minute drive north of Amityville. Both franchises also tap the claim that the places are located on Indian burial ground.

Mt. Misery Road is not the worst ever Blair Witch copy – that’s reserved for The Bare Wench Project (1999) and any of its sequels or Da Hip Hop Witch (2000). It is however the single worst film to be made in the lengthy list of films with Amityville in their name.