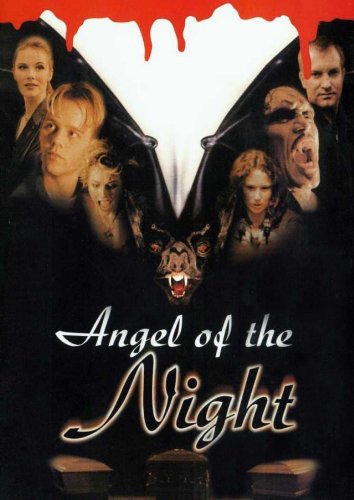 Rebecca pays a visit to her ancestral mansion, along with two friends. There they find a book that tells the story of Rebecca’s ancestor, a priest who was sent by his townspeople to kill a vampire and did so, only to be bitten and made a vampire himself. As the vampire Rico Mortis, he has cast terror across the ages and into the present-day.

It is not long into this Danish vampire film before you realise that you have sat down to watch a turkey. The film is incredibly badly directed and written, flatly lit, the actors are unconvincing and the dubbing terrible. After the priest’s confrontation with an utterly laughable werewolf creature about 15 minutes into the film, you are almost entirely ready to dismiss Angel of the Night as Z-grade video fodder.

However, Angel of the Night surprisingly turns around and almost manages to redeem itself. It intermittently turns into a cod-John Woo-styled action movie with all manner of amusing scenes with vampires using martial arts, hunters holding vampires off with guns in Mexican standoffs, stylised slow-motion moves whipping out stakes and crucifixes and the like. It almost becomes what one wishes From Dusk Till Dawn (1996) would have been more of. It is in these moments that director Shaky Gonzalez whips up a B-budget ferocity that works quite entertainingly. However, these scenes are intermittently interspersed in an episodic plot and when the action flags, the rest of the film reverts to Z-grade junk.

Angel of the Night was released by Fangoria Films, the distribution arm of Fangoria magazine, who have acted as distributors for a number of obscure international horror films.

Danish-based director Shaky Gonzalez subsequently went onto make the drug horror film One Hell of a Christmas (2002), an episode of the horror anthology Speak of the Devil (2005) and The Last Demon Slayer (2011).