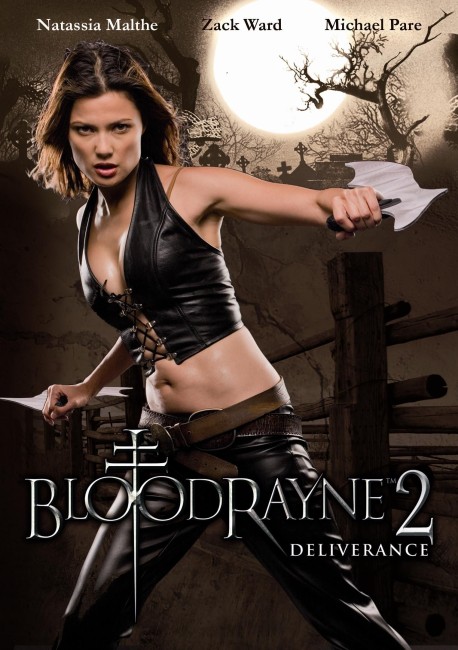 Rayne arrives in the Wild West town of Deliverance in search of vampires. She discovers that Deliverance has been taken over by a vampiric Billy the Kid and his cohorts who hold the town’s children hostage. Rayne realizes that Billy’s plan is to wait until the railroad arrives in Deliverance and use this as a means to transmit vampirism across the country. Billy sentences Rayne to hang but she makes an escape. Along with Pat Garrett, she creates a team of vampire hunters to return to Deliverance and despatch Billy and his gang.

Uwe Boll has gained a reputation as the worst director currently at work in the world due to films like House of the Dead (2003), Alone in the Dark (2005) and Postal (2007). Boll’s BloodRayne (2005), based on the 2002 Majesco computer game of the same name, was a venture into vampire action set in a loose 19th Century setting. As with most Uwe Boll films, it featured much furious action, considerable bloodletting, an incomprehensible plot and some disastrous miscasting – notably the presence of Oscar-winning actor Ben Kingsley as the king vampire.

Bloodrayne: Deliverance is a sequel to BloodRayne. While BloodRayne did do the rounds of some theatrical screenings, Deliverance has only been intended as a direct-to-dvd release. Boll and several members of his production team are the only constant between the two films. None of the actors from the first film are present. The role of Rayne, essayed in the original by a wimpy Kristanna Loken, is recast with the substantially better Natassia Malthe who gets the tough poses down not too badly. Rayne is the only continuing character, although members of the Brimstone Society do make an appearance. The setting has been updated from 19th Century Europe to the Wild West, although neither of these come anywhere near the setting of the game, which had Rayne and the Brimstone Society fighting Nazis in the 1930s.

I am not one of the naysayers who regards Uwe Boll as the cinematic Antichrist. He has made some poor films but there have been and are a great many worse directors currently at work. Certainly, BloodRayne: Deliverance is somewhat better than Uwe Boll’s usual standards – there are some halfway okay production values, a passable competence on most counts, a story than can be followed and a lack of the usual disastrous miscasting (apart from a completely whacked-out performance from Michael Eklund as the gunslinging priest who gives the impression that someone spiked his daily dose of crystal meth with something bad).

For the plot, Uwe Boll’s writers have appropriated the basics of The Magnificent Seven (1960) with Natassia Malthe having to gather three fighters to join her and then set out to save the town from the thrall of the vampires. The script also winds in a vampiric version of Billy the Kid and has Sheriff Pat Garrett (who eventually shot the real-life Billy the Kid) revealed as one of Rayne’s Magnificent Four. (Maybe the scriptwriters were inspired by Billy the Kid Versus Dracula (1966) or perhaps Kim Newman’s book Anno Dracula (1992), which featured Billy the Kid, along with most of the characters from late 19th Century history and fiction, as vampires).

On the minus side, BloodRayne: Deliverance is slow and not too much happens. Everything is low-key until about the last third when Uwe Boll gets into the vampiric shootouts – much of the film seems to have been construed so that Boll can throw together vampires and the gunslinging imagery of the Western.

There is an effectively gimmicky scene where Natassia Malthe bursts into a room and has to hold up a weight that prevents a rope from falling that will hang several of the children, only for Zack Ward’s Billy the Kid to stand there and feast upon the necks of one of the children and taunt her while she is unable to move.

Deliverance is very much a film of poses – as witness Natassia Malthe who rather absurdly rides through the snowy wastes wearing only a stylish leather coat and a midriff-bearing vest underneath, not to mention wielding blades that have been designed more for cool than convincing lethal effect.

Uwe Boll subsequently made Bloodrayne: The Third Reich (2011) also with Natassia Malthe, which moves the action forward into World War II with Rayne fighting Nazis. This could be considered the best of the series.