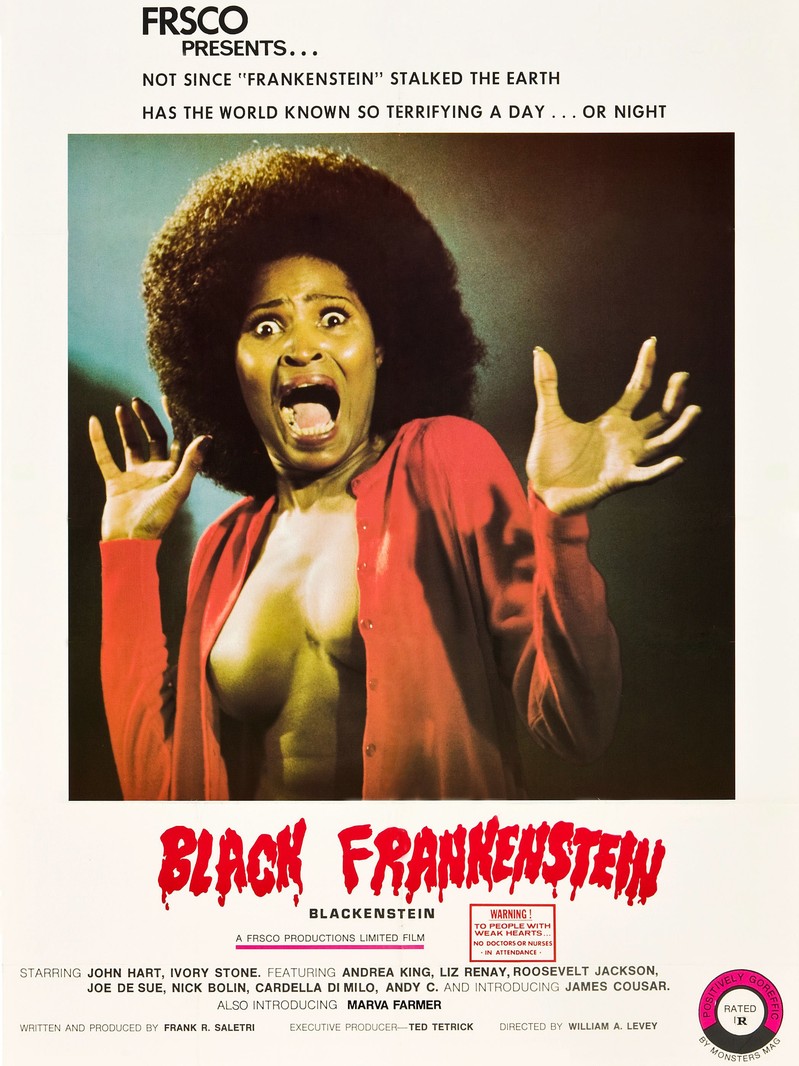 aka The Black Frankenstein

Winifred Walker, an African-American doctor of physics, travels to L.A. to see her old teacher Dr Stein and asks to work for him again. Winifred’s boyfriend Eddie Turner has returned from service in Vietnam with his arms and legs blown off. Stein says that he has an experimental surgical procedure that will help Eddie to walk again. Eddie agrees and Stein’s surgeries are successful. Stein’s lab assistant Malcomb then tells Winifred that he is in love with her. When she says they she only loves Eddie, a hurt Malcomb angrily adds chemicals to the mix of Eddie’s drugs. The result causes Eddie to change into a hulking monster who escapes from the lab and begins blindly killing.

The Blaxploitation fad of the 1970s was created by Sweet Sweetback’s Baadasssss Song (1971) and popularised by the crossover hit of Shaft (1971). A great many very similar films followed all featuring Black actors as the heroes. This was something that had not been seen before, apart from isolated incidents. Sweet Sweetback‘s novelty was taking the Black man’s point-of-view in an angry anti-establishment drama, while Shaft incarnated the Black man as a virile hero, the embodiment of cool and with an army of women draped from his arms. Later developments in the genre introduced the eye-popping pimp outfits and the Afrod kickass Black heroine immortalised by Pam Grier.

One of the popular films to immediately jump aboard the Blaxploitation fad was Blacula (1972), which took the vampire film that was popular around the time – most notably with the Hammer Dracula sequels – and gave it a Black-face twist. This was successful enough that it created a series of other horror variations all cast with Black actors. Versions of Frankenstein and Dracula always seem to travel like yin and yang – there is rarely one without the other – and Blacula was quickly followed by Blackenstein here. To follow would be Blaxploitation variations on other horror themes such as the vampire film Ganja and Hess (1973), the exorcism film Abby (1974), the haunted house film The House on Skull Mountain (1974), the zombie film Sugar Hill (1974), Dr Black and Mr Hyde (1976) and the possession film J.D.’s Revenge (1976).

The great disappointment of both Blacula and Blackenstein is that they are never amount to anything more than rehashes of the horror staples cast with African-American actors. (The same cannot be said for Dr Black and Mr Hyde, which turned the original into a remarkable racial parable). Blackenstein gives the clear impression that it was quickly slung together to follow the success of Blacula. There is nothing interesting about its treatment of themes – the story could easily have been played out with a cast of white actors and made no difference to the film.

The one fascinating idea the film comes up with is that the monster is a Vietnam War veteran who is pieced back together by the doctor after his limbs were blown off. Unfortunately, while the Vietnam War and its protests were in full swing around this time, the film fails to make any kind of sociological resonance out of this. unlike the fascinating Dead of Night (1974) that came out the following year. Part of the reason, one expects, is that sentiments about the Vietnam War were still raw and uncertain in the American public’s consciousness.

Director William A. Levey churns the film out with indifference. All of the action transpires with an utter dullness – the monster shuffles about at a snail’s pace. The film even has an interlude in the middle of the monster’s escape for a stand-up comic to do his act and then a blues singer to sing. Levey creates one imaginative scene with the monster’s shadow passing all the way around the wall of the laboratory. However, when he pulls this a second time and we have to watch the monster shuffling the whole way around the lab again, it is tedious.

Blackenstein was the first film of director William A. Levey. Levey went onto make the softcore alien visitor sex comedy Wham Bam, Thank You Spaceman (1975), The Happy Hooker Goes to Washington (1977) and returned to horror with the cheap Hellgate (1989) and the interesting asylum horror Committed (1991).