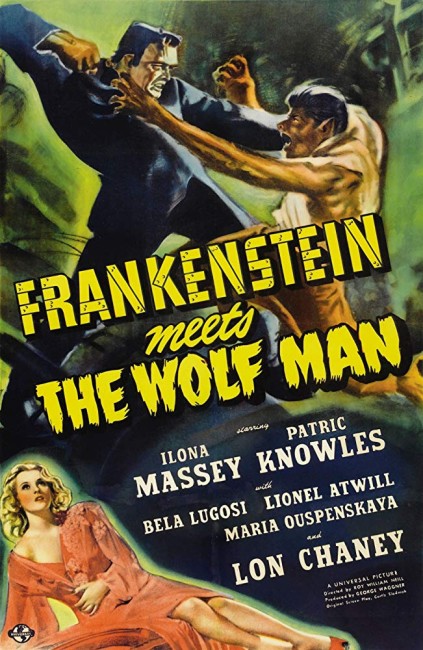 In Llanwelly, Wales, grave robbers break into the crypt of Larry Talbot and he is revived under the light of the full moon. At a hospital in Cardiff, the authorities fail to believe that he is Larry Talbot. Larry only wishes to die and free himself of the werewolf curse. He finds the old Gypsy woman Maleva who believes that Baron Frankenstein will hold the answers and so Larry travels to Vasaria. There they find that the only Frankenstein descendant left alive is his granddaughter Elsa. Larry finds the body of the Frankenstein monster encased in ice and revives and befriends him. The solution comes when Dr Mannering, who tended Larry in Cardiff, comes searching for him. Obtaining Frankenstein’s notebooks from Elsa, Mannering discovers a way to free Larry from the werewolf curse.

The period 1931-41 was a great era of horror. During this period, Universal created a body of classic monsters – Frankenstein, Dracula, the Invisible Man, the Mummy and the Wolf Man. However, by the mid 40s, The War had forced cutbacks in terms of budget and personnel shortages and Universal compensated by churning out a series of sequels featuring their famous monsters and then, beginning with Frankenstein Meets the Wolf Man, a series of novelty team-ups where the monsters met one another. This was the very first of what we call Crossover Films that extend to modern efforts like the MCU where copyrighted characters under a similar roof meet up on screen.

The novelty of the monster team-up at least gave the Frankenstein series a direly needed shot in the arm, even if Frankenstein Meets the Wolf Man is routine in every respect. The script comes from Curt Siodmak, one of the great B movie hacks who wrote the scripts for films such as The Ape (1940), Son of Dracula (1943), Bride of the Gorilla (1951) and Creature with the Atom Brain (1955), among numerous others, along with creating The Wolf Man in the first place. However, Curt Siodmak fails to combine the creatures in any inventive way – Frankenstein Meets the Wolf Man is more of a werewolf film than it is a Frankenstein film, with the monster being of relative unimportance to the plot.

It is dully set up – Lon Chaney Jr’s Wolf Man seeks the Frankenstein diaries on the slim pretext of finding a cure for his condition, he pulls the monster from entombment in ice, finds yet another member of the Frankenstein family and before anything can happen a crazed villager blows up a dam destroying the castle and lab. Things happen for absurdly melodramatic reasons – about to pull the switch that will revitalize the monster, Patrick Knowles for no apparent reason suddenly changes his mind and announces “I can’t destroy Frankenstein’s creation – I have to see it at its full power.”

Director Roy William Neill (who also made most of the Basil Rathbone Sherlock Holmes series for Universal) directs in a thoroughly pedestrian way with none of the flair that James Whale or Rowland V. Lee injected into respectively the first three films. The lab sequence, reusing the equipment from The Ghost of Frankenstein, is wimpy.

There is certainly an interesting cast line-up. Bela Lugosi plays the monster. One may be aware that Bela Lugosi was originally to have played the monster in Frankenstein but was not interested in playing a part where his face would be hidden beneath makeup. Since then, the fame that Lugosi found after playing the title role in Dracula (1931) had flagged to B and Z movie parts and Lugosi recanted his decision and decided to play the role after all. Alas, Bela Lugosi makes for the worst Frankenstein monster in the entire series. His creature stumbles about in gaping strides with arms out in front as though it were drunk (which considering Lugosi could well have been the case). What made the Frankenstein series so popular in the first place was the sense of pathos that Boris Karloff invested the creature with and one suspects that if Bela Lugosi had played the creature as intended the series would not have been the success it was.