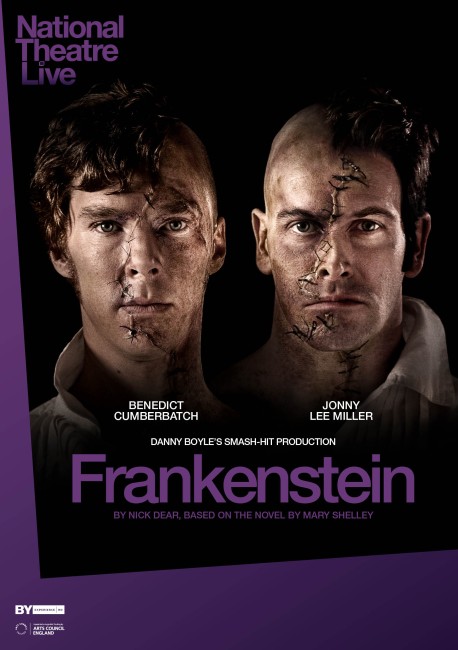 A creature awakens with no memory, no capacity for speech and barely even the ability to control its body. Learning to walk, it stumbles out into the world where its hideous and scarred appearance causes people to flee in horror. It finds refuge near the cottage of the blind de Lacey, a former academic, who welcomes the creature. Over the space of a year, he teaches it to speak and educates it. However, de Lacey’s son and daughter-in-law return and recoil in horror at the creature’s appearance. In revenge, the creature burns all of them alive in the cottage. Following the notebook he took with him, which details how he was constructed, the creature travels to Geneva in search of his creator Victor Frankenstein. He finds and kills Frankenstein’s younger brother William to draw Frankenstein into a confrontation. There the creature demands that Frankenstein build him a female companion to ease its solitude and loneliness.

Frankenstein is a unique production. I am reviewing it here as a film but in fact it is a stage play. There have been plenty of films adapted from stage plays before and many films that consist of recordings of stage plays as they were being performing live. In this case however, Frankenstein is a play where each of the performances were broadcast live onto cinema screens around the world so that audiences could sit in theatres and watch the play take place live halfway around the world from them. It is the ingenious harnessing of telepresent technology to give a new life to theatre. A number of performances of notable classic and modern plays have been similarly screened in this fashion as part of the National Theatre Live program since 2009.

Frankenstein was written by Nick Dear, who has conducted a number of other adaptations of classic works for stage, as well as written screenplay adaptations of Jane Austen’s Persuasion (1995), The Turn of the Screw (1999), Cinderella (2000) and the tv biopic Byron (2003). The most interesting name among the crew line-up is that of Danny Boyle, the British film director of works such as Trainspotting (1996), The Beach (2000), 28 Days Later (2002), the Academy Award winning Slumdog Millionaire (2008), 127 Hours (2010), Trance (2013) and Steve Jobs (2015). Boyle has been expanding out beyond film of recent with this, his first stage production, and subsequently directing the ceremony for the 2012 London Olympics. (A list of Danny Boyle’s other genre films is at the bottom of the page).

Frankenstein premiered at the National Theatre in London where it ran between February and May of 2011 and made a return season in 2012. Four of these performances, two from each of the runs, were broadcast live to cinema screens. One of the most unique thing about this verson is that the roles of Frankenstein and his creation alternated between the lead actors Jonny Lee Miller and Benedict Cumberbatch, who would swap about in the parts on alternate nights. [In an ironic coincidence, the play ended up featuring Benedict Cumberbatch who came became a hot name in the role of Sherlock Holmes in the modernised BBC tv series Sherlock (2010– ), while just after the play finished its run, Jonny Lee Miller was cast as a modernised Sherlock Holmes in the US tv series Elementary (2012– )]. The version of the play seen here features Benedict Cumberbatch as the creature and Jonny Lee Miller as Frankenstein.

The one thing that must be said is that Danny Boyle and Nick Dear gives us a very different Frankenstein to any of the previous films adaptations (see below for listing of these). The play has a slow opening scene – nearly ten minutes with Benedict Cumberbatch’s creature crawling and stumbling around the stage, trying to discover how to walk, where everything is lit in orange and is abruptly punctuated by the brilliant flash of light bulbs. It is a scene that in its length becomes in danger of causing an audience to switch off before the play has even begun proper. The second is a scene that similarly puzzles more than it clarifies – where a group of drunken townspeople travel across the stage on a giant infernal machine of obscure purpose, while the background is lit up by electric flashes and they sing hymns, before the creature sees a hooker (Ella Smith) but she becomes repulsed and scared by his appearance. One is puzzled by the scene as there is no equivalent of it in the book or any of the movies and you are not sure whether it is intended as some obscure metaphor of the Industrial Revolution or what.

It becomes apparent that Nick Dear’s adaptation has switched the point-of-view focus from Frankenstein (who narrated the story in the book) to that of the creature. Indeed, this could be called Frankenstein: The Creature’s Story. The play follows the creature’s waking through its growth of intelligence and painful struggle to become used to its body. The entire first half strips the rest of Frankenstein away and tells the story in the raw, emotional terms of the creature coming to life and slowly trying to fit into the world. This is such that, apart from a few utterances during the encounter with the townspeople in the second scene, it is 25 minutes into the play before any dialogue is spoken. In the role, Benedict Cumberbatch gives a fantastic performance that begins as something stumbling, imbecilic in its innocence, passing through the growth of his self-awareness to the point where he is posing difficult philosophical questions to his creator. In an unusual touch, the creature’s awkward, spastic motions are never left behind and remain throughout, even as the creature becomes more intelligent.

Nick Dear emphasises a number of aspects of the Mary Shelley story that many other film adaptations cut – the scenes with the creature learning to speak by hiding with the de Lacey family; its meeting with and murder of Frankenstein’s younger brother William; Frankenstein’s flight to the Orkneys to construct the creature’s bride; and the climactic pursuit up into the Arctic. On the other hand, the play also dispenses with many of the scenes that other adaptations regard as high points – there is no scene involving the bringing of the creature to life, for instance. Indeed, Frankenstein does not even turn up until the halfway point of the story and is a relatively distant character (although Jonny Lee Miller plays the role with an effectively autocratic superiority).

There is the odd change for the better – rather than having the creature learn to speak by listening in on the de Lacey family teaching the newlywed Turkish wife to speak, as Mary Shelley does, the film has the blind old man (Karl Johnson), a former academic, befriending and educating the monster – which allows Nick Dear to pay tribute to the famous incarnation of the character in Bride of Frankenstein (1935) – and teaching him how to speak and about literature. Indeed, this is the only filmed version of Frankenstein that gives the creature his education in the classics and has him quoting stretches of Paradise Lost (1667).

The play also adds a brutal scene where the creature sets the de Lacey family alight in their cottage after the son and his wife react in horror to his appearance. This is a scene that does not exist in the book and is a radical and incisive rewriting that in one’s opinion improves over Shelley. Despite all of the changes, what we end up with is an adaptation of Frankenstein that travels closer back to the book than almost all the other film versions put together. The closest we had before was Mary Shelley’s Frankenstein (1994) with Kenneth Branagh and Robert De Niro, which followed to the book in a more straightforward way, although downplayed the literary level that is retained here.

Danny Boyle has determined to give us a unique staging. The sets are sparse but inventive, particularly in the ways they are used – the drawing room of the Frankenstein house is simply turned around to become the ship that Frankenstein travels aboard to the Orkneys. Particularly eccentric are some of the castings – Frankenstein is played by a Caucasian actor, yet his father is played by Black actor George Harris, while Elizabeth is also Black actress Naomie Harris (who first came to attention in Danny Boyle’s 28 Days Later). This is peculiarly something that is never commented on or justified, is just allowed to stand on its own.

Frankenstein: A Modern Myth (2012) was a documentary about the play and the enduring Frankenstein legend.

Danny Boyle’s other genre films include:- A Life Less Ordinary (1997), a mix of abduction comedy and a fantasy film; the big success of the zombie holocaust film 28 Days Later (2002); the hard science sf film Sunshine (2007); and the alternate history Yesterday (2019).