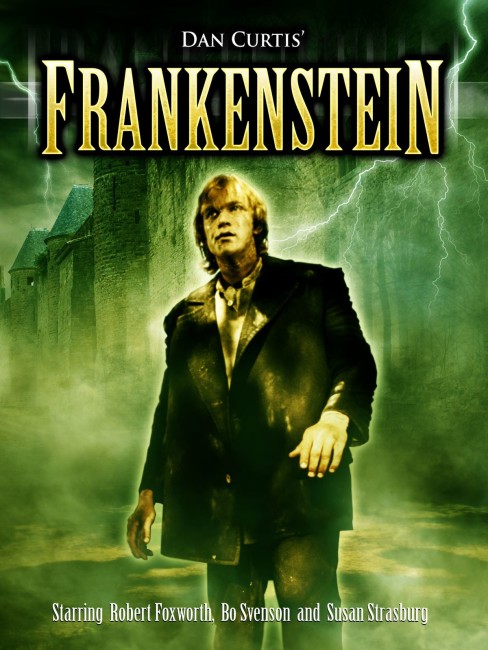 Ingolstadt, 1856. Victor Frankenstein is a brilliant student at the university but is scorned because of his unconventional theories about reviving the dead. Determined to prove these, Frankenstein harnesses electricity from a lightning storm to revive a giant creature that he has pieced together from parts of dead bodies. The creature, not knowing what it is doing, kills Frankenstein’s assistant and then flees into the wilderness. Shunned because of its scarred visage, it hides in a woodshed near a cottage in the forest. There it is able to learn to speak by overhearing a family teaching English to the son’s Spanish fiancee. The giant then returns to Ingolstadt and demands that Frankenstein create it a mate. However, Frankenstein is unable to go through with doing so again and destroys the experiment. The giant then promises revenge against him.

The faithfulness of this version is especially notable during the middle third. We get the classic scene with the monster hiding in the woodshed in the forest secretly observing the blind daughter and the old man, learning to speak as she hears the son’s new Spanish wife being taught English, before he emerges to befriend the blind daughter but is driven away when the sighted family return. (The scene is slightly different in the book – it is the old man that is blind, not the daughter, and the wife is Turkish not Spanish – but this conducts an effective replication of the basics). In fact, this was the first time in any Frankenstein film up to that point that we have had a monster that can speak – or at least voice more than a couple of words in Pidgin English.

We also have the murder of Frankenstein’s brother William by the monster (although nothing of the framing and hanging of the maid Justine Moritz), as well as the scenes where Frankenstein and the monster meet up, he promises to make it a mate but then finds he cannot go through with such again. The meeting between Frankenstein and monster is given an interesting new spin here that no other version has ever done – that the two meet up again by accident but the monster does not recognise Frankenstein as his creator.

On the minus side, Dan Curtis’s Frankenstein has been undeniably made on the cheap. Frankenstein’s laboratory looks cramped, especially in comparison to the other screen versions (notably the magnificent laboratories in the Universal films) – all that we see of the requisite lightning storm that brings the monster to life are flashes that light up the laboratory from outside the skylight window.

The show is also hampered by Glenn Jordan’s run-of-the-mill tv direction. There is rarely much in Jordan’s direction that attempts to make Frankenstein seem more than say a standard tv soap opera episode and little to pump the story up for atmosphere. This is particularly noticeable at the end of the film, which substitutes Mary Shelley’s moody climax where Frankenstein pursues the monster into the Arctic for a more mundane one where Frankenstein pursues the monster to the ruins of an abandoned mansion and dies after falling on a protruding piece of debris, after which the monster is shot by the authorities and poignantly dies with Frankenstein’s body in his arms weeping “forgive me”.

As Frankenstein, Robert Foxworth, later of Falcon Crest (1981-90) fame, seems too much the handsome leading man type to seem right as the brooding, guilt-ridden Frankenstein. As the monster, Bo Svenson has some of the innocent, hulking lugubriousness that Boris Karloff did in his classic essayal of the role. His monster seems more of a good-natured simpleton. (The casting of Bo Svenson does give us the odd novelty of the screen’s first (only???) blonde Frankenstein monster). Another interesting twist is Susan Strasberg’s Elizabeth. Here Elizabeth, who now also becomes Henry Clerval’s sister, is played as much more of a modern woman rather than the dutiful fiancee who is merely there to be abducted – she even decides to leave Frankenstein because he has been neglecting her. This is probably the strongest characterisation that Elizabeth has had in any screen version so far.