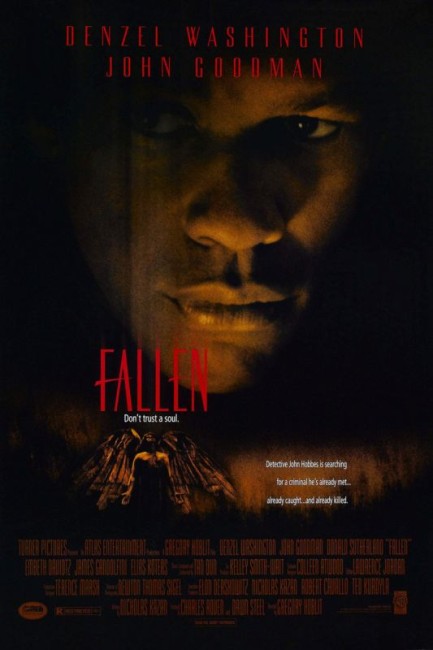 Detective John Hobbes sees serial killer Edgar Reese go to the gas chamber. Not long after, Hobbes must deal with a baffling series of murders that appear to be being conducted by someone using identical methods to Reese. As Hobbes investigates, it appears he is not dealing with a mortal but a demon that is capable of passing between and possessing bodies simply by touch. He realises that this is the demon that inhabited Reese and that it has returned to taunt him and destroy his life.

Going in to see Fallen, one didn’t expect it to be much at all. The plot seems a warmed-over version of the mini-vogue of executed serial killers come back from the electric chair films that were briefly the in-thing around about 1988-9 with the likes of Prison (1987), Shocker (1989), The Horror Show (1989), The First Power (1990) and subsequent stragglers such as the ridiculous Judge and Jury (1996) – but revamped with an A-budget. Just as equally, it is drawing on the basic premise of The Hidden (1987), albeit with that film’s premise of a body-hopping alien replaced with a body-hopping demon. In virtually no time at all, Fallen proves that simply through good writing an old familiar plot can be made to work wonders once again. The result is a surprisingly good film.

Fallen is made by Gregory Hoblit, previously a tv director who won Emmy Awards for his work on shows like Hill St Blues (1981-7) and L.A. Law (1986-94). Hoblit made the jump to feature films with the impressive courtroom drama Primal Fear (1996) and subsequently went onto the intelligent time-travel film Frequency (2000) and thrillers like Fracture (2007) and Untraceable (2008). There is a surprising similarity of themes between Primal Fear and Fallen – you could say that Primal Fear is a film about a killer who has one body but several personalities; while on the other hand, you could say that Fallen is about a killer who has one personality but several bodies.

Gregory Hoblit does a fine job with the film. The script is handicapped in that its central idea – that of a demon that can pass between bodies by touch – has been given away by the publicity machine. In spite of the fact that one knows what is going on for a good half-hour before the detective hero clicks on, both Hoblit and the script unfold these revelations with a high degree of tension and suspense. Hoblit generates some marvellous scenes with the demon passing from body to body amongst people at the police station and in the street, all the while taunting Denzel Washington. There is also a beautifully written twist ending – the first one has ever seen that manages to so twist first-person voiceover completely on its head.

Fallen kept reminding of Se7en (1995), which seems to have been a strong influence. Both films employ the same densely textural washed-out lighting scheme. Both are very similar films – about detectives who are confronting a Biblical menace (Se7en a serial killer using the motif of the Seven Deadly Sins, Fallen an actual demon) wherein the Biblically Apocalyptic is raised into a looming millenarian metaphor for moral social decay. Although, where Se7en‘s moral metaphors were dazzlingly literary, Fallen‘s seem stuck down in the idiom of B horror movies. Both films also contain one grisly scene where the film seems to hang still for a moment and toy with the audience as to whether it is going to do the unthinkable and kill off one of the detective hero’s loved one’s. Nevertheless, for its ability to move with tense and excitement and juggle a plot that keeps catching one perpetually unawares, Fallen is well above average.