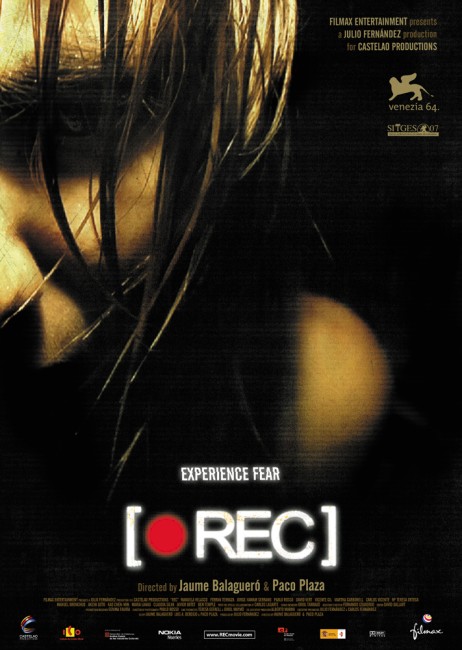 Angela Vidal, host of late night Barcelona tv show ‘While You Sleep’, spends the evening with a group of firemen for an episode of the show. She and her cameraman ride along with two of the firemen on a callout. They enter an apartment building to help the elderly Mrs Izquierdo. Suddenly, Mrs Izquierdo turns and tears out the throat of one of the men with her teeth. As they try to get the injured man to a hospital, the authorities close the building off and declare a quarantine zone but will not explain why. As those trapped inside try to work out what is going on and get to freedom, the wounded man becomes rabid and bites others. So too do those who are bitten. Soon the remaining survivors are being hunted through the building by the infected.

[Rec] is a collaboration between two top contemporary Spanish horror directors. Former horror fanzine editor Jaume Balaguero has been a director on the rise in the last few years with efforts like The Nameless (1999), Darkness (2002), Fragile (2005), Sleep Tight (2011) and Muse (2017), as well as the story for The Nun (2005), the script for Inside (2016) and produced Summer Camp (2015). Paco Plaza is the relative newcomer, having previously directed the horror film Second Name (2002), the excellent Romasanta: The Werewolf Hunt (2004) and the subsequent true-life supernatural manifestation film Veronica (2017) and The Grandmother (2021) about a sinister senior. Producer Julio Fernandez and production companies Filmax International and Castelao Productions have been behind the majority of these.

[Rec] has a number of similarities to George A. Romero’s Diary of the Dead (2007), which had its premiere only a month after [Rec] did. Both [Rec] and Diary of the Dead are depictions of an outbreak of zombies, where both films have been shot with faux reality camera as though we were watching a documentary a la The Blair Witch Project (1999). (This was of course before Paranormal Activity (2007) became a massive hit in 2009 and sparked off what became known as the genre of the Found Footage horror film).

Where George Romero made Diary of the Dead into another of his sweeping apocalyptic works, bitingly questioning the nature of truth in the media, [Rec] lacks any interest in social perspective and keeps itself as a fast and furious horror show, contained within the locale of an apartment building.Romero cheated somewhat on the camera’s eye perspective in Diary of the Dead – adding music, using smooth camera set-ups and contriving reasons to have two camera-people at times, even showing the editing in of security camera footage so as to get exterior shots.

By contrast, [Rec] keeps the vision purer – it retains the single camera’s eye and is full of ragged handheld camerawork in a series of wildly vertiginous shots that have the tendency to leave one feeling seasick. At most, [Rec] cheats by giving us a number of situations where you keep wondering how someone could retain frame of mind to keep filming as such things are happening.Balaguero and Plaza keep explanations for what is going on scanty. Indeed, we start off thinking we are watching a zombie film before in the last ten minutes or so, the script takes an abrupt dogleg to show that this is actually a case of demonic possession.

Possession as the cause of a zombie outbreak is something we have seen before in the Italian Demons (1985) and some of Lucio Fulci’s films but it never fully gels in any of these cases – as here, something does not fundamentally work in trying to mix a spiritual condition with an infection that gets spread by saliva and is treated as an contamination by authorities. Furthermore, the set-up leaves us with a number of questions – if the Romanian girl was locked up in the penthouse apartment, how did the infection spread to the rest of the building? How did the authorities get wind of it and create a quarantine zone when the infection had not even spread beyond a single room?

Nevertheless, what Jaume Balaguero and Paco Plaza are trying to do is create a full-on zombie film. Once the outbreak spreads, they keep the action moving at a fast pace. [Rec] is not a film that wades in gore but there are some brutal and abrupt jolts in the scenes with people grabbing others unexpectedly, the emergence of the possessed little girl, and especially the scenes with the demented old lady attacking people and Ferran Terraza’s gleeful wading into action, dispatching zombies with a sledgehammer.

The scenes that take [Rec] into the genuinely harrowing are the last few minutes where we venture up into the penthouse attic and the entire scene switches to infra-red lighting with the two survivors stumbling blindly while something unearthly creeps about in the dark with them. The final shot has a genuine nightmare grimness.

Jaume Balaguero, Paco Plaza and Manuela Velasco returned with [Rec] 2 (2009), while Plaza on his own made [Rec]3: Genesis (2012) and Balaguero [Rec]4: Apocalypse (2014). [Rec] was given an English-language remake as the also well worthwhile Quarantine (2008) starring Jennifer Carpenter as Angela, which in turn led to a dvd-released sequel Quarantine 2: Terminal (2011).