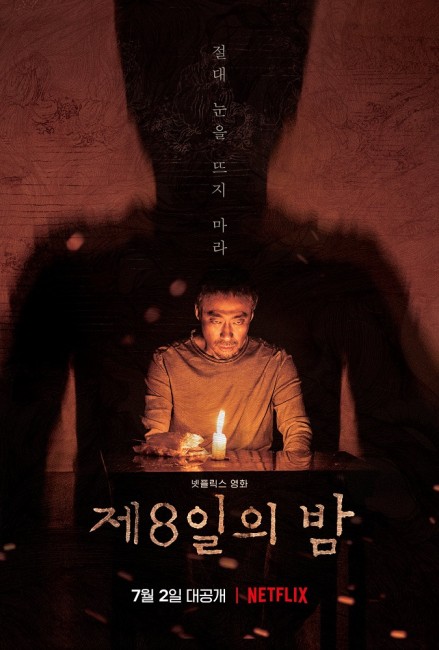 2500 years ago, The Buddha stopped a monster from entering the world. The monster’s red and black eyes survived but were placed in sarira caskets and separated across the world in places of safekeeping. In 2005, Professor Kim Joon-cheol found the buried location of the Red Eye on the India-Pakistan border but was ridiculed and his discovery called a fake. In the present day, the professor conducts a ceremony under the red moon to unleash the Red Eye. The monk Chong-seok, who has taken a vow of silence, is despatched by his master to find the former monk Seonhwa. Seonhwa reluctantly takes Cheong-seok along with him as they set out to track the path of the Red Eye as it moves across the city possessing people and leaving a string of dead bodies in its wake. Their following the trail also attracts the attention of the police detective Kim Ho-tae who suspects Seonhwa is the killer. The Red Eye then takes over the body of Dong-jim, Ho-tae’s protégé on the force. Everyone comes together as the eighth night approaches as the two eyes seek to reunite.

The Korean variation on the Possession Film is a relatively new advent. While there may well be other works that I am not aware of, the first Korean possession film to appear was The Priests (2015), which drew on the essentials laid down by The Exorcist (1973) but was still rooted in Catholic theology. This was followed by the very strange, almost unclassifiable The Wailing (2016). Far more adventurously, The 8th Night is a possession film that takes place within Buddhist beliefs.

The mythology that the film builds around its characters and their beliefs is fascinating. The team of exorcists are a fascinating bunch – Nam Da-reum as a novice monk who has undergone a vow of silence (and it would seem also one of poverty) who is sent out into the world on a mission; Lee Sung-min is the seasoned ex-priest who sits in his room as the shadows of souls who are begging his help ascending come to him. He also goes into action against the demon wielding an axe with sigils painted on it in blood.

After the initial set-up, the film slows down for a time with the parallel plot about Park Hae-joon’s detective investigating the deaths across the city. Things become decided outlandish in the scene with priest Lee Sung-min facing down the possessed schoolgirl (Park Se-hyun) in an alleyway where she abruptly manifests the red eye out of her cheek along with an unnveringly fake smile. This is all before Hae-joon’s offsider Kim Dong-young turns up and thinks the worst when he sees Sung-min threatening a schoolgirl with an axe whereupon she abruptly turns and jumps on Kim’s shoulder and takes him over.

It all amounts to an amazing climax where the various parties head to a showdown at a pre-destined site. There’s a much more complicated plot than you get in any other possession film about the professor cultivating a group of people who were marked because they had avoided deaths – shades of the Final Destination series – and Lee Sung-min setting up an elaborate trap in the forest involving strings of written prayers and him ritually chained to a tree – only for things to go wrong in a number of twists.

The film was a directorial debut for Kim Tae-hynng.