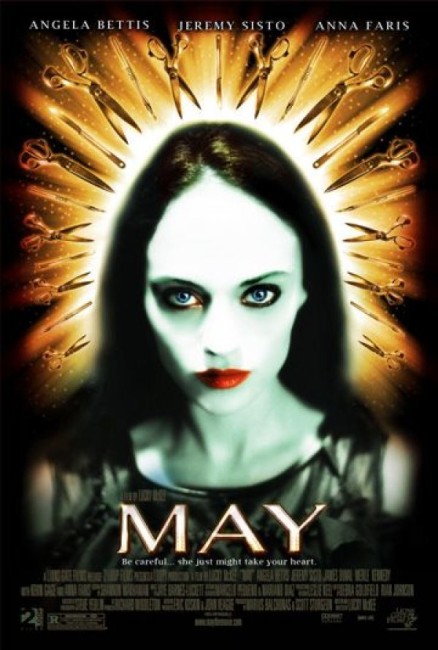 The very strange May works as a veterinary assistant. She is extremely shy and claims her best friend is Suzie, a doll that she was given as a child but never takes from its glass case. May befriends Adam, a guy she passes in the streets and keeps encountering. The two go out but he eventually finds her too weird and leaves. May next allows her lesbian co-worker Polly to seduce her but is hurt when she finds Polly with another woman. She becomes increasingly more upset. After a group of blind children at the school where she volunteers break open Suzie’s glass case, May snaps.

May is an exceedingly strange, almost unclassifiable indie film. The promotional poster/videocover that comes with a girl’s face spookily underlit suggests it is Goth horror. This is something that is born out by the opening scenes as we see Angela Bettis talking to her doll in its glass case, which gives the impression that May is going to turn out something like Child’s Play (1988) with a doll come to life.

However, such proves not to be the case after all and as the film opens proper, it turns into something quite different. It instead becomes a weird love and rejection story as we follow the amazingly withdrawn Angela Bettis as she engages in a romance with Jeremy Sisto and then has a girl-girl fling with co-worker Anna Faris, only to find herself painfully rejected by both.

The first of these romances is filled with some eccentrically lovely images – of Angela Bettis caressing her face against the upraised hand of a sleeping Jeremy Sisto in a cafe; the charming scenes as the two first talk at a laundrette. There are some peculiar bits littered around the edges of the film – the guy in the veterinary clinic going on about his dog’s missing leg, and especially Anna Faris, who manages to turn everything she does into a seduction – cutting her finger with a scalpel and relishing the pain; asking “Do you want to watch me file?”; and dancing on a table and bringing her face up to Bettis, “Do you like pussy … cats?”

When it comes, Angela Bettis’s rejection, even though eccentrically delivered, manages to feel painfully heartfelt. Your heart goes out to her during the scene where she stands outside Jeremy Sisto’s front door and hears him inside talking about his weirdo ex, and you can feel the amount of pain that she does during the scene where she stands in the shower and he rebuffs her on the phone. It is equally the case during her visit to Anna Faris’s place where she realises that Faris has another woman with her (peculiarly represented by only a pair of legs dangling into the frame from behind Faris as she and Angela Bettis talk at the door).

It is in the latter third that May eventually spills over into being an outright horror film. There are certainly a number of horror film references throughout – director/writer Lucky McKee is clearly a Dario Argento fan, placing posters for Tenebrae (1982) on Jeremy Sisto’s apartment wall and having him express amazement that Angela Bettis has never seen Trauma (1993). Later Jeremy Sisto shows Angela Bettis his student film, a rather funny parody that starts out as a perfectly straight-faced romance and then has the couple devouring one another’s fingers and splattering gore.

The horror scenes are both bizarre and upsetting – there is a weirdly horrible scene where Angela Bettis takes her doll to the blind school where she volunteers and the children insist on opening it from its glass cage despite her protestations but drop it, ending with them crawling around on the broken glass. The scenes when Angela Bettis does eventually start killing have a funny, blackly comic edge. The self-mutilation scene that climaxes the film is horrible, even if the final twist coda that the film goes out on is predictable.

In the title role, Angela Bettis gives an intensely introverted, yet also highly appealing performance, and is clearly an actress with much potential ahead of her. (Indeed, the Online Film Critics Association gave her a surprise nomination for Best Actress for the role in their 2004 awards). Jeremy Sisto, an actor one predicts we are going to be hearing major things from soon, plays with enormous natural charisma. Anna Faris, best known for Scary Movie (2000) and sequels, will probably never convince the world that she is a great actress, but this is about the nearest she has ever given to a standout performance.

May was the solo directorial debut of Lucky McKee who had previously co-directed the slasher film All Cheerleaders Die (2001). McKee subsequently went onto direct the horror films The Woods (2006), Red (2008) where a man seeks revenge for the murder of his dog, the harrowing The Woman (2011) and the remake of All Cheerleaders Die (2013), as well as the Ding Dong episode of Tales of Halloween (2015). McKee has also produced The Man Who Killed Hitler and Then The Bigfoot (2018)..

(Nominee for Best Actress (Angela Bettis) at this site’s Best of 2002 Awards).