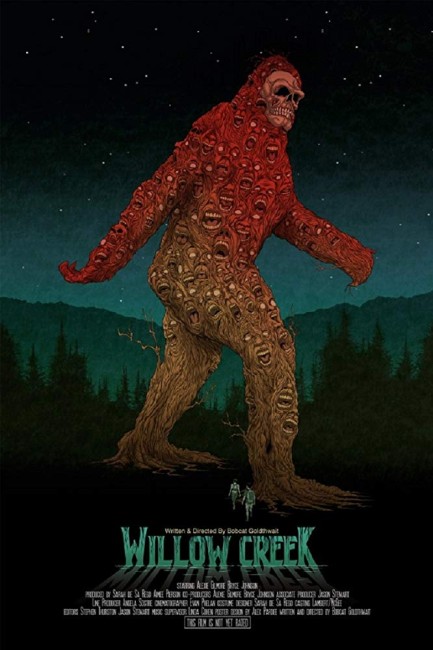 Jim Kessel and his girlfriend Kelly Monteleone depart on a camping trip into the backwoods near Trinity National Forest. Jim is a believer in the existence of Bigfoot and wants to make a documentary as they follow the trail of the Patterson-Gimlin expedition that shot the famous fragment of Bigfoot film in 1967. Kelly does not believe but goes along for his sake. After visiting the nearby town, which has become a tourist attraction centred around Bigfoot, they head into the woods, seeking the trail. As they settle into their tent for the night, they then discover that something is prowling in the woods.

Bobcat Goldthwait has a reputation as a stand-up comedian going back to the 1980s. I remember him from various film appearances of the period such as Police Academy (1984) and sequels, Burglar (1987), Scrooged (1988) and, in particular, as the lead in the excruciating Hot to Trot (1988). From his screen performances, the impression you get of Goldthwait is of an escaped psychiatric patient who hasn’t taken his meds for several months. (In person at his appearance at the Vancouver International Film Festival, Goldthwait proves to be the exact opposite – wry, ironic and wittily self-reflexive). Less well known is Goldthwait’s emergence as a director beginning with Shakes the Clown (1991) and especially in recent years with films such as Stay (2006), World’s Greatest Dad (2009) and God Bless America (2011), which are all known for their biting black comedy.

Goldthwait confesses that he has had a long time fascination with the Bigfoot legend – he has even attended several of the conventions – and that this is what fuelled Willow Creek. The film is essentially a Found Footage treatment of the Bigfoot story. The fascination with Bigfoot has been the subject of an extraordinary number of films before, particularly cheap ones made for drive-in audiences during the 1970s such as Bigfoot (1971), The Curse of Bigfoot (1972), Shriek of the Mutilated (1974), The Legend of Bigfoot (1975), Creature from Black Lake (1976), In Search of Bigfoot (1976), Sasquatch (1976) and The Capture of Bigfoot (1977) among many others, and still continues today mostly in the B horror movie field. The Found Footage approach to Bigfoot is not a new one either and has been conducted in a number of films with the likes of The Sasquatch Hunters (1997), Hair of the Sasquatch (2008), No Burgers for Bigfoot (2008), Sawtooth (2009), Exists (2014) and The Bigfoot Project (2017).

With Willow Creek, we are introduced to a couple (Bryce Johnson and Alexie Gilmore) who are a Mulder and Scully of sorts – ie. he is a passionate believer in the weird, she a sceptic – who are setting out into the woods with camcorder to follow the path of the real-life Patterson-Gimlin expedition (the one that shot the famous 53-second long piece of film that supposedly shows a Bigfoot). Goldthwait spends the first half-hour of the film charting the tourist phenomenon that has grown up around Willow Creek – a Bigfoot museum and bookstore, a Bigfoot-themed restaurant that sells giant foot-shaped burgers, statues everywhere, even a mural showing Bigfeet helping humanity. The surprise about these scenes, as Goldthwait freely admits in his Q&A, is that most of the interviewees (with the exception of a couple of them) are real people and that their scenes were shot as actual interviews, not as staged scenes with actors. This gives Willow Creek a strange feel that sits halfway between documentary and fiction – the couple and their relationship is being enacted by two actors but the surroundings and the people that inhabit the town are authentic.

Once the film gets into the woods, it becomes something very different. Once Goldthwait gets Bryce Johnson and Alexie Gilmore into the tent, he starts to do some remarkable things. There is a scene where he proposes to her that manages to take the audience through some remarkably nuanced emotions, despite essentially being a scene where the two actors are improvising while sitting in the woods by torchlight.

The most tense and effective scene in the film is the nineteen minute long single take where the two huddle in the tent and hear sounds of something outside that appears to be getting closer and becoming more threatening. We never see anything outside the tent – indeed, we never see any actual Bigfoot throughout the entire film – only hear the sounds but the fearful reaction of the two actors manages to keep the audience on edge and jumping out of their seats every time there is a noise. This of course does lead to inevitable comparisons to The Blair Witch Project (1999), which becomes obvious in the subsequent scenes where the couple start getting lost in the woods and find they are retracing their steps and her increasing panic.

I was impressed with Willow Creek. It was certainly nothing that I was expecting from Bobcat Goldthwait based on his other films or work as a stand-up comic and actor. The program notes gave the impression that the film was a comedy and the audience that came into the Vancouver International Film Festival screening seemed to think that this is what they were in for but it is never the case. The audience initially laughs at some of the peculiarities of the townspeople, expecting these are prelude to the film getting weirder and wackier, yet Bobcat Goldthwait has surprising sympathy for them (as he stated, he was determined not to make these scenes into a freakshow). And by the time he has the two actors in the tent, all evidence that we are watching a comedy has dissipated – and with, what one must say, are undeniably effective results.