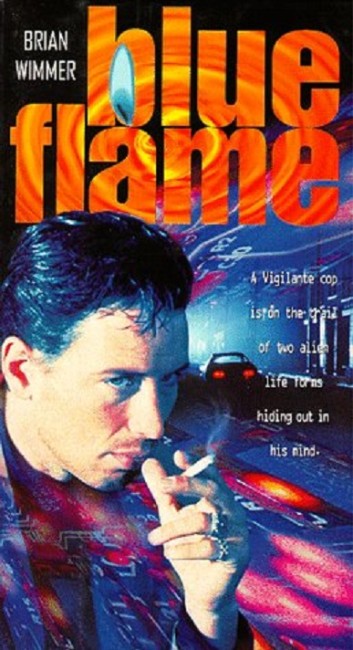 It is the year 2018. Peter Flemming is an operative for ACTCON, an agency set-up to deal with potential alien visitors. Flemming’s daughter Samantha is then abducted. The two aliens responsible, a man and a woman known as Fire and Rain, are captured. Flemming wants to kill them but the agency instead places them in frozen stasis. Four years later, Fire and Rain break out of captivity using their mental powers. Flemming is brought in to track down and eliminate them. The trail takes Flemming through the criminal underworld but he is captured by Fire and Rain. They subject him to a series of psychological tortures, entering his mind and moving through various locations in his memory, all with the intention of killing him. In the dream simulations, which exist in an alternate time cycle that was created by Fire and Rain while they were in stasis, Flemming discovers an ally and learns how he can fight back.

Blue Flame is a rare find – a film that never appears to have had a dvd release. And seen, it is a real oddity. At first glance, it appears to be a routine B-budget action film with science-fiction overlaps but this soon transforms into a mind-boggling conflation that is altogether different to what one expected from the way the film was promoted. Indeed, Blue Flame gives all the appearance of distributors having promoted it as an action film for lack of any other idea what genre niche to sell it under, whereas it is instead a conceptually challenging science-fiction film.

The film offers up a rundown future setting – we are supposedly in the 2020s but the cars, weapons and computers on display are all contemporary mid-90s. The opening scenes suggest a cheap science-fiction film that has let its pretentions get the better of it – the credits, for instance, take place against the images of a girl seductively dancing against projected lights and screens in a room where the floor is flooded in three inches of water. The idea of an alien menace where the male alien (Jad Mager) has been cast as a badly overacting pretty boy in designer clothing and shades proves somewhat hard to swallow. And there are some rather pretentious lines of dialogue: “Where’re we going?” “A place you’ve never been before. And a place where you’ll never return.”

The script throws in a series of revelations that plunge everything into the decidedly offbeat. [PLOT SPOILERS]. Brian Wimmer passes through his investigation where he keeps stripper Melissa Behr a prisoner handcuffed to him, only for her to suddenly turn and inject him in the neck with a syringe that is built into her arm and reveal that she is a cyogen android – but also, we later learn, one who has discovered feelings for him.

Once Brian Wimmer is captured by the aliens, the surprises start to become even more way out. We learn that we are now in an alternate dimension/timeline that was created by the Potentials while they were imprisoned in cryo-sleep. Next comes the revelation that the alien woman Rain (Kerri Green) is in fact Brian Wimmer’s daughter all grown up in the alternate timeline (although the script never explains how she managed to age fifteen years when she only spent four in cryo-sleep, nor for that matter how she as a grown woman could abduct her child self).

The film reaches a point of positive ingenuity as it starts ducking in and around people’s dreamed memories and waiting for others to go to sleep so that they can trap them there. The result comes out as something that prefigures The Matrix (1999) by way of A Nightmare on Elm Street (1984). By the last third of the film, the plot starts to zing with a conceptual dexterity – one where, despite the impoverishment of the budget, the filmmakers succeed in creating a world that runs according to their own rules and then putting a number of spins on it.

The main problem that Blue Flame has is that it has been made on a severely impoverished budget. The dreamworld nether regions are represented by what looks like a warehouse where the walls have been covered by newspaper and black polyurethane plastic bags, while the gateway between worlds is merely a graffiti-covered culvert. (At one point, the location of an industrial plant is ingeniously explained away as a leftover site in the alternate world from when Jad Mager was exploring alternate fuels). The cheapness does tend to drag down what is otherwise a challenging and ingenious story. Had Blue Flame been made with a better budget, it could well have had the makings of a minor science-fiction classic.