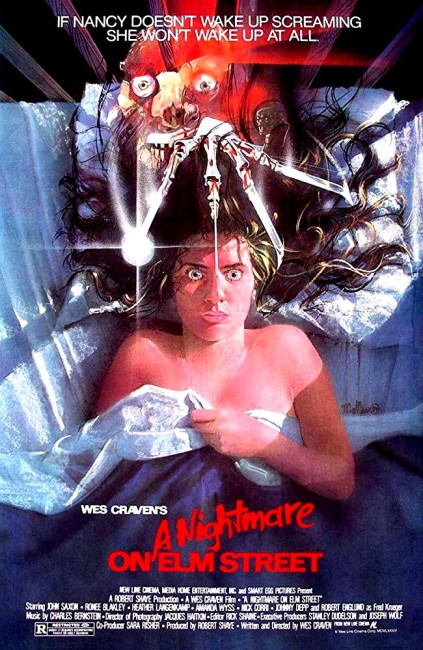 Teenager Nancy Thompson finds that she and a group of friends are all experiencing identical nightmares wherein they are pursued by a burn-scarred figure in a hat who wields a razor-tipped glove. However, when the figure starts to mutilate them in their nightmares, the group wake up to find cuts and burns on their skin in reality too. Next, Nancy’s friend Tina is killed in the waking world after she is savagely dismembered by the figure in her dreams. Haunted by the same figure, Nancy discovers that he is Fred Krueger, a child molester that their parents dragged away and burned alive after he was acquitted on a technicality. Krueger has now returned to exact revenge on their children. Nancy desperately tries to stay awake and find a means of combating Krueger.

The success that transformed a pizza-faced child molester into the cult anti-hero of the 1980s is a wild unlikelihood that could surely only have happened in the horror genre. A Nightmare on Elm Street may well have been the single most influential horror film of the 1980s. The film spun off a series of sequels – seven at current count (see below) and created a unique new boogie man in the character of Freddy Krueger, who appeared on T-shirts, lunchboxes, model kits, even became a poster pin-up figure. Furthermore, A Nightmare on Elm Street inspired a new genre of horror films that rested in a blurred dividing line between dream and reality and/or featured a boogie man returned from the grave to slice people up.

Nightmare on Elm Street also made Robert Englund, surely the horror genre’s equivalent of Billy Idol and one of its worst actors, into a cult star. It also transformed the career of Wes Craven, then a director who had made a couple of strong ultra-violent indie horror films – The Last House on the Left (1972) and The Hills Have Eyes (1977) – and was searching around for a break into the mainstream, into a major name in horror. And the spawning of the A Nightmare on Elm Street films into a franchise gave New Line Cinema the financial clout to move from a minor studio into a major frontline player throughout the next decade.

Wes Craven’s films all resonate with a sense of the tenuousness of reality and the importance of dreams. The Last House on the Left, Deadly Blessing (1981) and Deadly Friend (1986) all have striking dream sequences. Subsequent Craven films such as The Serpent and the Rainbow (1988) and Shocker (1989) feature villains who inhabit dreams and places of the imagination more so than the real world, while The People Under the Stairs (1991) features a couple who have transformed an ordinary house into a kind of rubber reality that pops up with trapdoors and slides when least unexpected. Wes Craven films of the 1990s such as Wes Craven’s New Nightmare (1994) and Scream (1996) and sequels became preoccupied with meta-fiction – they are films where the dividing line between movie fiction and the audience watching the film is constantly being broken down and blurred.

Wes Craven’s oneirological horrors and the blurrings of reality and imagination receive their most striking and most undiluted airing in A Nightmare on Elm Street. Although at the time, rather than any grandly metaphysical grappling with the nature of dream and reality, Craven was only drawing upon the 1980s bogey man figure that had been popularised through the success of Halloween (1978) and Friday the 13th (1980) and numerous sequels and imitations of either. Yet, for all that, Craven encountered a surprising number of problems in trying to find financing for A Nightmare on Elm Street, with it being rejected by all the major studios. The film was eventually made on only a surprisingly low $1.8 million budget where it was construed as no more than another variant on Halloween.

The A Nightmare on Elm Street sequels diluted the character of Freddy Krueger until he was no more than a badass Wile E. Coyote figure popping up and dispatching teenage victims with campy one-liners. The sequels seem less directed than they are stage-managed by the effects and makeup people. A Nightmare on Elm Street by contrast maintains Freddy Krueger as an effectively threatening presence, largely by keeping him almost entirely silent throughout. There is almost nothing in the way of novelty effects set-pieces here and those that do turn up tend to be rather cheesy in comparison to those in the sequels.

Despite this, A Nightmare on Elm Street is a dozen times more effective than almost all of Elm Streets II through VI placed together. Wes Craven evinces a genuine wildness to the visions he unleashes – the shadowy figure of Krueger pursuing victims with huge extended six-foot long clawed arms; a then unknown Johnny Depp being sucked down into his bed, along with his stereo and tv, and spat out in a gusher of blood that sprays against the ceiling; the wall above Heather Langenkamp’s head bulging out with a pair of hands as she sleeps; or the outrageous image of the clawed hand surfacing between her legs as she doses off in the bath and then trying to drag her down into a gaping black hole; and especially the dispatch of Amanda Wyss, slashed to bloody pieces while being dragged around the walls and roof of her bedroom.

Yet for all that, and considering the reputation that A Nightmare on Elm Street holds, it also has an unhoned crudeness at times. The dialogue and characters never rise much above being the random victims of the average Friday the 13th film. Heather Langenkamp gives a vain and snooty performance that is a major factor in working against the film’s sympathy. Craven also demonstrates the irritating willingness to throw away the self-created rules of the game he has set up for the purpose of a twist ending that reveals the nightmare isn’t over (although he did later insist that the ending was not his but was forced on him by the studio). Nevertheless, in Wes Craven’s genuinely unworldly visions, the film has a haunting effectiveness.

A Nightmare on Elm Street makes an interesting comparison with Dreamscape (1984), released only a few months before this, which played the same idea with a science-fiction angle but to far more banal ends. Two other interesting progenitors are Don Coscarelli’s Phantasm/The Never Dead (1979), a film that exists in a confidently surreal blurring line between dream and reality, and the little seen The Sender (1982) about a psychic psychiatric patient who has the ability to insert himself into people’s dreams.