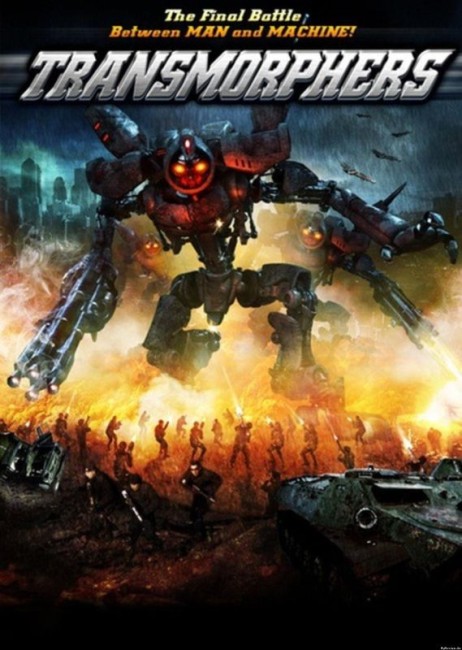 Earth has been invaded by giant alien robots. The remnants of humanity gather in an underground city. They believe they have finally found a means of defeating the Z-Bots, as they are called, which involves capturing one of them and jacking into their system to shut the entire army down. The first team sent out to capture one of the robots is eliminated. General Van Ryberg then takes the radical step of thawing out Warren Mitchell, a tough soldier who was sentenced to a hundred years cryo-sleep for being a radical. Mitchell immediately sets out in his own individualistic way and recruits a team of volunteers to go topside. However, as the mission starts to run into problems, their actions end up alerting the Z-Bots as to the whereabouts of the underground city.

The Asylum is a low-budget production company who coined the term ‘mockbuster’ to describe their output. Beginning when Steven Spielberg announced his version of War of the Worlds (2005), they opportunistically leapt on the fact that the H.G. Wells novel was in public domain to serve up their own low-budget copy War of the Worlds (2005) and released it to videostores one day before Spielberg’s film hit theatres. They have been responsible for a great many low-budget films with copycat titles designed to ride on the success of popular hits. These include the likes of The Da Vinci Treasure (2006), Snakes on a Train (2006), AVH: Alien vs Hunter (2007), I Am Omega (2007), Allan Quatermain and the Temple of Skulls (2008), The Day the Earth Stopped (2008), 100 Million BC (2008), Sunday School Musical (2008), The 18 Year Old Virgin (2009), Almighty Thor (2011), Battle of Los Angeles (2011), Age of the Hobbits (2012) and Atlantic Rim (2013), among others.

Transmorphers was The Asylum’s answer to Michael Bay’s Transformers (2007). The film was released to dvd one week before the Bay film appeared in US theatres. Bay incarnated the 1980s tv series in live-action, taking the anthropomorphised robots we saw there and reconstructing them as massive juggernauts engaged in a hurtling orgy of mass destruction. Bay had a reported $147 million budget at his disposal. By comparison, Leigh Scott and The Asylum are stuck with attempting to replicate this on a reported budget of only $250,000. What they serve up resembles more of an alien invasion tale where the anthropomorphised Transformers are replaced by some cheaply rendered medium-sized killer robots and humanity is fighting a desperate rearguard defence. It feels less a Transformers film than one of the B-budgeted 1990s copies of The Terminator (1984).

The Asylum’s films tend to get some very bad reviews almost as a matter of course because they have been labelled as cheap ripoffs. As of this writing, Transmorphers, for example, sits with a 1.7 rating out of 10 on the IMDB, a very low ranking that should leave it in consideration for their Bottom 100 Films. That said, the more you delve into categorically working your way through The Asylum’s catalogue, as this author has done, as opposed to randomly sampling one or two items here and there, some subtle differences become apparent.

The surprise when watching Transmorphers is that it defies expectation, at least in terms of comparison to other Asylum films, and becomes a halfway watchable effort. The tensions between the soldiers and the scenes prepping for the military excursion to the surface have an effective tightness that works well – certainly the characters here seem far more like ordinary people with complex interactions than do any of the actors in Transformers and any of its sequels. In particular, it is often the women of the show who hold things up – they may not be the most talented actresses in the world but seem to be putting everything into the fierceness of their interactions – credit going out in particular to Shaley Scott and Eliza Swenson.

That said, the terse effectiveness of the character interactions gets killed the moment we go topside and all of this is unwound by the painful cheapness of the visual effects representing the robots in action. To its credit, the film keeps the reliance on effects scenes relatively limited and focuses more on the characters. The hero gets a highly improbable mid-film twist revelation [PLOT SPOILERS] – that he has been an android all along without realising it (surely something you might think he would work out the first time he is cut). The climactic scenes building up to the big fight at least push on determinedly in the face of the inadequate effects and the film rises to the level of at least one of the more vigorously cheap Star Wars (1977) clones of the 1980s.

The Asylum made their own prequel with Transmorphers: Fall of Man (2009), which was released at the same time as Michael Bay made his sequel Transformers: Revenge of the Fallen (2009).