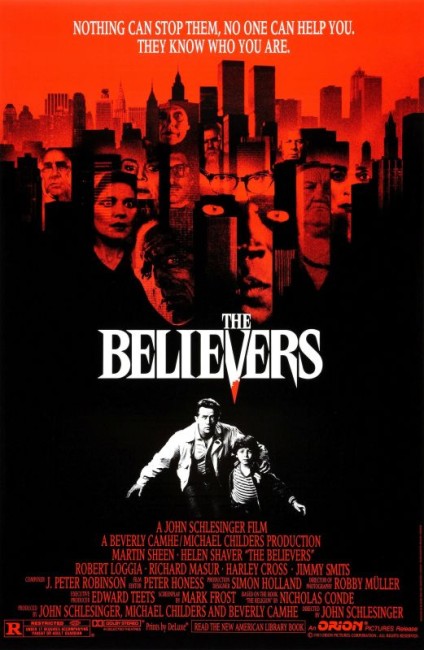 New York police psychologist Cal Jamison is called in to examine Joe Lopez, a Latino officer who is in a state of hysteria. Lopez is frenetic, believing himself the recipient of a Santeria curse. Cal subsequently becomes fascinated with Santeria – a Latin American religion that is a blend of voodoo and Catholicism. Researching into the religion, Cal uncovers the involvement of a local millionaire philanthropist. However, Cal’s prying makes him a target of the cultists and his girlfriend is infected with a boil that takes up the whole side of her face while his son is earmarked as a human sacrifice.

The Believers was part of a mini-spate of films that all came out around the space of one year dealing with voodoo. Others included Angel Heart (1987) and The Serpent and the Rainbow (1988). All of these took up dealing with voodoo and approached the subject with ostensible seriousness rather than the B budget arena it had usually been relegated to that point.

Moreover, The Believers was given an air of respectability in that it was directed by John Schlesinger, previously responsible for such mainstream fare as Billy Liar (1962), Far from the Madding Crowd (1967), Midnight Cowboy (1969), for which he won Academy Award as Best Director, Day of the Locust (1975) and Marathon Man (1976), as well as one further venture into genre material with the psycho tenant film Pacific Heights (1990).

The Believers was going to be, one could feel as they sat down to watch, one of those films that assiduously avoids the horror label. Ironically, the film was not seen that way and was unjustly slammed by many mainstream reviewers when it came out because a respectable director – John Schlesinger – was seen as entering a genre (horror) that he should normally regard as beneath him. Schlesinger seems to be caught walking a delicate tightrope between trying to do his material earnest justice as a serious study, while at the same time making a dramatically interesting film.

Whatever its pretensions in regard to being a serious film, The Believers works effectively as a horror film. Schlesinger has a cinematographer’s eye for compositions and the Santeria religion is evoked in a shining and eerie beauty – its iconography seems to sinisterly loom with ever-present regard in the foreground of the frame. Schlesinger uses the full extent of the Dolby sterero soundtrack, creating a surround-sound wall of menacing, almost subliminal hisses and burps. Martin Sheen and Jimmy Smits give respectably intent performances. As the chief zombie, Malick Bowen looks quite unwordly with his craggy, gnarled face and opalescent white eyes.

The film’s greatest problem is in an attitude so earnest that it has no room for the subtleties of an ending that relies upon classical horror dramatics. Furthermore, in transforming a real-life religion into grist for a horror film, The Believers didn’t make too many friends among actual Santeria practitioners who, understandably, did not exactly appreciate being portrayed as sinister cultists.