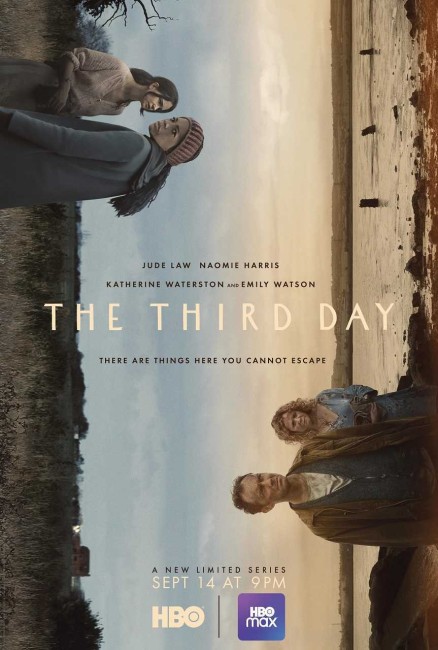 Sam has travelled into the countryside to visit the spot where his son died. He then sees a teenage girl hang herself in the nearby woods. He rushes to her rescue and saves her and then insists on driving the girl Epona home. This turns out to be the island of Osea, which can only be reached by a causeway that is opened by the tide at certain hours of the day. Sam is concerned for Epona and believes she may be being abused and that the Osea locals are covering things up. He urgently needs to get back to the mainland for a business deal but is stuck on Osea as the tide comes in. The only room available at the inn requires sharing a bed with Jess, an American anthropologist come to study the island’s religious rituals. The two of them wake in the morning to find they drunkenly slept together. Sam becomes caught up in the island’s religious rituals and finds they connect to the death of his son. Some time later, Helen and her two daughters Ellie and Talulah travel to the island supposedly for Ellie’s birthday. They too become caught up in the mystery and the secrets the locals are keeping.

Although it was not an initial success, The Wicker Man (1973) has since become regarded as a classic horror film. It set down the themes of Folk Horror, of tiny corners of Celtic ritual involving Earth and nature worship and the necessity of human sacrifice to ensure harvest crops. It was badly remade as The Wicker Man (2006) and given an unnecessary sequel with The Wicker Tree (2011). Its influence can be seen in a number of other films like Cherry Tree (2015), The Ritual (2017), Apostle (2018), Midsommar (2019) and Death of Me (2020). (For more detail on the genre see Folk Horror Films).

The Third Day is an HBO mini-series in six episodes made as a co-production between US and UK, including the companies of Brad Pitt (Plan B) and Ridley Scott (Scott Free). The mini-series is another variant on the Folk Horror story. It tells two different story strands, the first following a man (Jude Law) and the second a woman (Naomi Harris) and her two children as they each travel to the island and become involved in its mystery. In between the two stories – the third and fourth episodes – there was also a 12-hour long livestream episode, although I have not been able to find a copy of this to view.

The Third Day comes principally from the pen of Dennis Kelly, creator of the cult tv series Utopia (2013-4) – the original British version, not the US bastardisation. The two stories are split between two directors. Jude Law’s story, the first three episodes, are directed by Marc Munden who did a number of episodes of Utopia and other British mini-series like Vanity Fair (1998), The Devil’s Whore (2008) and National Treasure (2016), as well as the occasional film, most recently a remake of The Secret Garden (2020). The other three episodes are directed by Philippa Lowthorpe, also a British tv director with shows like Call the Midwife (2012- ), Jamaica Inn (2014) and the film Misbehaviour (2020).

Dennis Kelly borrows much of the basics from The Wicker Man – man is brought to an island out of concern for a young girl; the realisation that islanders are keeping secrets from him and deliberately obfuscating his search; the discovery of druidic folk religion alive on the island; he eventually finding that he has been lured to the island with intent by the villagers. Kelly seems so enamoured of the plot basics that he repeats most of these in the second story with Naomie Harris with slight variation.

The set-up is familiar but holds interest – the island with the snaking causeway; the locals and their evasiveness and outright lies; the mystery of what is happening with the girl Epona; the constant efforts to prevent Jude Law from returning to the mainland; his urgency of getting back to the business deal (and then the kicker of the twist at the end of Episode 1 where Jude brings the bag of stolen money out of the car).

The longer running time gives much more opportunity for the series to explore and give depth to the characters, especially when it starts to tie Jude Law’s backstory into the show and reveal his purpose in coming there, which the series does so with a complex fascination. That said, it does feel overlong. Jude’s story comes together and ends quite well at the end of Episode 3 where it would be a natural end point if this were a feature film. The second three episodes certainly add more but feel as though they are extruding the story beyond its natural length. It is also never clear exactly what the title refers to as no third day is ever referred to or mentioned as having any significance throughout.

It is somewhat confusing why the story jumps tracks after the first three episodes and seems to go through a similar repeat of the scenario with different characters but the same island locals in the background. Certainly, this cleverly ties up in the twist that comes at the very end of the first episode and is woven in and out of the other story after that point. Naomi Harris gives a fine performance and is considerably aided by young Nico Parker, the daughter of Thandie Newton, who had previously appeared in Tim Burton’s Dumbo (2019) and clearly has a future ahead of her.

It is a beautifully photographed series, particularly Benjamin Kracun’s work in the first three episodes (the second three episodes adopt a plainer look). Marc Munden shoots his episodes with a cinematic grandeur, shots pulling back to show the length of the causeway and especially during the second episode where Jude Law takes hallucinogens and sees casually surreal sights around him – trees and foliage coming to life and lit up in colours, partygoers floating up through the air.