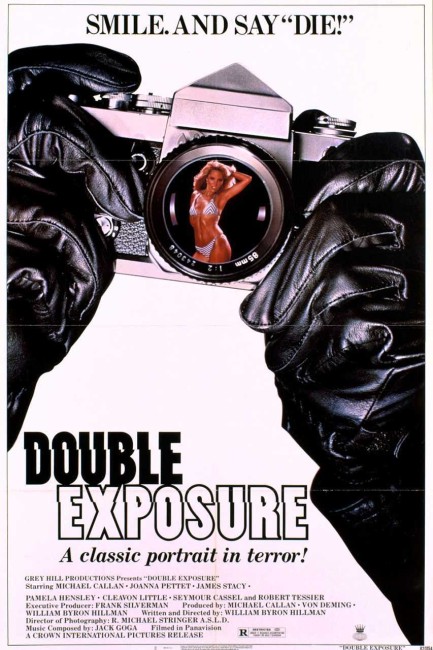 Los Angeles is being terrorised by a serial killer. Photographer Adrian Wilde begins to have a series of dreams in which he sees himself killing some of his models. Afterwards the police start finding the models murdered just the way he dreamed, which makes Adrian the primary suspect.

This cheap and nasty exploitation thriller follows exactly where Eyes of Laura Mars (1978) went three years before. Laura Mars was hardly a film that inspired any major box-office ripples, let alone one imagining anybody would want to copy it. In fact, Double Exposure is potentially a much more interesting film than Laura Mars was.

While Laura Mars was a B movie killed by A-budget self-importance, Double Exposure remains firmly in the B-budget arena and does not disguise the sado-sexual elements that Laura Mars raised but let slip through its hands. Where Laura Mars lumbered like an elephant, Double Exposure at least throws in a series of occasionally inventive killings – one dream killing shot underwater in a swimming pool with Michael Callan approaching the victim with glowing eyes seems incredibly strange.

Mostly though, Double Exposure is laughable – one killing where a model’s head is placed in a trash bag with a snake is amazingly daft. Michael Callan’s sweaty, phoney overacted performance, centred around a series of befuddingly edited conversations conducted with himself in a mirror, goes way beyond silliness. Pamela Hensley plays a tough and aggressive cop and is awful, not for one moment exuding the slightest conviction in the part.

The twist ending revealing the killer’s identity is predictable, although is raised by some okay acting on the part of the individual revealed, even if it fails to offer any insight into the character’s motivation. Like Laura Mars, the script also lets explanation for the psychic link between the hero and killer slip away unexplained. The film’s time period is uncertain – while it has a 1981 copyright date, it was clearly made several years earlier. The clothing is stolidly 1970s and there is a tedious disco score.

Director William Byron Hillman and star Michael Callan had previously also made the very similar The Photographer (1974) about a photographer killing his models. Hillman made a handful of other films, his only other genre entry being the children’s film Quigley (2003) about a man returned from the afterlife as a dog.