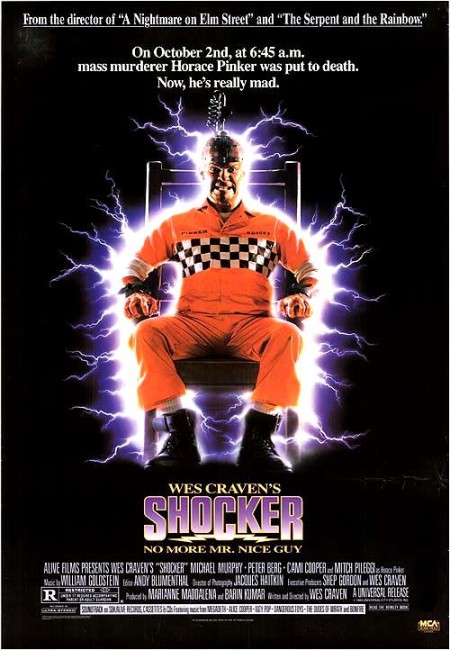 High school quarterback Jonathan Parker is knocked out after running into the goal post during a game. While unconscious, Jonathan has a vision in which he sees his mother and sister murdered by a serial killer. He comes around and moments later receives a phone call from his police lieutenant father, informing him that his mother and sister have been butchered just as he saw in his vision. Jonathan is able to use his psychic link to lead the police to the killer, tv repairman Horace Pinker. Pinker is sent to the electric chair but this only serves to transform him into a being of electricity. Jonathan realizes that Pinker is able to pass through electrical appliances and possess people. Jumping between host bodies, Pinker comes after Jonathan seeking revenge.

Wes Craven was a director to be reckoned with. At the time that Shocker was made, Craven had appeared with two of the strongest entries in the 1970s Backwoods Brutality cycle – The Last House on the Left (1972) and The Hills Have Eyes (1977). Although the work that Wes Craven was most associated with in 1989 was A Nightmare on Elm Street (1984), which became the most influential horror film of the late 1980s. Craven signed the rights to A Nightmare on Elm Street away to New Line Cinema who went on to turn it into a huge money-spinning franchise, in so doing transforming Craven’s original creation into something campy and non-serious.

Shocker was clearly an attempt upon Wes Craven’s part to create a successor to A Nightmare on Elm Street, if not a film that would spin off its own franchise. Arriving initially subtitled No More Mr Nice Guy, accompanied by a head-banging heavy metal soundtrack and with tongue fiendishly planted in cheek, Craven seemed to be offering a no holds barred, blow-to-the-stomach horror film, designed to kick Freddy Krueger’s ass for good.

In a pig’s eye! The 1980s were also a period that was decidedly uneven for Wes Craven – for every dazzling work like A Nightmare on Elm Street or the hugely underrated The Serpent and the Rainbow (1988), Craven also turned out duds like Swamp Thing (1982), The Hills Have Eyes Part II (1985) and Deadly Friend (1986). Instead of a kickass film that dropped Freddy’s posturing ass to the mat, what we instead have with Shocker is a film that embodies all the worst excesses of Wes Craven. Once again, Craven is stuck in dream/reality territory and this time only getting sillier by degrees. He never for a moment seems able to settle onto a single idea, whipping the film off on a trail of concepts left over from Elm Street, the recent body-hopping hit The Hidden (1987) and the old B-movie Man Made Monster (1941) about an electrically charged killer staggering up from the electric chair.

Shocker changes tone at a moment’s notice and without a thread of consistency. Despite brief mentions of black magic and a strange ritual involving Mitch Pileggi praying before a tv, there is no explanation of Pinker’s powers. Nor for that matter is there any explanation of Peter Berg’s clairvoyant/psychic link or why the pendant that Berg gives girlfriend Cami Cooper for her birthday should have an effect on Pinker akin to that of a crucifix on a vampire. Not to forget how out of nowhere at the climax Peter Berg suddenly demonstrates the ability to jump inside the world of a tv like Pinker can.

Scenes with Peter Berg being attacked by a Lay-Z-Boy chair with eyes, or pursued by ghostly ex-girlfriend Cami Cooper doing phantom dog paddles through a lake and particularly the scenes with Mitch Pileggi possessing various people while pursuing Berg through a park are more ludicrous than scary. Mitch Pileggi gets to quip groan-worthy Freddy Krueger-type one-liners – at one point commenting: “It’s finger-lickin’ good” while biting off a prison guard’s finger.

By the extended climax where Mitch Pileggi and Peter Berg pursue each other into a tv set, passing through war footage (where Pileggi transforms into a bomber); tv evangelist parodies (with the evangelist played by no less than LSD guru Timothy Leary); onto the desk of a newscaster; out into a living room where an overweight lady proclaims “This lends a new definition to the meaning of audience participation;” before Berg finally manages to freeze-frame Pileggi and then batters him around the walls of a room by waving the remote control about, before simply turning the tv set off, the film’s increasing redefinition of the term over-the-top leaves it somewhere up in orbit.

Clearly in the expectation that Shocker would be a major hit and inspire a new horror franchise, a number of other films around the same time quickly jumped on the theme of executed killers returning from the electric chair with the likes of Prison (1987), The Chair (1989), The Horror Show/House 3: You’re Better Off on Elm Street (1989) and The First Power (1990), while the theme was also taken up by the later likes of the action film Judge and Jury (1996), the surprisingly good Fallen (1998) and Uwe Boll’s Seed (2007). The theme of the executed prisoner returning to exact vengeance was first conducted in The Walking Dead (1936).

Shocker is also worth seeing for the number of up-and-coming names in the cast. As the footballer hero, there is a relatively unknown Peter Berg who subsequently gained attention as a regular on tv’s Chicago Hope (1994-2000) and later became a director with films like Very Bad Things (1998), Friday Night Lights (2004), The Kingdom (2007), Hancock (2008), Battleship (2012), Lone Survivor (2013), Deepwater Horizon (2016) and Patriot’s Day (2017), which are of an increasingly pro-militaristic bent and/or ardently flag-waving patriotism.

Mitch Pileggi later gained a name as Assistant Director Walter Skinner on tv’s The X Files (1993-2002, 2016-8), a role where he played with a cool, emotional control at almost complete 180 degree remove from the roaring OTT Horace Pinker here, much to the amusement of X Files fans. There are minor cameos from A Nightmare on Elm Street heroine Heather Langenkamp as a victim who is attacked at knifepoint; Ted Raimi as one of Peter Berg’s teammates; Star Trek: The Next Generation (1987-94)’s Brent Spiner as a guest on the tv talkshow; and both of Wes Craven’s children Jonathan and Jessica.