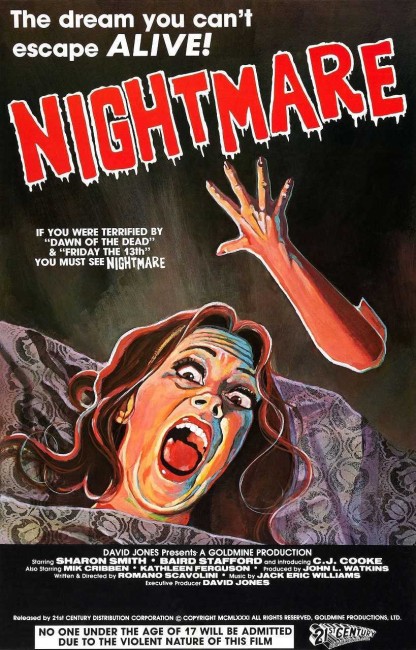 George Tatum has had a history of disturbed mental behaviour after he walked in on his father and mother having sex as a child and responded by hacking both of them up with an axe. In New York City, he has been placed on an experimental drug treatment to curb his violent dreams. He now goes AWOL from the program and heads back to his family home in Florida, killing women along the way. Susan Temper now lives in the former Tatum family home with her three children. Her eldest C.J. is getting in trouble for his pranks. However, when C.J. sees George lurking around and stalking them, nobody will believe him.

Nightmare, or to give it its more common, less anonymous retitling, Nightmare in a Damaged Brain, is a film of some notoriety. It did screen theatrically but the UK release was cut of some ten minutes of footage. When an uncut print was released to video in the UK, the distributor was ordered to pull all copies. The notoriety grew from there where it was promptly listed as a Video Nasty. There are various cut and uncut versions in circulation – if it runs any less than 97 minutes, you are watching a cut version.

The other notoriety surrounding the film is how it tried to sell itself with the claim that the makeup effects were from Tom Savini, who was then a cult figure as a result of his work on key films of the era like Dawn of the Dead (1978) and Friday the 13th (1980). When the early posters went out with Savini’s name highlighted, Savini sued and stated that he had only acted as a consultant and had not done any on-set work. All prints now credit the effects work to Edward French.

More due to its timing than anything else, Nightmares in a Damaged Brain has been lumped in with the 1980s fad for slasher films. It has undeniable adherences to the genre but in tone it sits more in the company of a 1970s psycho film like The Fiend (1971), The Love Butcher (1975) and The Driller Killer (1979) than the slasher ilk of Halloween (1978) and Friday the 13th. There is less focus on random stalking and slashing (although the film has its share of that) than there is of the killer’s disturbed mental space interwoven with cuts back to Sharon Smith and her three children. There is also a lack of teen victims and their hijinks here, which you could say is fairly much a staple of the slasher film – although there is a babysitter who gets killed.

Most of Nightmares in a Damaged Brain plays out like a typical grindhouse feature. There is some shoddy photography and editing that makes for a fairly scuzzy looking film on most regards, while you can hardly say that Romano Scavolini has anything that approaches directorial style. The film is occasionally interesting. One of the more intriguing scenes is where we see John L. Watkins’ unnamed police detective using an early computer system (one that was made pre-Windows and GUI environment too) to try and track and predict the killer’s movements (which, you suspect, given the state of computer technology at the time is something that pushes Nightmares in a Damaged Brain into the realm of science-fictional). Still this is not nearly enough of interest to stretch to a worthwhile 97 minutes, least of all through the edited-in-a-blender print we have.

The other complaint might be that the graphic violence that upset people enough to have Nightmares in a Damaged Brain listed as a Video Nasty is few and far between. There is a scene right at the start where Baird Stafford is shocked by nightmares and has hallucinations of a severed head still moving. It is only right near the end that Romano Scavolini delivers the rest of the goods and we get some fairly graphic scenes where we see the babysitter (Danny Ronan) being stabbed in the back with a hammer and the flashbacks where the killer’s mother is beheaded with an axe and the kid then hacks into his father’s chest.

Romano Scavolini was an Italian director whose other films have almost all been made in Italy. He had made thirteen films, mostly sex films or thrillers. These include the giallo Spirits of Death (1972) and Savage Hunt (1980) about a man pursued after procuring torture footage. None of these enjoy particularly high profiles.