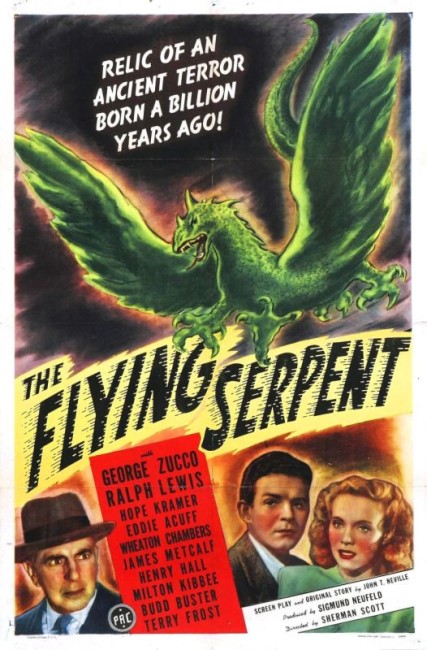 Archaeologist Professor Andrew Forbes in excavating Aztec ruins near San Juan, New Mexico. He has found a Quetzalcoatl bird that was worshipped by the Aztecs and has been keeping it caged in a secret cave hideout. Forbes is infuriated when John Lambert publishes an article about the Aztec treasures reputedly in the area as this will mean curiosity seekers will disturb his site. Forbes lures Lambert to the area and gives him one of the Quetzalcoatl’s feathers. Forbes releases the Quetzalcoatl and the feather draws it to attack and kill Lambert. Mystery author Richard Thorpe decides to host a radio broadcast in which he investigates the murder. As Thorpe and others start to get too close to his discovery, Forbes is forced to leave feathers on their person and kill them too using the released the Quetzalcoatl.

The Flying Serpent was one of the films from PRC (Producers Releasing Circle), a low-budget production company formed by Sigmund Neufeld and his brother Sam (who Anglicised his name as Sam Newfield). PRC gained a reputation as the quintessential Poverty Row studio of the era and throughout the 1940s maintained a prolific output of B movies usually in the crime, horror and Western genres. They even made several Long Ranger films.

British-born actor George Zucco became PRC’s in-house mad scientist. Zucco had appeared in supporting parts in a number of the better budgeted Universal monster movies but was snapped up by PRC for the likes of The Mad Monster (1942), The Black Raven (1943), Dead Men Walk (1943) and Fog Island (1945). Here Zucco was put through his paces once again, this time as a mad archaeologist as opposed to scientist.

The plot is an essentially a rehash of PRC’s earlier The Devil Bat (1940), one of their biggest horror successes, which had Bela Lugosi as a mad scientist who creates an aftershave that he gives to his enemies as a target for his trained killer bats to hone in on and kill. Here we have fairly much the same plot with George Zucco as an archaeologist who has trained a Quetzalcoatl bird to hone in and kill his enemies after he gives them one of its feathers.

The Flying Serpent is one of the slightly better made PRC films – even so, it looks cheap. The supposed New Mexico locations never go beyond the good old reliable Hollywood location of Bronson Canyon, albeit with the addition of two matte shots of a pueblo in the background that are repeated a number of times throughout. Sam Newfield’s directorial set-ups are dull and visually unexciting. The Quetzalcoatl bird looks wobbly on its wires. The film’s only real virtue is George Zucco acting his head off in the lead.

Larry Cohen’s Q – The Winged Serpent (1982) is sometimes considered to be a remake, although neither film is related despite very similar premises of a Quetzalcoatl bird alive in the present-day. Q can however be considered a much more ambitious workover of the ideas here.