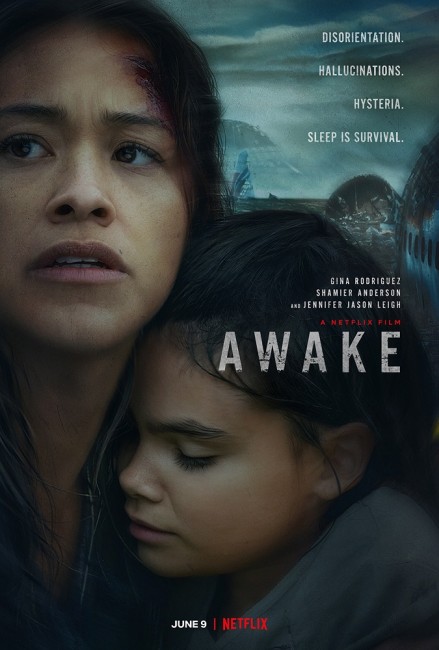 Jill Adams, a former soldier now working as a security guard, is driving home with her two children Noah and Matilda when something causes cars everywhere to fail. A vehicle crashes into theirs, plunging them into a river. They are able to escape and two EMTs bring Matilda around. It appears that power has gone off everywhere. It is then discovered that nobody is able to sleep anymore. Jill encounters her former commanding officer Dr Murphy who has set up The Hub to investigate one elderly woman who is still able to sleep. When Jill lets slip that Matilda can still sleep, this makes her eagerly sought by members of her mother’s church. Murphy’s assistant Brian follows Jill home, appealing with them to come to The Hub. Reluctantly deciding that this is the best option, Jill sets out on a journey across a country that is collapsing into chaos.

The last few years have seen a unique series of Catastrophe films – works in which some event causes one of the human senses or a mental faculty to be lost or severely impaired. This has included efforts such as Blindness (2008) about a worldwide plague of blindness; Perfect Sense (2011) where people are slowly losing each of their senses; The Last Days (2013) where the world is affected by extreme agoraphobia; Embers (2015) and Little Fish (2020) where the entire population suffers from amnesia; A Quiet Place (2018) and The Silence (2019) where everyone is forced to become silent after an invasion by creatures that kill anybody who makes a sound; and Bird Box (2018) where people are killed if they look outdoors or remove their blindfolds.

A few months before seeing Awake, I had just read another treatment of the worldwide plague of insomnia in H.G. Bells’ novel Sleep Over: An Oral History of the Apocalypse (2018). I also subsequently became aware of the short-lived tv series Day 5 (2016-7), which ha the premise of a pandemic causing people to be unable to sleep, which I have not seen as yet.

Director Mark Raso does a solid job setting up the scenario. He delivers a number of strong and dramatic scenes – with the churchgoers trying to grab young Ariana Greenblatt and the abrupt shooting of Finn Jones in the midst of the panic; Gina Rodriguez trying to hold off a mob of freed convicts with a gun she doesn’t realise is nearly empty; the crowd who attack the car along the route, smashing the windows and trying to drag them out.

The film reaches a grim climax with paranoid soldiers shooting everything up (where Gina Rodriguez and family managing to remain remarkably unscathed in the midst of the fire). Although the most chill parts of these scenes are those with Gil Bellows’ doctor who has visibly trembling hands where we see he has opened the skull of a lab chimpanzee ostensibly to drain the fluid build-up in its brain caused by the sleeplessness – whether legitimate or not, it gives a sense of science gone completely amok.

The complaint one could make is that the film skips over sections far too quickly. You have no sense of how many days have gone by – it, for instance, only feels like it is the morning after the catastrophe when Jennifer Jason Leigh announces The Hub has been set up at the same time as the people at the church try to grab and/or sacrifice Ariana Greenblatt. While not getting a single night’s sleep can be distressing, it is surely an overreaction to be turning to miraculous solutions and sacrifice the very next day. Not to mention setting up an entire laboratory to scientifically study those who cannot sleep in that time – it would surely take a lot more than that just to determine the effect is worldwide. What the film needed is for these scenes to be pushed further into the show to a point when people were maddened by their sleeplessness or that there be some intermediate scenes, particularly where we see people trying to get more of a grasp on the plague of insomnia and how it is affecting everyone.

You could probably also quibble about the film’s depiction of people that have been awake for an untold number of days – at one point it is said they been awake for four days but the journey continues on for several more days than that. The longest any human being has been recorded as going without sleep is eleven days. The problem is that after the untold amount of days they have supposedly gone without sleep, none of the cast seem to display any of the symptoms associated with sleeplessness. After 24 or more hours without sleep, a person is likely to experience increasingly impaired coordination and ability to make decisions, including to wit:- brain fog and inability to focus and the longer it goes on muscular tremors, memory loss, active hallucinations, paranoia, depression and anxiety, as well as dark circles under the eyes. By contrast, the cast seem to go through the film giving the impression that they have barely even spent a single sleepless night. The most we get comes right towards the end where Gil Bellows’ doctor is seen exhibiting hand tremors and the soldiers become paranoid and start shooting but this is the only actual effect of the sleeplessness that anybody displays throughout other than constantly telling us how tired they are.

This was the third film for director/writer Mark Raso who had previously made the non-genre likes of Copenhagen (2014) and Kodachrome (2017).