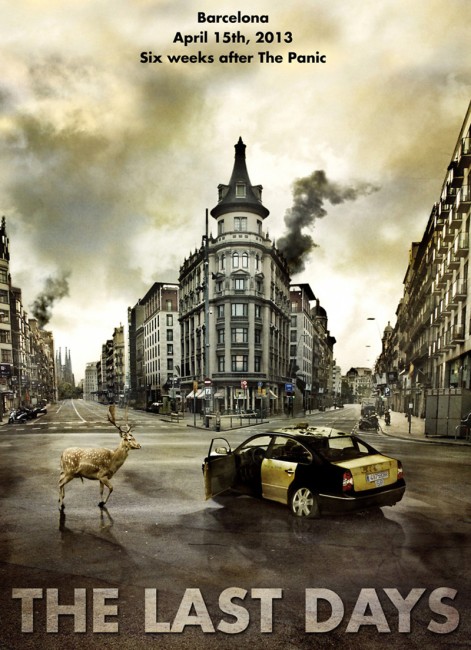 The world has been struck by a plague known as The Panic, which may have been caused by a volcanic eruption. This has left the population with an extreme state of agoraphobia, fatally afraid of going out of doors to the point that those who have been forced out have died of heart-attacks. In Barcelona, programmer Marc Delgado has been trapped inside his office building with his co-workers for the last three months. With supplies dwindling, he leads efforts to break through into the subway tunnels beneath the building. Marc goes to Enrique who was sent to fire him. He saw Enrique take a GPS unit and blackmails him into cooperating. Together the two of them set out following the GPS, Marc to find his girlfriend Julia, Enrique his hospital-ridden father. On their journey through the subway and sewers, they find a population that has descended into anarchy and are desperately clinging to any means of survival.

The Last Days is the second film for Spanish brothers Alex and David Pastor. The two had previously written/directed the excellent Carriers (2009) about a deadly plague outbreak. They have also worked as screenwriters for the ghost story Out of the Dark (2014) and Tarsem Singh’s bodyswap thriller Self/less (2015) and created the tv series Incorporated (2016-7) about a future dominated by monolithic all-powerful corporations.

The Last Days falls into a mini-genre of what one might call personal apocalypse films. The progenitor of these was probably the Canadian End of the World film Last Night (1998), which eschewed the spectacle of mass destruction, even any explanation of the end of the world, in favour of a story about how individuals greet the end. We have seen more recent variants such as Blindness (2008) in which the world is infected with a plague of blindness; Perfect Sense (2011) where everybody starts to lose their sense one by one; Embers (2015) where the world suffers from a plague of retrograde amnesia; A Quiet Place (2018) and The Silence (2019) where the world is forced to become silent after an invasion by creatures that kill anybody who makes a sound; and Bird Box (2018) where people are killed if they look outdoors and are killed if they remove their blindfolds. These are character driven stories made for arthouse audiences rather than big effects spectaculars.

The Last Days is initially unassuming in the way it places us into the midst of its apocalypse, showing the people at the office, dishevelled and unshaven, queuing up for the last of the meagre food supplies, which is contrasted with flashbacks to the warmth of Quim Gutierrez and Marta Etura at home and the day-to-day life of the office. The full shock of what the world has turned into does not come until some minutes later when they travel down the subway and come to the first platform where dozens of people shelter in a makeshift refugee encampment. This turns into a desperate flight through the camp in pursuit of the boy who has stolen Jose Coronado’s bag. A former police officer shows his badge and then laughs off how useless it is, leaving us wondering just what the world we are in the midst of.

The rest of the journey is filled with hauntingly effective imagery – like when they arrive at the apartment and in the background see that the family have hung a line of dead birds up on a clothesline presumably so they can eat them; the flashback in which the man is evicted from the building by security after being found to have been living inside the office, only for him to start having a heart-attack once he is thrown out onto the street; or during the apocalypse in the supermarket where Leticia Dolera elects to be burned alive rather than escape the fire by going out the exit door.

Often assumptions we initially make about characters is reversed or turned on its head – the man inhabiting Quim Gutierrez and Marta Etura’s apartment turns out not to be a threat but simply an immigrant defending his family and with nowhere else to go. The central thrust of the story is about Quim Gutierrez being forced to make friends with Jose Coronado, the same man who was sent to fire him. Throughout the course of the journey, Jose Coronado’s initially ruthless seeming character is turned inside out and we see his vulnerabilities – how he was going to visit his bedridden father and the story of how he had a life-crisis after finding one of the early Panic victims had died and been left in his office unnoticed for days.

The film arrives at an appealing uplift. [PLOT SPOILERS]. Quim Gutierrez makes a titanic struggle out into the open between buildings to be reunited with his love Marta Etura. In a series of cuts, we then see that they have given birth to the baby and the child has grown up and is able to go into the outside world unaffected where he joins a group of other children as they run off to play in the now overgrown ruins of the city.