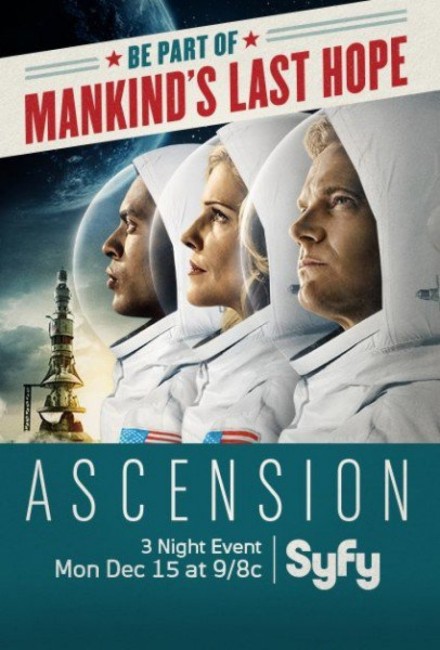 The spaceship Ascension was launched in the 1960s and is now fifty years into a hundred year journey to Proxima Centauri. Its six hundred-person crew will live and die their lives on board and it will be their children that will see the new world. Life is strictly controlled in terms of birth, while there is rigid hierarchy between the officers who lead a privileged life on the upper decks and the workers in the lower decks. After Lorelei Wright is found dead on the ship’s artificial beach, they are faced for the first time with a murder on board. Captain Denninger appoints his second-in-command Aaron Gault to investigate and Gault comes to the realisation that someone has managed to smuggle a gun on board. What none of them know is that Ascension is in fact a top secret simulated experiment back on Earth overseen by Harris Enzmann whose father started the project. Samantha Krueger is brought in by the project heads to investigate the murder but comes to the realisation that Harris is covering up much about the project, including that Christa Valis, one of the children aboard Ascension, has developed vast psychic potential.

Ascension is a US-Canadian tv mini-series that aired in three two-hour slots (although the way the episodes are numbered, it looks as though this was intended to be one two-hour movie followed by four one-hour episodes). It was originally envisioned that this would launch a series – something that one finds a bizarre idea (more on that below) – but this never went ahead. The mini-series has certainly managed to rope in some interesting names in the director’s chair – including Vincenzo Natali, director of Cube (1997), Cypher (2002) and Nothing (2003), and Robert Liebermen, director of Fire in the Sky (1993) and Earthsea (2004), each handling an episode. The mini-series was created by the relatively unknown Adrian A. Cruz and Philip Levens, previously a story editor and producer on shows like Smallville (2001-11) and Knight Rider (2008-9).

The generation ship idea has been only sporadically conducted on film before. The generation ship was posited as an alternate to faster-than-light space travel – of a spaceship than can travel to the stars at existing speeds but where the length of the journey necessitates that one generation of people begin the journey, live and die aboard and it is their ancestors who finally arrive at the destination. Generation ships have turned up in the occasional episode of tv series like Doctor Who‘s The Ark (1966) and The Ark in Space (1974), the Star Trek episode For the World is Hollow and I Have Touched the Sky (1968), Space: 1999‘s Mission of the Darians (1975) and The Orville‘s If the Stars Should Appear (2017), in one previous Canadian tv series Starlost (1973) and the film Pandorum (2009). Although what must be said is that here we don’t have a full generation ship story but only a fake one where it is revealed part way through that the crew we thought were on a deep space mission are in fact still back on Earth and that this is an elaborate social experiment. Surprisingly, this is something that has also been conducted before in the Doctor Who episode Invasion of the Dinosaurs (1974) wherein Sarah Jane Smith is abducted and placed aboard a ship only to find this is a ruse by a scientist who is planning to transport everybody back in time.

Ascension starts well. We go from the aftermath of the launch where we see the crew dressed in 1960s-styled clothing and a news clip that places everything within the context of the Space Race. We see the schemings and torrid love affairs going on aboard, before a great shot that pulls back up and passes through the central core to show the multiple striated levels the ship operates on and then keeps on going back to reveal it is a spaceship rotating in space and there are stars outside.

I soon became fascinated with the social scenario the mini-series creates. The model for the deep space mission through almost every tv series like Star Trek (1966-9), and Battlestar Galactica (2003-9) is that of the military command structure. Here instead, this is more fascinatingly fraught – the captain is a position that is voted on by the council more akin to a mayoralty, while the ship maintains a rigid class hierarchy not dissimilar to the way the compartments operated in Snowpiercer (2013). As compared to Star Trek et al, we get a fascinating glimpse of the power behind the command – of the backbiting and stabbing for control and how the captain’s wife (Tricia Helfer) sleeps her way to maintain power, even maintains a cadre of ‘hostesses’ for the express purpose of doing so. (If nothing else, this is a show that positively sizzles in terms of the amount of bare flesh it has on display).

The script throws some challenging ideas into the mix – of what happens in a hermetically closed environment when the first murder the society has known in fifty years happens and how it managed to occur when no firearms were brought on board at the outset of the mission. There is the appealing idea of Brandon P. Bell being assigned the role of investigating detective when such a thing has never existed aboard the ship and is forced to go to the library to look up classic detective movies for clues about what to do.

The first two-hours gives us a depiction of life aboard the ship and takes us through the murder investigation. This works very well and most promisingly. The great kicker that comes at the end of the episode [PLOT SPOILERS] is when Brandon P. Bell gets into a fight with Brad Carter and the latter is ejected out an airlock – only to fall into the supposedly airless void and then land on an airbag, followed by a pullback from this to show that everything is in fact an experiment back on Earth. Although by the time the second two-hour slot started, I must admit that I was having credibility issues with the set-up. It must be one that requires that no astrophysicists or engineers are aboard the mission. When we see the exteriors of the Ascension, it is supposedly rotating. However, the interior of the ship is built vertically as though everybody was living in a circular office block or apartment building. A spaceship has no gravity of its own – the way it would achieve such is by centrifugal spin where if it rotates at sufficient speed objects are pushed outwards and people are able to enjoy the semblance of gravity on the inside surfaces furthest from the centre. You can see this demonstrated in 2001: A Space Odyssey (2001) where Gary Lockwood does a complete circuit around the rotation of the habitat sphere. On Earth, when this would happen, the greater gravity of the Earth’s mass would simply cause people to fall off the rim. Confusingly, the people inside the ship are oriented vertically as they would be for Earth gravity and yet the spaceship is also seen rotating. It is a set-up that requires nobody aboard to ever asks how gravity is achieved – something that would require not teaching basic physics, which seems an absurd idea for a bunch of people going off to supposedly colonise a new world.

The first two parts of Ascension create a great set-up – life aboard the ship, the pull back to reveal it is all a social experiment – but things started to fall apart in the third part. The investigation of the murder mystery gets overtaken by a great many other things – the in-politicking to unseat the captain, the standard evil government agency that comes in determined to not only unseat but also eliminate Gil Bellows (best line of the film is when investigator Lauren Lee Smith decides to go whistleblower: “We’re going to go the Full Snowden”), the scenes with Lauren Lee Smith trying to introduce Brad Carter to the outside world for the first time and get the truth of what happened out, and especially the left field plot element about young Ellie O’Brien demonstrating psychic powers and the race between a bunch of parties to obtain/protect her.

Unfortunately, the wrap-up the series eventually opts feels somewhat half-hearted – after being built as the most sympathetic character, Lauren Lee Smith is simply eliminated; the murder mystery is solved in a perfunctory way – and rushed. The most confusing aspect is the final image where Ellie O’Brien’s powers manage to teleport Brandon P. Bell to another planet. What this means, whether this was the real purpose of the experiment is left unexplained. It feels like either a mini-series that was never intended to be such having a forced-on ending.

Certainly, all of this leaves you scratching your head wondering how any of this could have been spun out as a tv series – would the series have followed the in-politicking among the various decks of the ship and contrasted this to the in-politicking back at mission control? If so, the idea of a series set around a faked space mission seems very limited in nature. Either that or would everybody have been teleported to the new world by Ellie’s powers and the series start from there akin to Earth II (1994-5) dealing with the colonisation of an alien world? If so, it seems a bizarre dogleg of a plot to get there.