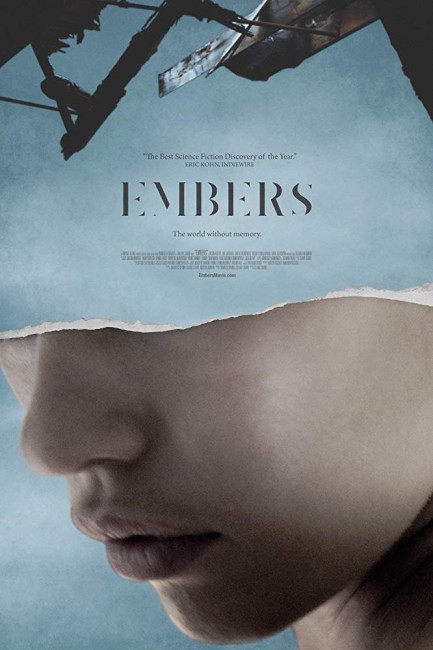 The world has been affected by something that causes amnesia. The survivors wander the ruins with no idea of who they are as their memories periodically blank and reset. A man and a woman wake together – they think they know each other and try to piece together clues about their past. A young child wanders the ruins and is taken in by a former professor who is trying to create a system to help him remember. A chaotic individual runs through the ruins, snatching what he wants and engaging in acts of violence and vandalism. Miranda lives in a bunker with her father protected from what has affected the surface. However, she is tired of her closeted existence, even though she knows that going outside will obliterate all memory of who she is.

Embers was a debut feature for Claire Carré, an American director who had previously worked in commercials and music video. Embers received reasonable film festival play.

Embers falls into a mini-genre of films dealing with social collapse following a catastrophe that has removed or severely impaired one of the main senses or human faculties. You are reminded of works such as Luc Besson’s Le Dernier Combat (1983) where people have lost the ability to speak; Blindness (2008) about a worldwide plague of blindness; Perfect Sense (2011) where people are slowly losing each of their senses; The Last Days (2013) about a plague that causes extreme agoraphobia; A Quiet Place (2018) and The Silence (2019) where the world is forced to become silent after an invasion by creatures that kill anybody who makes a sound; Bird Box (2018) where people are killed if they look outdoors or remove their blindfolds; and Awake (2021) where the whole world can no longer sleep.

Of course, the work that Embers makes you think of the most is Christopher Nolan’s Memento (2000) albeit where Guy Pearce’s case of periodic anterograde amnesia has been extended across the whole population. The basic idea was taken up by the subsequent Apples (2020) and Little Fish (2020), both about amnesia-inducing plagues.

Embers is very much an indie festival film as opposed to a disaster movie filled with large-scale catastrophes. As a result, it lacks a real plot that goes from A to B and would typically end on a big dramatic climax where characters would usually fight back against the resident menace – A Quiet Place is a perfect example.

Rather what we have is series of vignettes that follow a variety of different characters. These are filled with haunting images – Jason Ritter and Iva Gocheva as a man and women who wake up together and guess that they must be a couple and try to work out the details of their life; Matthew Goulish as a man who meets a lone child (Silvan Friedman) and gives him his watch after which the boy accompanies him before a reset whereupon the man then turns and wonders why the boy is wearing an oversized watch.

Two of the most haunting pieces are the scene where the character known as Chaos played by Karl Gluckman, who has rampaged his way through the film taking what he wants with his fists and randomly engaging in acts of vandalism, is beaten up by a gang of people. Reduced to tears, he staggers to the top of a roof and stands ready to throw himself over the edge. However, he undergoes a memory reset at that moment and forgets what he was intending to do and goes back to his old self, picking up the bottles nearby and gleefully throwing them at a person in the alley below.

The other such scene is the one where Jason Ritter and Iva Gocheva wander the ruins, she cuts her foot on a nail and he tells her to wait there while he goes to get some water. He enters a building, emerges with a bottle of water and then undergoes a memory reset, looks at the bottle puzzled, drinks from it then puts it in his bag and wanders off in the opposite direction, she entirely forgotten about.

Claire Carré shot the film in a variety of locations ranging from Gary, Indiana to upstate New York and Poland. These provide a series of ruined locations that look highly effective on screen – be it the series of alleyways strewn with ruined debris, warehouses filled with unidentified items left packed in rows and rows, Iva Gocheva left sitting with a wounded foot in an area where an entire building has been reduced to a heap of boards, even an entire ruined church.