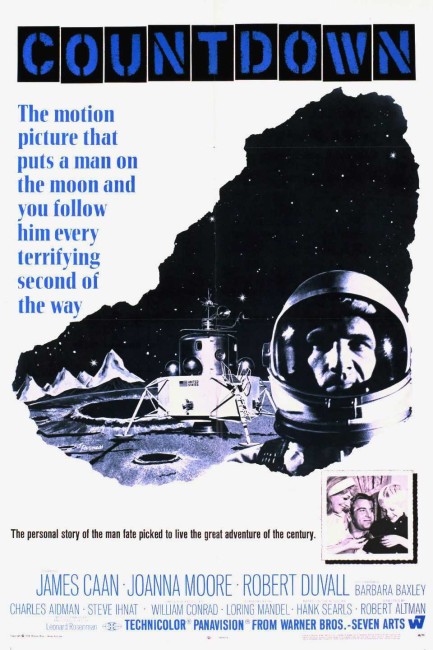 As the Russians launch their first mission to orbit a man around The Moon, the Americans race to prepare Pilgrim 1, with which they intend to beat the Russians and be the first mission to actually land on The Moon. They then receive instructions come from above that in order to demonstrate the non-military nature of the mission, the mission’s astronaut Chiz Stewart, an Air Force colonel, is to be replaced by Lee Stegler, a civilian. This is a move that gives Stewart severe doubts about the feasibility of the mission.

Countdown was the third film from Robert Altman. [Altman’s next film was M.A.S.H. (1970) and the rest is history]. Countdown was released over a year before the real Moon landing in 1969 and as such is a fascinating artifact from the era of the Space Age. Up until that point, Countdown was the most realistically detailed fictional account of a space launch and Moon landing ever conducted – it even goes to the extent of filming on location at Cape Canaveral.

Certainly, it gets one or two things wrong – the real Moon Landing had three men not one. More importantly, the real thing was a there-and-back-mission – here the lander cannot take off and the film improbably proposes that the astronaut must stay in a shelter on The Moon for up to a year to wait for a rescue mission to be constructed. Nor does the film see much media hoopla occurring around the launch, whereas in actuality every step of the real-life mission was breathlessly followed around the world via television.

On Countdown, Robert Altman was working as a director for hire – he had just come from a great deal of acclaimed work on numerous tv series. However, it was not until the likes of M.A.S.H. and subsequent films like McCabe and Mrs Miller (1971) and Nashville (1975) that Altman would develop the distinctive style of idiosyncratically dry humour and multi-layered dialogue scenes that became his trademark. Altman also later expressed dissatisfaction about how Countdown was re-edited against his wishes – studio heads apparently took a dislike to his having characters both speaking at the same time, fired Altman and took over final cut.

Nevertheless the film is a good drama about the build-up to the launch. The film pairs James Caan and Robert Duvall, several years before either broke through as big names after they were paired up again in The Godfather (1972). Caan is serviceable but it is Robert Duvall who stands out in a forceful, hard-headed performance.

The relative disappointment of Countdown as science-ficion is that Robert Altman seems to lack interest in what happens once the film gets into space. It is over an hour of the film before we get off the ground and when we do the Moon landing is never milked for anything more than technical drama. There are, for example, no effects or model shots used, no exteriors of the capsule – all we see are dramatic crosscuts between Robert Duvall in mission control and closeups of James Caan’s face and occasional shots of the Moon’s surface reflected in a mirror above Caan’s head in the capsule. Nor does Altman seem concerned with any sense of wonder – there is no time spent dealing with weightlessness either in the capsule or when James Caan walks on The Moon. The arrival at the shelter seems an abrupt anti-climactic ending – it is in fact the point that the film should have started to get interesting.

Robert Altman’s other films of genre interest are:– the completely gonzo Brewster McCloud (1971) about a young man who is invoked to build a set of wings by an angel; Images (1972) with its surreal games of identity blurring; 3 Women (1977), a cryptic film about identity blurring; Quintet (1979), an enigmatic film set in a frozen future; Popeye (1980), a live-action adaptation of the famous comic-strip; and A Prairie Home Companion (2006), an ensemble film based on the famous radio show, which features a visiting angel of death.

Countdown also came from the production company formed by actor William Conrad, the big man best known as the star of the tv series Cannon (1971-6) and less well known as the narrator of a host of tv series.