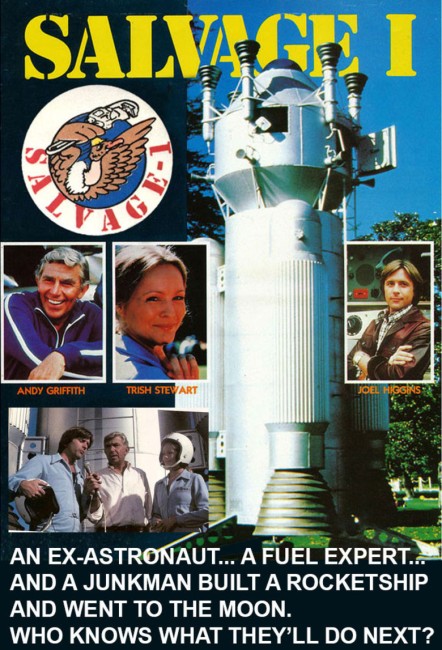 Harry Broderick runs the Jettison Scrap and Salvage company where he buys up and resells junk from all over the world, always managing to come up with a canny idea for a deal in the process. After seeing a tv program about the millions of dollars in used equipment that has been abandoned by NASA during the Apollo Moon missions, Harry has the idea of salvaging it. He recruits former NASA scientist Skip Carmichael, who has maverick theories about going to The Moon using less fuel, and chemical engineer Melanie Slozar, who plans to create a powerful new fuel out of Mono-Hydrazine. They build a rocket, which they name Salvage 1, using salvaged parts and prepare it for launch. At the same time, Harry must also deal with an FBI agent who finds their activities suspicious. Racing against the clock with an unstable mixture of fuel and before the FBI execute a search warrant, Harry determines to launch Salvage 1 and fly to The Moon.

Salvage was a pilot for a short-lived tv series. The subsequent series Salvage 1 (1979) followed the adventures of the trio of characters introduced here and saw them encountering the likes of aliens, robots, giant apes, lost treasures and towing an iceberg (although many of the episodes were also mundane and non science-fictional). Isaac Asimov was even brought in as scientific advisor. The series only lasted for eighteen episodes in one-and-a-half seasons throughout 1979. Also on the credits is the name of Harve Bennett, a tv producer around the time with shows such as The Six Million Dollar Man (1973-8), The Invisible Man (1975) and The Bionic Woman (1976-80), and later inheritor of the classic Star Trek film franchise.

Salvage came towards the end of the Apollo Moon space program, where the initial vision created by John F. Kennedy had petered out amid funding cutbacks and where general interest in space had swung more towards the new advent of the Space Shuttle. Consummate with the sense of disillusionment, around the same time as Salvage aired, there was also Capricorn One (1978), a film that lamented the end of the Space Mission and rewrote it by way of a post-Watergate cover-up. Elsewhere, the rivalry with the Soviet Union that had been a major driving force in the Space Race was thawing towards entente and a few years later perestroika – in perhaps the last grasp of this, Salvage has a scene where Andy Griffith blackmails FBI agent Richard Jaeckel into cooperating with the threat of selling the salvaged NASA equipment to the Russians.

In recent years, there have been a number of films that have taken up the idea of private citizens conducting their own ventures into space with the likes of The Mercury Project/Rocket’s Red Glare (2000) and The Astronaut Farmer (2006) – you could even include here Clint Eastwood’s Space Cowboys (2000) about a group of old-timers hijacking a shuttle mission for one rip-roaring adventure back up into orbit.

Being the first of these, Salvage‘s use of the idea was original back in its day. The script makes a point of giving the science a seeming authenticity that might almost work – one scene offers the appealing idea of a trip to The Moon as demonstrated by a car driving around a racetrack. Indeed, the film even offers a very early demonstration of an internet connection with Joel Higgins conducting a hack-in via a phone-line to get coordinates from NASA’s computer.

Salvage is clearly enamoured of the entrepreneurial hucksterism of Andy Griffith’s character – in the opening scenes, we see him buying up a biplane and selling it to a restaurant owner who wants it as a gimmick (even faking an ‘authentic’ bullet hole in the undercarriage), while at the same time gutting the engine to sell off to a plane restorer. (These scenes also show Andy Griffith using a very early car phone). Salvage is very much a film fired up by belief in the great American spirit of bolder-than-life salesmanship where a blurred adherence to telling the truth or faking things is seen as something admirable. Like most of the abovementioned films about private citizens venturing into space, the film creates stock villains out of the FBI and NASA, seeing them tightass bureaucrats using the nebulous excuse of the public good to clamp down on independent adventuring.

On the minus side, the film has only been granted the medium budget typical of tv shows of the era. There is only a modest number of special effects – we never see any of the space junk on The Moon or the crew loading it into the ship, for instance. There is little shown of The Moon’s environment beyond a single partial set of the Lunar surface. Lee Philips’ direction is relatively nondescript, although he makes the film move well and does generate some tension during the re-entry scenes.

Lee Philips was a regular tv director of the era whose career spanned from the 1960s to the 1990s, although he never had a theatrically released film. He made occasional other ventures into genre material with the alien impregnation tv movie The Stranger Within (1974); the occult tv movie The Spell (1977); and the James Michener-adapted tv mini-series Space (1985), which tells a fictionalised account of the Space Program.