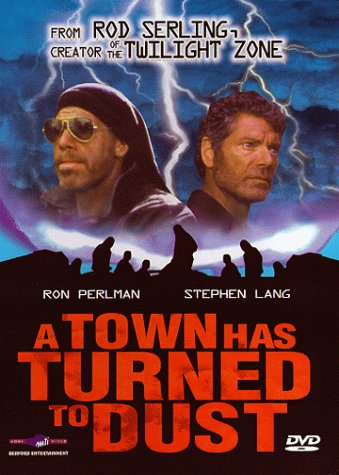 The year 2215. Hannify travels from New Angeles to Earth, which is now a desert wasteland divided into two camps, The Drivers, who scavenge the ruins for scrap metal to sell to New Angeles and The Dwellers, descendants of American Indians, to make a documentary about conditions there. He is witness as a lynch mob under the Driver leader Jerry Paul force their way into the jail past Sheriff Harvey Denton and hang a Dweller boy Tommy Tall Bear who was accused of attempting to rape Paul’s wife. Shocked by this, Hannify digs deeper and discovers that the truth concerning the incident is not what it seems.

This is an interesting little film that screened directly on the USA’s Sci-Fi Channel. It, at first glance, shapes up as being a standard post-holocaust tale. It has been shot on the cheap in Utah – all industrial locations and colour filters that are economically used to suggest an altered landscape. Unlike most modern post-holocaust tales however, it is not an action film but is a strongly character driven morality story about lynch mobs and prejudice.

As is prominently mentioned in the promotion for A Town Has Turned to Dust, the script is written by Rod Serling, the legendary creator and host of tv’s The Twilight Zone (1959-63). The interesting thing about this is that even though the screenplay is attributed to him alone, Serling died in 1975, more than two decades before the film was made. The even more interesting realisation about the film as it unfolds is that one realises that Serling originally did not even write it as a science-fiction film but actually wrote it as a Western. The original was a tv play that aired on Playhouse 90 in 1958 (with no less than William Shatner as the mob leader who is played here by Ron Perlman). The story was nominated for an Emmy, although Serling personally was deeply disappointed when the angry racial elements of the story were watered down by networks.

All someone has done here is transplant the frontier setting to the post-holocaust future. The new version still clearly retains identifiable elements of the Western, including the sheriff and miners – in fact, little is done to disguise the fact that the Dwellers are meant to be Indians. In that there is no credit for script collaboration or adaptation, it appears that Serling’s original script has been left intact word-for-word, bar a voiceover at the beginning and end describing the futuristic scenario. There is the clear sense that the setting has been transferred to a science-fiction one because of Rod Serling’s association with the genre, nevertheless the update works well. The story has Serling in full moralistic flight and is a potent and stinging expose of lynch mob justice. Both Ron Perlman and Stephen Lang give fine performances.