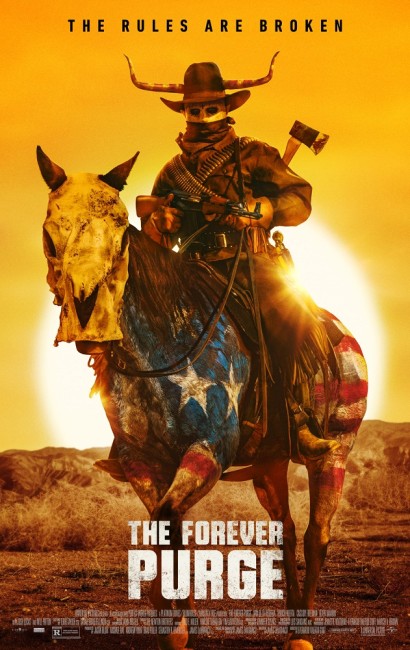 Following the election, The New Founding Fathers have regained control of the US government and The Purge Night has been restored. In Los Feliz, Texas as Purge Night comes around, rancher Caleb Tucker and his family and spend the night safely in their home, while Caleb’s horse handler, the Mexican illegal immigrant Juan and his wife Adela, spend their night in the local Mexican compound. As both emerge in the morning, they come under attack by people who are still Purging. Caleb is killed, while Adela is attacked in the street. Everywhere a movement called The Forever Purge rises up, wanting to purify the country of racial elements. Caleb’s son Dylan grabs his semi-trailer cab, and along with his Juan, Adela, his pregnant wife and sister tries to drive through the chaos that suddenly engulfs the entire country. Both the Mexican and Canadian government agree to open their borders for a window of six hours for Americans to flee. Under attack by rioters on all sides as the military is unable to hold back the onslaught, the group try to make it to the safety of the Mexican border.

The Purge (2013) was a film that came with what I have always considered a fundamentally implausible premise – one night of the year where all crime is deemed legal. It did however make $89 million in theatrical release. This proved enough for co-producers Blumhouse and Platinum Dunes to create a sequel The Purge: Anarchy (2014) and then keep on producing more of them with The Purge: Election Year (2016), the prequel The First Purge (2018) and even a tv series The Purge (2018-9). The Forever Purge emerges as the fifth film in the series.

The Purge series has always felt like a curious mix of overlapping creative interests. It is a co-production between Blumhouse and Michael Bay’s Platinum Dunes, companies that are headed by two talents that could not sit further apart on the political spectrum. On one side of the fence sits Jason Blum and his Blumhouse company that has been at the forefront of Hollywood’s Woke wave – they are after all the ones that propelled Jordan Peele to a hit genre director with Get Out (2017), a film that broke through many doors in the way it was embraced by the public – and have consistently pushed for a more inclusive agenda and to give voice and presence to minority names. Blumhouse became expressly political in producing The Loudest Voice (2019), a mini-series biopic about Roger Ailes, the force who turned Fox News into the toxic waste dump that it is.

On the opposite side of the coin sits Michael Bay who readily promotes a conservative agenda. Bay’s Transformers films are unapologetically red-blooded and testosteronal and filled with American flag-waving nationalism, while Bay also directed 13 Hours: The Secret Soldiers of Benghazi (2016), a blatantly propagandist piece based around an incident where Republicans tried to drum up something conspiratorial in their concerted efforts to demonise Hillary Clinton during the run-up to the 2016 election.

James De Monaco, the creator of The Purge series and director/writer of the first three films, stepped back from the director’s seat after the third film, although has continued to write the scripts for both the sequels. This is about the point that The Purge series has gone from a series of efficient actioners to become highly political. It always bubbled away in the first three films but with The First Purge DeMonaco handed the reins over to African-American director Gerard McMurray and the film took a full-on dive into the era of Black Lives Matters. (It would appear that with these films that Bay has simply sat back as a silent partner, unconcerned for politics and scooped in the profits while allowing Blumhouse to do their thing and push an increasingly liberal agenda with each film).

This continues with The Forever Purge where Blumhouse have handed the directorial reins over to Everardo Valerio Gout, a Mexican director who gained attention with the crime film Days of Grace (2011), which also starred Tenoch Huerta, and subsequently came to the US and has been directing assorted tv episodes before making his English-language feature debut here. Gout gives this entry a specifically Mexican focus, recruiting Mexican leads and allowing large sections of dialogue to take place in Spanish.

Not to mention, Gout and DeMonaco make the film even more political. They take up US-Mexican relations in the era of MAGA and Donald Trump. It may or may escape people’s attention but the two lead characters in the film are undocumented Mexican immigrants, which is quite a radical step for a mainstream US film. The course of the film also has Americans seeking to flee to Mexico to avoid the collapsing chaos of a white supremacist revolution (and in one of the more appealingly satiric moments having to enter the country illegally). And when they do arrive, they are promptly referred to as ‘American Dreamers’, a reference to the colloquial name for controversial DACA Act that granted a path to citizenship for persons who had entered the US illegally.

This is also a Purge film that has clearly been written after the Capitol Riots of January 2021 where assorted Donald Trump supporters stormed the US Capitol Building at Trump’s urging in an attempt to stop the inauguration of Joe Biden over what they believed to be a stolen election. The Capitol Riots had a quick and less than glorious end but The Forever Purge sees the MAGA mob as having expanded their efforts and overthrown the entire US and plunged the country into lawless anarchy. In the original Purge films, the Purgers were just random lawless crazies on the streets but here they have specifically become white supremacist supporters who are seeking to racially purify the country and bring back a return to American Values – there is even a scene where the group come across rioters who demand at gunpoint that the whites amongst the group shoot the Mexicans. If nothing else, you are intrigued to see where the next film in the series would take things as the Forever Purgers wake up to suddenly discover in their zeal that they have caused the entire country to collapse.

All of that said, I think The Forever Purge is more interesting in terms of its politics than it actually is watching it as a film. Everardo Valerio Gout does an okay job producing a good deal in the way of shooting, hand-to-hand combat, explosions in the streets and the like, although nothing that feels particularly standout or memorable – the climactic scenes do seem to take a few leaves from Jonas Cuaron’s Desierto (2015) with the group hunted by a determined vigilante. There’s an okay cast, including the talented and rising name of Ana de la Reguera, but there is nobody you are rooting for or feel particularly upset when they get killed.