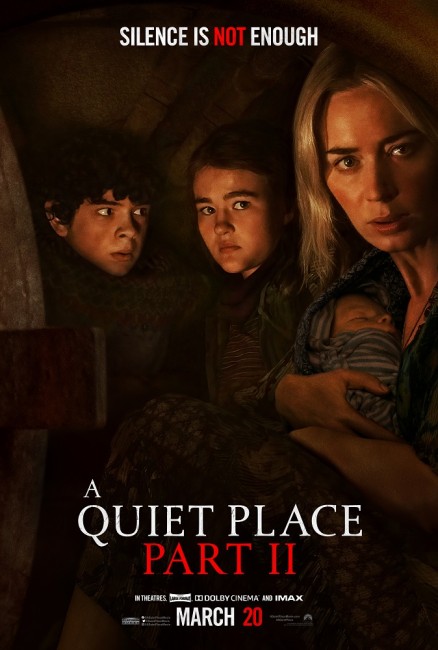 Following the death of her husband Lee, Evelyn Abbott and the children move on in search of a new place to live. However, the area they pass through has been booby-trapped and Marcus’s foot is caught in a bear trap. As his screams attract creatures, they are dragged to safety by Emmett who maintains a shelter inside an abandoned factory. He reluctantly agrees to let them stay one night. While there, Marcus picks up a radio broadcast that keeps playing the song ‘Beyond the Sea’ and Regan believes this is a clue leading to the whereabouts of other survivors. She sets out on her own to find the source of the signal. Evelyn presses Emmett to go and rescue her but the journey exposes them all to the threat of the creatures.

A Quiet Place (2018) was a sleeper hit for John Krasinski and Michael Bay’s Platinum Dunes production company. It earned an impressive $340 million worldwide. It made Best Film slot on this site’s Best of 2018 list and I also awarded John Krasinski Best Director. This was the inevitable sequel. A Quiet Place Part II did have a world premiere in March of 2020, although the rest of the world did not see it until fourteen months later due to it being held back from theatres during their closures as Covid pandemic restrictions swept the world in 2020.

The opening scene serves as a prequel that gives an origin of sorts to the creatures, where it is now definitely confirmed that we are in the midst of an Alien Invasion. Just as equally, this prequel scenes seem there in order to squeeze in a reappearance of John Krasinski’s character after he was killed off at the end of the first film. These scenes also get off pieces of cute fanservice like a return to the convenience store we saw being raided at the start of the first film, even a cameo appearance from the space shuttle toy.

As in the first film, Krasinski gets off some superbly orchestrated set-pieces. The opening comes with the best of these – we see the whole town panicking at the appearance of the burning trail in the sky and then in the middle of this the abruptness as one of the creatures appears and slams into a police car overturning it. This is followed by a scene with people huddled in the pharmacy trying to be quiet before one person’s cellphone goes off alerting the creatures lurking outside.

This gets the film off to a great start. After this, the rest of the show takes place following immediately on from the events of the first film. And Krasinski pulls the same balances of suspense and tension throughout – the venture through the booby-trapped field outside the factory only for Noah Jupe to get his foot caught in a bear trap and start screaming; the scene where Cillian Murphy is captured by bandits on the end of a wharf; both Noah Jupe and Emily Blunt facing creatures inside the factory; the invasion of the island; the creature bursting into the radio station as they race to get the signal out.

Generally capable and all as Krasinski’s new set-ups are, there are few of them that surmount being ‘more scenes involving the creatures and people trying to not make a sound’ and not enough that become grippingly intense and have you on the edge of the seat. The crucial question I think is – if this were the first film in the series, is there anything here that would have turned the film into a sleeper success? That I think is the difference. On two different occasions, Krasinski tries to get clever and intercut two pieces of simultaneous action, which I am not sure adds anything other than a desire to showoff in the editing room.

On the other hand, this does reveal the awkwardness of A Quiet Place Part II as a sequel. Nowadays, no Hollywood film exists as a self-contained entity, it is an intellectual property that can be endlessly replicated until audiences tire of going to see it. This has resulted in many films being dragged out far beyond their natural scope even when they do not sustain it – Platinum Dunes’ The Purge series being a good example.

The first film worked perfectly as a self-contained entity – it didn’t need to do much to explain its creatures, the nature of their menace carried the film entirely. As a sequel, A Quiet Place Part II reveals the tenuousness of trying to extend that premise. We encounter other survivors, are shown something of the origin of the creatures and the script builds out the means to defeat the creatures that was introduced at the end of the first film. However, we start to see cracks appear in the improbability of the premise. This is particularly evident when it comes to the newly introduced vulnerability where we learn that the creatures are unable to swim or cross water – for a species that is able to navigate across the universe, it seems hard to believe that they only discover the idea of boats so late in the game.