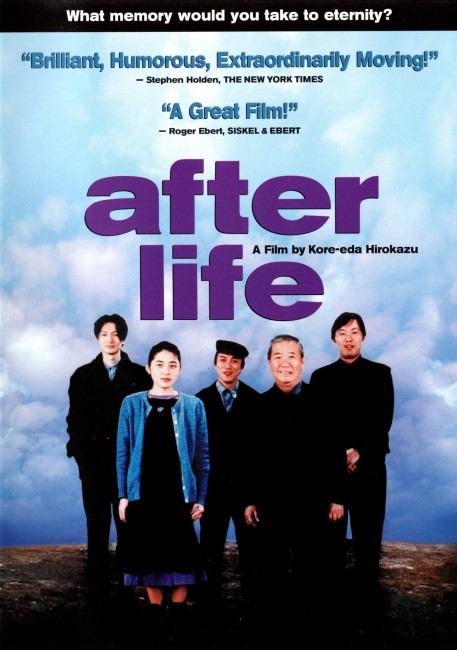 In the afterlife, a group of workers deal with an assortment of newly arrived dead. Each of the new arrivals has one week in which to select their single favourite memory so that the afterlife workers might reconstruct it and the arrivals can then pass on and inhabit that memory. However, some of the arrivals have difficulty choosing a memory.

This marvellous little Japanese film has a quiet effectiveness that kind of creeps up on you afterwards. The film comes with a sublime simplicity. Its’ vision of the afterlife is conducted with a wonderful minimalism – it takes place not in Grecian palaces in the sky or the grandiose visions of classical artwork come to three-dimensional life a la What Dreams May Come (1998), which came out the same year, but rather in what looks like a disused schoolhouse. There is almost nothing to the film other than a series of vignettes with various people standing about being interviewed – and despite this the film manages to be an absolute delight.

The interview scenes are conducted with an endearing sense of humour – the old lady who says nothing and simply looks out the window, the teenage girl who wants her trip to Disneyland recreated, the young punk who immediately announces he is refusing to choose anything. Director Hirokazu Kore-eda has a genuine affection for the banality and foibles of the people’s lives and the film manages to paint each of its subjects with considerable amusement, yet also a quiet dignity.

Unlike What Dreams May Come, After Life makes no pretense to any profound insights into the afterlife or human spiritual condition. However, the two films, each in their own way, both manage to offer unique humanist revisions of classical afterlife imagery. Quite the opposite of What Dreams May Come, After Life‘s vision of the hereafter comes with an enchanting banality, one where the afterlife volunteers have as many clues as to why they are there as anybody else does. The latter quarter of the film is highly amusing when it comes to the recreation of each person’s memory and in the sheer mundanity of the afterlife volunteers’ attempts to get the details right – not having the right plane for one memory scenario and having to saw off the wing of the plane they do have and then send pieces of cotton wool past on wires to represent clouds; or a tram scenario that is revealed as a mock-up being rocked by two of the volunteers. Quite a charming film.

After Life was the fifth film for director Hirokazu Kore-eda. Since then, he has received considerable acclaim and a number of international awards with other works such as Nobody Knows (2005), Still Walking (2008), Like Father, Like Son (2013), Our Little Sister (2015), The Third Murder (2017) and Shoplifters (2018). The only other of these to fall into genre territory is Air Doll (2009) about an inflatable sex doll that gains consciousness.