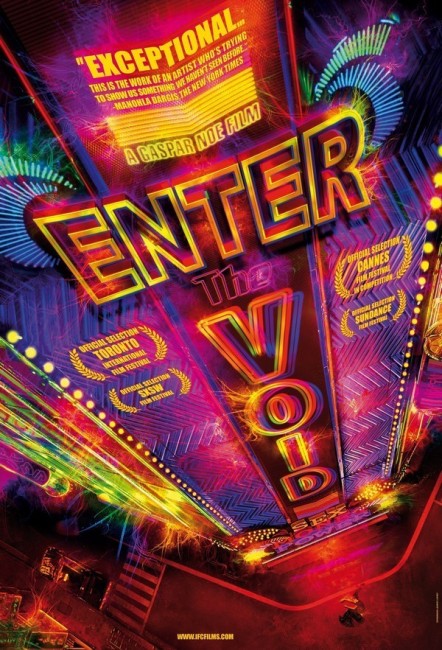 Oscar is an American living in Tokyo along with his sister Linda where he makes a living as a drug dealer, while Linda works as a stripper. During a drug deal at the bar The Void, the police conduct a bust and Oscar runs into the bathroom to flush his stash down the toilet. When he will not come out of the cubicle, the police shoot and Oscar collapses. His soul departs from his body and passes through the nearby vicinity and into the afterlife. The events from Oscar’s life replay themselves, from the time he was an infant, his separation from Linda following the death of their parents, leading up to how they came to reunite in Japan.

Enter the Void was the third feature-film from French director Gaspar Noe. Noe had a controversial arthouse and festival hit with his second film, the brutal and shocking rape and revenge effort Irreversible (2002). This, along with his first film, the equally brutal I Stand Alone (1998), has gained Noe a reputation as someone who pushes things to extremes. It was the success of Irreversible that granted Noe the budget to make this vision of the afterlife that he conceived back when he was a teenager but had found too expensive a project to get funding for. Enter the Void comes backed by a host of international companies, including being co-produced by French visual effects company Buf Compagnie, which provide the hallucinatory Day-Glo visuals.

Gaspar Noe has intended Enter the Void to exist as a sensory experience. The script is almost an irrelevancy; the film exists all in the visuals that Gaspar Noe throws at us. Noe readily plays with experimental techniques just to try something off the visual mainstream. One of the most unique tactics is the use of a first-person camera point-of-view wherein the camera stands in for someone’s eyes – we see the hero (Nathaniel Brown) from behind his back, the camera in effect standing in the same place he does throughout, and join his spirit as he departs into the afterlife. Noe was reportedly inspired by the film noir Lady in the Lake (1947) where the entire film had the camera taking an investigating detective’s point-of-view. This technique has been employed in a number of other films of recent including Russian Ark (2002), Metamorphosis (2010), Maniac (2012) and Hardcore Henry (2015).

Noe says that the film was written without any dialogue, which he allowed the cast to improvise – there are long in-camera scenes following actors through the streets where they have clearly ad-libbed their dialogue. Yet at the same time as there is a ragged improvisational quality to the film, it is also tightly controlled as every seemingly random character reference and piece of dialogue maps back over onto something else during the flashbacks.

If the substance of Enter the Void sometimes wavers – the flashback scenes are largely plotless and seem to go on probably some 30-45 minutes longer than they need to – then the film exists triumphally in terms of the beauty of its visuals. Tokyo is transformed into a world that feels akin to a nightclub lit up in Day Glo colours. These saturate the film from the urban sprawl outside the window, the interiors of nightclubs, the subjective drug hallucinations and the abstract visuals as Nathaniel Brown departs into the afterlife. It is as though one is being bodily transported into something akin to the world of Tron (1982). Indeed, Enter the Void could almost be seen as the antithesis of Lost in Translation (2003) – where both films concern Americans dislocated in Japan, Gaspar Noe rejects Sofia Coppola’s quirky sweetness and embraces the underbelly of the culture; where Lost in Translation was about people connecting, Enter the Void seems about a painful aloneness.

Gaspar Noe is a fan of Stanley Kubrick and much of Enter the Void feels like his own personal attempt to homage 2001: A Space Odyssey (1968). The homage is clear in several scenes toward the ending where we see a penis ejaculate into a vagina, follow the rush of semen and then see the fertilisation of an egg before the hero is reborn into a new body. This sequence appears to have been consciously intended by Noe as an analogue of the 2001 light trip – the images of a rush through a transcendental void of lights; the sperm hovering before the egg like a tiny ship in orbit around a vast planet; and both films climaxing with the birth of a new form of life.

This is however very much a 2001 that has been reworked for the 00s Ecstasy and trance culture generation – as Cyril Roy says to Nathaniel Brown at one point: “It’s like dying would be the ultimate trip, eh?” It is a vision born less from evolution of consciousness as it is out of drug haze and a supermarket sampling of Eastern mysticism (the Tibetan Book of the Dead features heavily both in terms of references in the film and in Gaspar Noe’s conception of it).

You could perhaps also see the inspiration of other 2001-influenced films such as Altered States (1980), which leaps off into drug experimentation and a quest for the ultimate meaning of life, and Brainstorm (1983), which harnessed 2001‘s light trips for a vision as someone departed their body to head into the afterlife. Almost identical Kubrickian allusions appear in Gaspar Noe’s Irreversible where a 2001 poster hovers with symbolic effect and there is the sense that time is being reversed to eventually head into what could be the same void of nothingness that the title here alludes to.

Gaspar Noe’s other films have all been brutal and confrontational, uneasy experiences that take the audience into raw places. Enter the Void has been called his most accessible and mainstream film yet. It is not quite, although perhaps what critics mean is that the raw, confrontational tactics of Noe’s earlier films are much more subdued here. There are still the tactics designed to shake up expectations of a film – the end credits play at the start of the film, for instance, and come fast, in bold vibrant type accompanied by a pounding soundtrack that seems to leap out of the screen to assault you. There are still plenty of the sex scenes familiar to Gaspar Noe’s other films with Paz de la Huerta spending much of the film in a state of undress. Nevertheless, Enter the Void is a film whose substantive qualities are meditative rather than emotionally raw or focused on the harsh realities of life.

(Nominee for Best Director (Gaspar Noe) at this site’s Best of 2009 Awards).