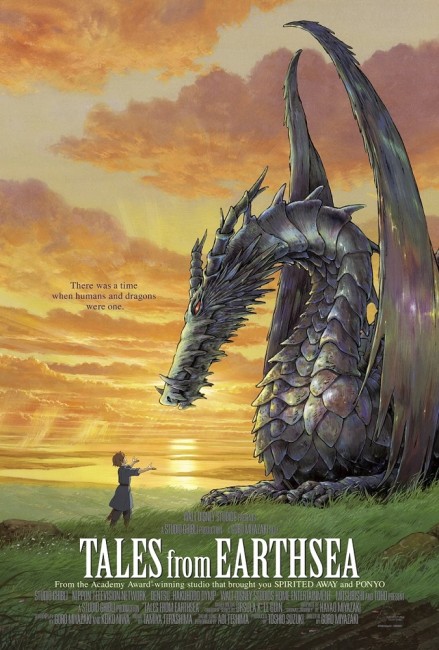 The king of Enlad is concerned about a malaise of spirit that has struck the land of Earthsea. His 17-year-old son Arren is reported missing but then reappears, abruptly stabs his father and flees. The wizard Sparrowhawk is travelling through the desert when he sees Arren being pursued by wolves and intervenes to save him. Sparrowhawk invites Arren to accompany him on his journey to Gont Town. There Sparrowhawk tries to divine the nature of the malaise that blights the land, which has caused many magicians to give up magic. Arren stands up to save a young girl Theru from being abducted by slavers. He is later abducted by the slavers himself but is saved by Sparrowhawk. This attracts the attention of Sparrowhawk’s old rival, the wizard Lord Cob. Lord Cob is trying to break down the division between life and death to become immortal – it is his sorceries that have caused the imbalance of nature. Sparrowhawk seeks refuge with his old friend and lover Tenar. Arren is surprised to find that Tenar also looks after the orphaned Theru. However, Lord Cob is determined to defeat Sparrowhawk and sends out his slavers to capture Tenar and Arren. He then persuades Arren to give up the secret of his True Name in order to lay a trap for Sparrowhawk.

Tales from Earthsea was the first film from Goro Miyazaki. Goro is the son of the great Hayao Miyazaki, who made films such as My Neighbor Totoro (1988), Princess Mononoke (1997) and Spirited Away (2001), among many others. Prior to Tales from Earthsea, Goro Miyazaki had had no experience in animation. He had worked as an architect – among one of the jobs he undertook was the construction of the Ghibli Museum in Tokyo, an entertainment park akin to Disneyland built around Ghibli’s films, and subsequently became its director. Goro claims to have not even signed onto Tales from Earthsea intending to be its director but as consultant, before being pressured by producer Toshio Suzuki into taking the job. Most people assumed that following his announced retirement with Howl’s Moving Castle (2004), Hayao Miyazaki was handing the creative reigns of Studio Ghibli over to Goro. However, the story that Goro tells in interviews in exactly the opposite. He makes the claim that Hayao angrily opposed him becoming a director and in fact tried to interfere with the production of Tales from Earthsea.

Tales from Earthsea is adapted from the Earthsea fantasy series by American sf/fantasy writer Ursula K. Le Guin (1929-2018). The Earthsea books consist of A Wizard of Earthsea (1968), The Tombs of Atuan (1971), The Farthest Shore (1972), Tehanu: The Last Book of Earthsea (1990) and The Other Wind (2001), as well as the short story collection Tales from Earthsea (2001). The Earthsea series takes place in an archipelago of 1001 islands and concerns itself (principally) with the wizard Ged or Sparrowhawk and his rise from novice to archmage. The first two of Le Guin’s books, A Wizard of Earthsea and The Tombs of Atuan, were badly adapted in live-action as the tv mini-series Earthsea (2004), which was handled by directors and writers with no feeling for the material who reduced Le Guin’s beautifully evoked world to routine sword-and-sorcery. Ursula Le Guin was highly dissatisfied with the results and publicly lambasted the director and producers.

Happily, Goro Miyazaki restores that balance with Tales from Earthsea, which is mostly based on The Farthest Shore, of which he conducts a faithful telling, while also adding the relationship between Tenar and her adopted daughter Theru/Tehanu, which forms one of the plots that runs through Tehanu. Even though Goro Miyazaki only adapts the books loosely, he achieves something that is a far more authentic essence of Ursula Le Guin’s world than anything in the Earthsea mini-series. There is the full flavour of the culture of the Archipelago and its people, of the way Le Guin’s magic worked, and adherence to the characters of the books. (Probably what casual audiences fail to realise is that the Tenar in the film is the grown-up version of the apprentice handmaiden played by Kristin Kreuk in the Earthsea mini-series. Indeed, the single line that Tenar has here referring to her past and Ged – “He led me out of the darkness” – is a far more accurate retelling of the essence of The Tombs of Atuan than anything in the whole of the Earthsea mini-series).

Whether or not there was rivalry and anger over his taking up the director’s chair, Goro Miyazaki is a more than worthy inheritor of his father’s mantle. Perhaps one of the best compliments that you could pay Goro is that if you imagine seeing Tales from Earthsea without knowing anything about it, you could easily see it as being another Hayao Miyazaki film circa the era of Nausicaa in the Valley of the Wind (1984) and Laputa: Castle in the Sky (1986).

Goro taps perfectly the sense of genteel pastoral respect for nature that runs through all of Hayao Miyazaki’s films – Tales from Earthsea is greatly concerned with the restoration of the Balance and Equilibrium of nature, while the theme about the obsession with youth and immortality being a denial of the natural process of life could easily be one of the philosophical issues that haunts Hayao Miyazaki’s works. There are the serenely contemplative landscapes that appear throughout Hayao Miyazaki’s films – the beautifully detailed painted backgrounds of Gont Town are an artistic marvel and Goro throws in images of Sparrowhawk sailing into inlets in his single-person sailboat or tending the sheep on Tenar’s farm that have a wonderfully peaceful beauty and simplicity.

What maybe Goro Miyazaki lacks is the ability to create the hauntingly transcendental climactic catharses that many of his father’s works like Nausicaa in the Valley of the Wind, My Neighbor Totoro and Princess Mononoke hold. In its place, he does create a film that flies with fully realised fantasy. The climactic battle atop the crumbling tower, the tragedy of seeing Arren corrupted and Sparrowhawk captured have a strength and beauty. Ged/Sparrowhawk has stature as the archmage, yet this is also contrasted with a character of spartan means who likes to keep his hands toiling close to the Earth. The only character who feels underdeveloped is that of Theru/Tehanu – we never see anything of her background and her surprise revelation of identity at the end comes a little unfounded as we know nothing about why this is. Nor for that matter are we granted any insight into the reasons for Arren’s murder of his father.

Tales from Earthsea is a film that works with a magic, simplicity and potency of story. Indeed, it works so well that you wish that Ursula Le Guin would grant Goro Miyazaki the chance to go back and visit her earlier works A Wizard of Earthsea and The Tombs of Atuan and make up for the bad memory of the Earthsea mini-series. One would certainly love to see how Goro Miyazaki would handle the evolution of Ged/Sparrowhawk from youthful apprentice to the archmage that we see here.

As a trivia note, one has good fortune to see Tales from Earthsea in international release whereas due to the copyright held by the producers of the mini-series, American audiences were unable to see the film until 2009.

Goro Miyazaki subsequently went onto direct a further anime film with the non-fantastical From Up on Poppy Hill (2011), the tv series Ronja the Robber’s Daughter (2014) and the film Earwig and the Witch (2020).

(Nominee for Best Musical Score at this site’s Best of 2006 Awards).