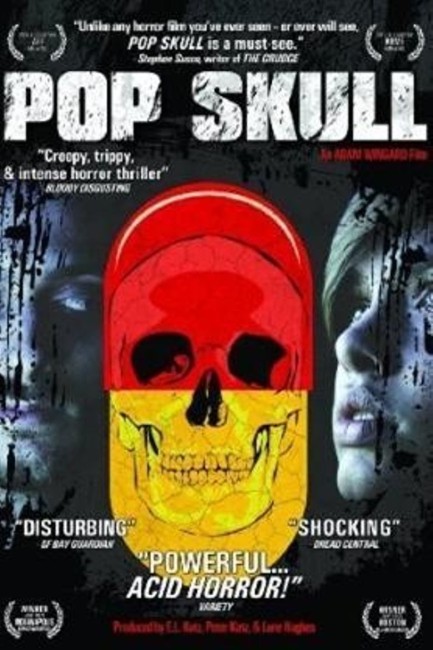 Daniel is deeply depressed after breaking up with his girlfriend Natalie. He is plagued by hallucinations and starts to see ghosts. His best friend Jeff tries to get him out of it but Daniel’s depression and the hallucinations only get worse.

Pop Skull is a micro-budgeted ($3000) film from Alabama-based newcomer filmmaker Adam Wingard who had previously made the slasher comedy Home Sick (2007). Pop Skull attained some rave notices at various festivals around the world and had Adam Wingard’s name touted in the same sentence as David Lynch in terms of comparison.

Without trying to create promotional hyperbole, Pop Skull is best appreciated not so much as a film but as a state of mind. The entire film feels like immersing oneself in a long drawn-out bad acid trip. Indeed, Adam Wingate states that his lead actors were drinking large quantities of cough syrup when they started shooting. To place himself in the right state of mind to complete the film, he too started hitting the cough syrup bottle.

There is no real plot to the film – quite literally, as most of the film was improvised from only a short outline. Much of the footage was deliberately shot with askew lens filters. The screen frequently breaks into migraine-inducing high-speed strobings and colour flickers or rapid juxtaposition of imagery. (On the credits and before the screening, festival management warn that the film may trigger epilepsy). Through it all, there is a good deal in the way of horror effect – shadowy figures creeping around the edge of the frame, appearances from the ghosts of two teenage murderers.

Frequent comparison was made between Adam Wingard and David Lynch when Pop Skull came out. Unless you want to count the recent Lynch of Inland Empire (2006), this is a comparison that seems inapt. Lynch prefers deadpan happenings that mount to or abruptly erupt into the completely bizarre, whereas Adam Wingard’s surreal disjunctions seem more informed by horror film convention. David Lynch’s films are usually tightly controlled in terms of performance, visuals, setting and music. You could maybe posit Adam Wingard as being some sort of mumblecore David Lynch but his style of filmmaking seems at opposite remove from Lynch – all inspirational and off the cuff and seemingly made without any plan or aforethought.

The tone throughout Pop Skull is not so much one of surrealistic deadpan as it is of tripped-out hallucination. If you were to reach for a comparison for Pop Skull, you could maybe call it a head-on collision between Repulsion (1965) and a 1960s LSD trip film like The Trip (1967). Although where David Lynch and Adam Wingard do coincide is in terms of their soundscapes, with Wingard having created a broodingly oppressively, all-surrounding sound scheme that constantly hovers with subliminal thrumming, which reminds a good deal of Lynch’s Eraserhead (1977).

One reaches the end of Pop Skull unsure whether to celebrate it or regard it as amateurish. It does feel at times that the constant immersion into strobing effect stands in lieu of much else happening (and which Adam Wingard freely admits was often there to disguise budgetary shortcomings). Take the stylistic effect away and all that would be left is a not terribly interesting short film about a bugged-out, terminally depressed slacker moping about his ex-girlfriend. There does not feel anything in the treatment of these scenes that rises out of the unremarkable or even the rather dull.

On the other hand, where Pop Skull works is not unakin to say looking at one of Mark Rothko’s multiform paintings. Rothko’s paintings were never about anything but consisted of geometric shapes of different colour – there is the feeling viewing them that you move past the concept of literal depiction and appreciate something on a level of primitive experience and nakedly communicated emotion. In the same sense, Pop Skull exists as a film not so much about anything but a hazy tranced-out state of mind that immerses you in something raw and incommunicable on any literalistic level.