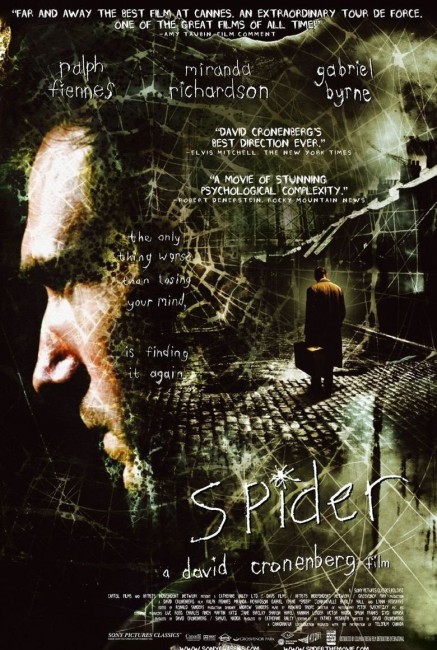 Dennis Clegg moves into a psychiatric halfway house near his old home in England. He has severely retreated from the world, mumbles, writes copiously in a notebook in his own language and wears several shirts. He remembers back to his childhood and how he saw his father consorting with Yvonne, a whore who resembled his mother, and how his father then killed his mother and allowed Yvonne to take her place.

David Cronenberg is one of the most consistently fascinating directors in the world and would have to be a genre favourite for this author for his willingness to explore genuinely perverse ideas and shock imagery. This is something that has made Cronenberg into a cult director. In the 1970s, Cronenberg emerged as a director of what at first seemed merely perversely original B horror movies with the likes of Shivers/The Parasite Murders/They Came from Within (1975), Rabid (1977) and The Brood (1979). Cronenberg gradually moved towards mainstream acclaim with the likes of Scanners (1981), The Dead Zone (1983) and the remake of The Fly (1986).

It was then with films of wild outré originality such as Videodrome (1983) and Dead Ringers (1988), works that came almost overburdened with ideas, that David Cronenberg began to chart his own unique territory. Into the 1990s and 00s, David Cronenberg has begun to leave behind anything resembling easy genre pigeonholing and has taken up the challenge of adapting books that would otherwise be considered unfilmable by directors of less bracing calibre, with the likes of Naked Lunch (1991), Crash (1996), this adaptation of Patrick McGrath’s novel Spider (1990) and the subsequent Cosmopolis (2012).

One eagerly anticipated Spider simply because it was a David Cronenberg film. One especially hoped for a return to form for Cronenberg following the disappointment of his previous effort eXistenZ (1999). With Spider, Cronenberg seems to be channelling Roman Polanski’s Repulsion (1965) with its subjective view looking out from inside the mind of a mad person – perhaps a Repulsion by way of the identity blurring games of Robert Altman’s Images (1972).

The film has a fascinating middle section during the flashbacks to Spider’s childhood where it gradually becomes apparent that what we are seeing is not necessarily literally depictive. There appear to be several versions of Miranda Richardson throughout – one as Spider’s mother, as well as the whore at the pub who flashed Spider her breast who suddenly turns into a blonde version of Miranda Richardson as well. Spider’s father (Gabriel Byrne) kills the mother with a spade to the head after she finds him and the whore having sex in the garden shed, whereupon the whore takes the mother’s place seemingly without notice by anybody else. However, as a later conversation with Gabriel Byrne would seem to disconcertingly indicate, the duplicate blonde Miranda Richardson would appear to only exist inside Spider’s head. The effect is a disturbing jolt.

As Polanski did in Repulsion, David Cronenberg gives us no easy handholds and makes us work for our interpretations. The nearest we can piece together is that Spider seems to be undergoing some weird Freudian primal trauma – of having seen the whore’s breast and linking it to seeing his father and mother fooling around in the garden and metamorphosing it into some twisted version of the two. (Later Lynn Redgrave’s mildly authoritarian halfway house matron also morphs into yet another version of Miranda Richardson).

For all that, Spider is a disappointment and is arguably David Cronenberg’s dullest film to date. Watching Ralph Fiennes act weird and mentally ill – wearing four shirts, keeping his valuables in a sock in his underwear, writing notes in an incomprehensible language in his diary and delivering his performance through barely coherent English – is fascinating for a time, but eventually such a closed-off performance becomes tedious. Cronenberg and Patrick McGrath want to give us some glimpses into the character’s headspace but despite all the flashbacks, there is no explanation of why we go from the average kid played by Bradley Hall in the flashbacks into the withdrawn and dysfunctional individual played by Ralph Fiennes through the bulk of the film. More to the point, Spider is dull. There is little drama to it – the climax of the film, for instance, banally involves a battle of wills over a set of stolen keys. Nothing is ever dramatically resolved.

Perhaps what is missing from Spider is that the work he is adapting allows David Cronenberg few opportunities to indulge the particular fascination with the dissociative split between body and mind, with alien forms of sexual fetishism and mad scientist technology that fire his earlier films up. Spider is one of the few occasions where Cronenberg has not written the screenplay for one of his films himself and he is perhaps restricted by working from another author’s work. Whatever the case, Spider feels one of the least Cronenbergian of David Cronenberg’s films. It was also the point where Cronenberg began to depart from genre material and his subsequent films, A History of Violence (2005), Eastern Promises (2007), A Dangerous Method (2011) and Cosmopolis (2012), abandon fantastic material for psychological explorations of character.

It is also the first time that David Cronenberg has filmed outside of his native Canada, going on location in England for the bulk of the film. Patrick McGrath’s book is very much rooted in its location – the industrial backwaters of rural London, the pubs and canals, the ever-present looming gasworks – and Cronenberg is fairly much tied into this vision. (It would have certainly been a difficult story to translate to his home turf of Toronto where he usually shoots, for instance). In that this location requires Cronenberg to invest the film with much more in the way of regional colour and accent, he only seems to do so perfunctorily and colourlessly, as though this were of little interest to him.

British-born Patrick McGrath’s novels all have an interest in mental illness – his father was superintendent at Broadmoor Hospital for the criminally insane. Other of Patrick McGrath’s works to be adapted to screen are the Gothic horror The Grotesque (1995) and Asylum (2005) about the illicit affair between a psychiatrist’s wife and a mental patient.

David Cronenberg’s other films are:– Stereo (1969), a little-seen film about psychic powers experiments; Crimes of the Future (1970) set a future where people have become sterile and developed strange mutations; Shivers/They Came from Within/The Parasite Murders (1975); Rabid (1977) about a vampiric skin graft; The Brood (1979) about experimental psycho-therapies; Fast Company (1979), a non-genre film about car racing; Scanners (1981), a film about psychic powers; Videodrome (1983) about reality-manipulating tv; The Dead Zone (1983), his adaptation of the Stephen King novel about precognition; The Fly (1986), his remake of the 1950s film; Dead Ringers (1988), his greatest film, about two disturbed twin gynaecologists; Naked Lunch (1991), his surreal adaptation of William S. Burroughs’ drug-hazed counter-culture novel; M. Butterfly (1993), a non-genre film about a Chinese spy who posed as a woman to seduce a British diplomat; Crash (1996), Cronenberg’s adaptation of J.G. Ballard’s novel about the eroticism of car crashes; eXistenZ (1999), a disappointing film about Virtual Reality; the thriller A History of Violence (2005) about a hitman who has taken up a new identity; Eastern Promises (2007) about the Russian Mafia; A Dangerous Method (2011) about the early years of psychotherapy; Cosmopolis (2012), a surreal vision of near-future economic collapse; the dark Hollywood film Maps to the Stars (2014); and Crimes of the Future (2022) set in a future world of surgical performance art. Cronenberg has also made acting appearances in other people films including as a serial killer psychologist in Clive Barker’s Nightbreed (1990); a Mafia hitman in To Die For (1995); a Mafia head in Blood & Donuts (1995); a member of a hospital board of governors in the medical thriller Extreme Measures (1996); as a gas company exec in Don McKellar’s excellent end of the world drama Last Night (1998); as a priest in the serial killer thriller Resurrection (1999); and a victim in the Friday the 13th film Jason X (2001).