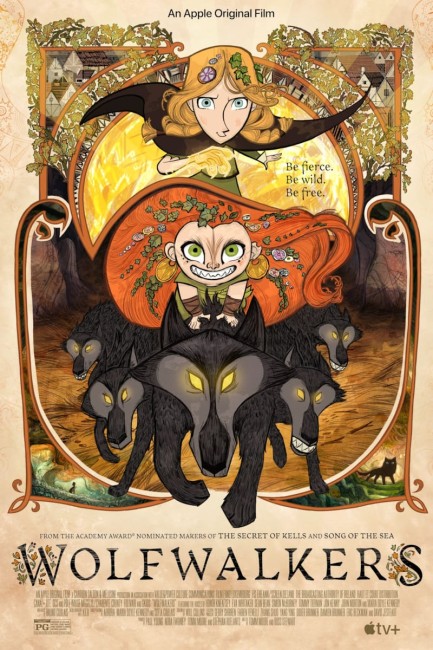 Kilkenny, Ireland, the year 1650. The residents of the town live under the Lord Protector but fear the wolves that inhabit the woods beyond the city gates. British expatriate Bill Goodfellow has been tasked with hunting the wolves. His daughter Robyn dreams of being able to join the hunt with her crossbow but is told to stay home. One day, Robyn sneaks out the gates and follows her father. She comes across wolves attacking a sheepherder but in her desire to shoot the wolf accidentally kills her pet falcon Merlin. She is ordered put to work in the scullery by the Lord Protector but sneaks off back into the woods where she finds Merlin alive. She encounters a wolf that then transforms into a girl Mebh Og MacTire. Robyn realises that Mebh is a wolfwalker and has healing powers. Back in the town, Robyn finds that because Mebh healed her of a wound, she has become a wolfwalker too. As she sleeps, her body manifests as a wolf only for it to be hunted through the town. Robyn then discovers that the Lord Protector keeps Mebh’s mother Meg a prisoner in wolf form unable to return to her body. Setting out to free Meg, Robyn stirs up the Lord Protector who determines to kill the wolves and burn the forest to the ground.

WolfWalkers was the third feature film from Irish animator Tomm Moore. Moore made his debut with The Secret of Kells (2009), a work of Celtic history and myth drawn in the style of illuminated manuscripts. The Secret of Kells was nominated for that year’s Best Animated Film at the Oscars, which served to propel it to high-profile attention. Moore followed this up with Song of the Sea (2014) based on the legend of the selkies, which likewise ended up being nominated for a Best Animated Film Oscar (although neither film won), as well as the On Love episode of Kahlil Gibran’s The Prophet (2014)

WolfWalkers is the peculiarity of an animated Werewolf Film. There have been werewolf films in anime before with the likes of Jin-Roh: The Wolf Brigade (1998) and in particular Wolf Children (2012). Released only a couple of months before WolfWalkers, there was the Australian-made animated film 100% Wolf (2020). We have also had the children’s werewolf film before with the delightful Dutch Alfie the Little Werewolf (2011), as well as the oddity of Wallace & Gromit in The Curse of the Were-Rabbit (2005).

WolfWalkers has been greeted with a host of awards and nominations come end of 2020 award season. Sitting down to watch it, it proves a beautifully made film that is every bit the worth of the accolades being poured onto it. The story’s epic canvas in the conflicts between village and the wolves in the wild and the heroine’s sympathy with the other side and befriending a feral child reminds a good deal of Hayao Miyazaki’s epic anime Princess Mononoke (1997). (Tomm Moore has cited Miyazaki as a strong influence).

What strikes most of all in watching the film is how much Tomm Moore opts for a simplified two-dimensional look, which is very similar to the one he did in The Secret of Kells. The nearest comparison one can make is to the simple 2D animations of the early work of French animator Michel Ocelot – see Kirikou and the Sorceress (1998) – even if the two animators are very different in their styles.

Moore has modelled the look of the film after the tapestries and paintings of the Middle Ages period where artwork was rendered flat and perspective had not been discovered (although it had come into art by the time of the film’s setting of 1650). We get depictions of the village streets where the buildings seem stacked on top of each other or where the town is seen as a flat map that stands vertically like a wall behind the action outside the gates. Characters, wolves, sheep and the like are rendered in simple broad shapes. This also allows Moore to come up with some interestingly patterned backgrounds – fields are like quilted squares. Your initial impression is that it is hard for a film to make such an approach work but you are surprised at the degree of emotion and feeling that Moore and Ross Stewart are able to create out of such simple shapes.

Tomm Moore’s films, unlike almost all mainstream US animation, have found the art of creating simple character strengths and emotional arcs that one cares about. It is hard not to be affected by the efforts to rescue Mebh’s mother and stop her execution. And the scene where she is hit by the arrow becomes a real Bambi (1942)’s mother moment. The scenes escaping from captivity and especially the climactic scenes with the soldiers burning the forest and the fight with the Lord Protector turns into something dramatically exciting.

The script does have an underlying anti-imperialist theme where the villain of the show is revealed to be the Lord Protector. Although it should be noted that this is not an anti-British film as such, given that the central roles of the heroine and her father are British. The film’s end sees Robyn and father relinquishing their city ways and settling into pastoral tranquillity at one with the wolfwalkers.

I do have some minor historical quibbles – the Lord Protector is a role that was assigned to a member of the royal family who stood in for a monarch who was still a minor. It was also a title given to Oliver Cromwell in 1653, who did not come to power until three years after the film’s timeframe. Even then, the role was one assigned to the head of state – ie. protector of the British crown – so you end up questioning why the Lord Protector is situated in Kilkenny, Ireland instead of London, the British seat of government.