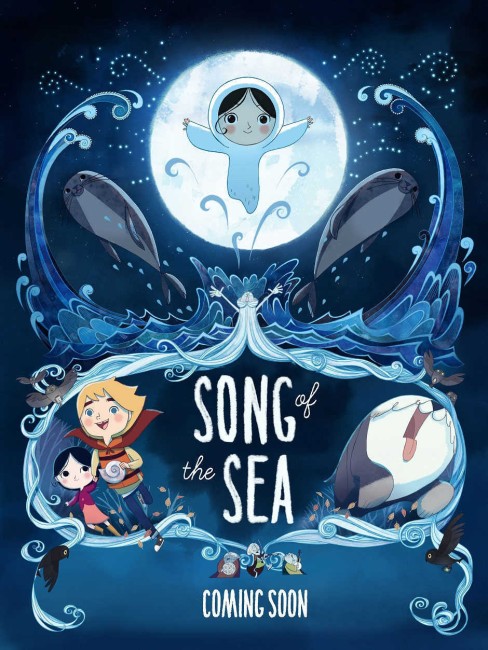 Young Ben’s mother Bronagh disappears at the same time as she gives birth to his young sister Saoirse. Ben grows up living in the lighthouse that his father Conor tends. Saoirse is regarded as strange because she has reached the age of six but has never spoken. One evening, the fairy lights from the sea draw Saoirse to unlock the trunk left by her mother, to don the coat inside. This allows her to become a selkie and swim in the sea amongst the seals. When their grandmother finds Saoirse lying on the beach in the morning, she insists that it is unsafe living there and that Ben and Saoirse come and stay with her in Dublin. There the fairy lights draw Saoirse away. Ben follows as Saoirse encounters three faerie men who want her to don her coat and sing the song that will allow all of them to go home. Ben and Saoirse set out on a quest across the country to return home – only to be beset by the witch Macha and her owls who want to stop them completing the journey.

Irish director Tomm Moore made a striking debut with The Secret of Kells (2009), a work taken from Celtic history and myth and drawn in amazing ways that were designed to represent an historic illuminated manuscript. The Secret of Kells would probably not have gained much attention outside of festivals were it not for its being nominated for that year’s Best Animated Film at the Oscars, something that suddenly served to propel it to high-profile attention.

The same has happened with Moore’s follow-up with Song of the Sea, which likewise ended up being nominated for a Best Animated Film Oscar but lost out to the far less interesting Big Hero 6 (2014). Although certainly Moore’s name was sufficient on the back of The Secret of Kells to give Song of the Sea reasonable attention all on its own. Subsequent to this, Tomm Moore directed the On Love segment of Kahlil Gibran’s The Prophet (2014) and then co-directed the full length WolfWalkers (2020).

As in The Secret of Kells, Tomm Moore draws on Celtic mythology. In interviews, Moore told how, while on holiday on the Irish coast, he was disturbed to see that the local fishermen were slaughtering seals believing them to be depleting the local fish stocks. This lead to his delving into the myths and legends that underlay the seals and to the stories of the selkies. Selkies are creatures from Irish and Scottish folklore that live as seals but shed their skins to become human. We have seen the occasional film dealing with the selkie before – always tied to the legends of Irish fishermen – in John Sayles– The Secret of Roan Inish (1994) and Neil Jordan’s Ondine (2009), even an Australian children’s film Selkie (2000).

Tomm Moore tells a fairly traditional story – the message is the same as the one in The Secret of Roan Inish of how the modern Irish have lost touch with their roots and legends and need to find a way back to a harmony with nature. The story is a familiar one of the two children on a mythic journey across country – one that incidentally resembles another fine work about Irish legend and modern culture Into the West (1993). Tomm Moore gives it all the right degree of warmth, quirky offbeat touches and emotional upsurges, allowing everything to reach a lovely apotheosis.

What makes Song of the Sea work so beautifully is the artwork. Tomm Moore stated that he was influenced by the works of artists of the Der Blaue Reiter school like Paul Klee and Wassily Kandinsky, as well as traditional Irish landscape painter Paul Henry. The results are similar to the style that Moore adopted on The Secret of Kells and the subsequent WolfWalkers where everything had a two-dimensionality – this is a film where fairly much anything that denotes perspective has been flattened out and the characters are all stylised blocks and elongated curves or rounded moon faces with eyes. The backgrounds have a richness – Moore doesn’t just offer an idealised version of Irish pastoral art but breaks it up with modern touches like power pylons across the fields, bus rides, the venture into a seemingly anarchic Dublin with people partying on the streets.

In some of the more fantastical scenes, you are reminded very much of Hayao Miyazaki – Moore has stated that My Neighbor Totoro (1988) is his favourite film – and especially the worlds of eccentric characters that we have in Spirited Away (2001) – Macha could easily be a sister to Yubaba from that film. The climactic scenes with the freeing of the faerie folk, the awakening of the giant and the return of the children’s mother often feels like Moore is channelling many parts of Princess Mononoke (1997) and are the most beautiful and touching in the film.