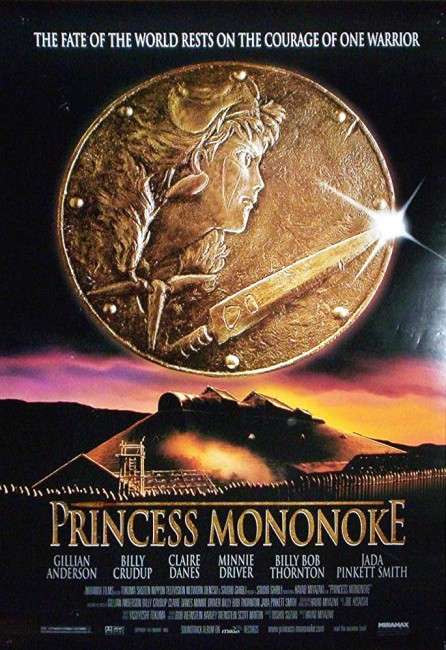 The young warrior prince Ashitaka shoots down a crazed boar that attacks his village. An examination determines that the boar’s madness was caused by an iron bullet embedded in its flesh. Ashitaka is now becoming infected by the same poison and his only choice is to find the source of the bullet. He sets forth and eventually comes to Iron Town, a city of ironmongers ruled by Lady Eboshi. Lady Eboshi is determined to raze the nearby forest so that she can mine the mountain underneath but the intelligent wolves that live in the forest attack Iron Town in protest. Ashitaka falls in love with San, a wild girl who lives in the forest with the wolves and periodically leads them to try to stop Lady Eboshi. San saves Ashitaka’s life but back in Iron Town, Lady Eboshi and the Emperor’s troops leads a massed attack to kill and capture the severed head of the Great Spirit of the Forest.

Princess Mononoke was one of the most successful films ever released in Japan. It was a massive hit, outgrossing even Titanic (1997). Even the title song was a hit single. The English-language release took some time in coming, being continually pushed back for several months by its American distributor Miramax. Part of that was the indecision about whether to cut the film or allow it to be released with a restricted censorship rating. Nevertheless, these delays were enough time for its reputation to steadily grow in anime circles. AnimeFantastique magazine even released a cover that proclaimed Princess Mononoke “the greatest anime EVER,” which seemed like hyperbole that was setting the film up for deflation.

However, when seen on the widescreen, the results are utterly dazzling, fully deservous of such praise. Anime constantly surprises and leaves for dead anything ever produced by Disney and the Western animation studios. For example, Princess Mononoke has talking animals but these are a far stretch from the cute, slapstick sidekicks that inhabit Disney animation – these are alternately sagacious and ferocious talking boars and wolves presented without a hint of cuteness. What also strikes about Princess Mononoke is the epic quality of its story. Filmed fantasy has always had a difficulty in capturing the sweep of Epic Fantasy a la J.R.R. Tolkien, David Eddings, Stephen Donaldson et al – part of this is that the length of a film does not allow it to present the cultural and geographic immersion in another world that a 700-page volume does. Plus most Epic Fantasy books come as trilogies and multi-volume stories and launching such is a huge gamble for any production company. Epic Fantasy is surely best suited for tv – but so far tv’s ventures into High Fantasy have never taken up the venture of going more beyond the contemporary in-joking cuteness of Hercules: The Legendary Journeys (1994-9) and Xena: Warrior Princess (1995-2001). Up until the massive success of the Lord of the Rings trilogy a few years later, the Star Wars saga was perhaps the most successful attempt to create Epic Fantasy on screen.

Princess Mononoke may be the most successful attempt to capture the sweep of Epic Fantasy within the space of a single, non-continuing series film. The plot almost ends up with far too many factions all pursuing different agendas at once – Lady Eboshi and her iron-working ex-whores, the Emperor’s army, the Emperor’s assassins, the wolves, the boars and the apes – that it becomes difficult at times trying to work out who is on whose side and who is meant to be fighting whom. The story is presented with considerable complexity – as was one of the worries prior to release, the difficulty in marketing the film was that there were no easy black-and-white moral messages a la Disney. Lady Eboshi is portrayed as the villainness of the piece, yet we also see sympathy for her side too in the scenes where her women try to kill San in revenge for her murder of their husbands.

The quality of the animation is utterly stunning. Widescreen multiplane visuals are employed with casual brilliance. The action scenes are intensive and enthralling – the climactic battle scenes with the defending human army detonating attacking boars with grenades as they scale a hillside is incredible. The most beautiful moments in the film are those with the emergence of the Great Spirit of the Forest, a creature that moves between a being of stars and a giant skeletal elk. The scenes with its first appearance at the coming of morning, its giant shape silently moving across the forest and becoming a human-headed elk that walks on water to revive Ashitaka is a sequence that has a breathtakingly transcendent beauty, the likes of which makes fantastic cinema so rewarding. The climax of the film with the Great Spirit rampaging through the forest in search of its severed head and the race of the various peoples to escape the tide of poison is an enthralling and unique variant on the requisite anime mass destruction climax.

Princess Mononoke is a dazzling film but met with only mixed success in the West, both with its constantly postponed release and limited distribution. Why the lack of promotion is a mystery. Maybe it is simply the inability to know how to market such a complex and adult animated film to audiences that cannot conceive of animation as being more than cute animals. Certainly, Miramax has presented the translated print with the utmost respect. The beautifully epic and lyrical score from the original has also been retained. An A-list cast has been hired to voice the characters. Furthermore, the studio went with preserving the original and has not edited out the casual violence in an attempt to sell the film down to younger audiences.

Miramax even went to the lengths of hiring writer Neil Gaiman – the multi-disciplined writer of graphic novels such as Sandman and Books of Magic; the fine and unusual fantasy tv series Neverwhere (1996); and novels like Good Omens (1990), American Gods (2000), Anansi Boys (2005), The Graveyard Book and The Ocean at the End of the Lane (2013); as well as later filmmaker with works like MirrorMask (2005), Beowulf (2007), Stardust (2007), Coraline (2009), How to Talk to Girls at Parties (2017), the tv series American Gods (2017– ) and the tv mini-series Good Omens (2019) – to craft an English-language script that comes as close to the original as possible while adding its own lyrical poetry.

Princess Mononoke brought to attention the work of the master Japanese animator Hayao Miyazaki. Hayao Miyazaki has previously developed a growing cult with the animated likes of the slapstick caper film The Castle of Cagliostro (1980), the environmentalist post-holocaust film Nausicaa in the Valley of the Wind/Warriors of the Wind (1984), the air adventure film Laputa: Castle in the Sky (1986), the delightful children’s film My Neighbor Totoro (1988), Kiki’s Delivery Service (1989) about a young witch, and Porco Rosso (1992) about a talking pig aviator. Miyazaki subsequently went onto win an Academy Award with the equally amazing Spirited Away (2001) and then made Howl’s Moving Castle (2004), Ponyo on a Cliff By the Sea (2008) and The Wind Rises (2013), while he has also written and planned Arrietty/The Secret World of Arrietty (2010) and From Up on Poppy Hill (2011). The Kingdom of Dreams and Madness (2013) is also a documentary about Miyazaki and Studio Ghibli.