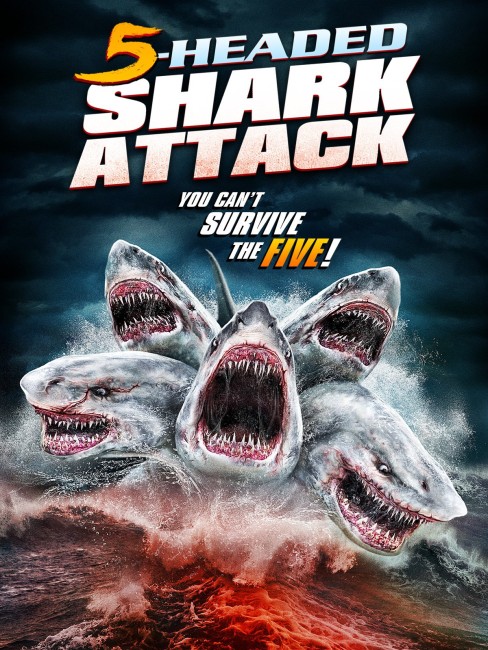 People are being attacked by a shark with five heads in the waters around Puerto Rico’s Palomino Island. Police captain Sterling goes to marine biologist Angie Yost with a photo found on one victim’s camera to ask what it is but she does not know. Thaddeus Marshall, the head of the oceanarium where Angie works, decides they could save their flagging finances by capturing the five-headed shark. He twists Angie’s arm into going out on the water after it along with a bunch of her students. Angie obtains the help of her ex, the shark hunter Red, and they set out in his boat. However, the five-headed shark quickly begins eliminating their numbers.

The very title 5 Headed Shark Attack seems almost to be offered up The Asylum as a challenge to see in how much of a sense of humour audience are willing to keep buying their offerings before this topples over into the merely silly (as the last two Sharknado sequels have done). There is a point here where the meta-referentiality starts to just get a little too precious – a scene early on where Nikki Howard is pooh-poohing the idea of a five-headed shark and retorts “What’s next? Sharks flying around in a tornado.”

There is a highly entertaining money shot where the shark succeeds in bringing down a helicopter – a scene copied from Jaws 2 (1978). Aside from that though, there is not much of the tongue-in-cheek spirit of the Sharknado films or 3 Headed Shark Attack and everything is played straight dramatically. In essence, all that The Asylum have done is rehashed the basics of Jaws (1975) – or perhaps even more so the Jaws copy Orca (1977) with its plot of attempting to capture the watery menace for the first time – and kept the cast at sea on a variety of boats for the bulk of the running time. In lacking the ability to create the suspense that Steven Spielberg did, this does require a large number of victims to fall into the water and be chomped or boats to end up failing/sinking within the film’s running time. Aside from the absurd novelty of the title creature, there is nothing to 5 Headed Shark Attack beyond a regular B-budget shark attack film though.

The film was shot in Puerto Rico where you cannot deny the locations are shot with an impressive eye. The effects are generally good, as they are increasingly getting to be with each new film from The Asylum. On the other hand, the quite good shark attack scenes are let down by the odd corner-cut scene – in particular, one where an obviously poorly computer-generated fishing boat is sunk.