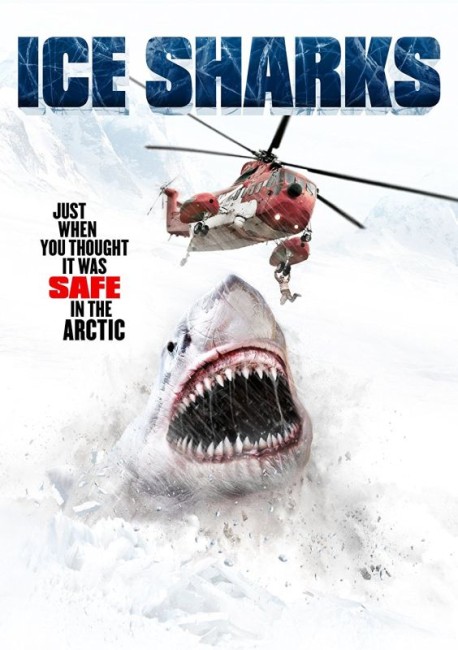 A crewmember at the Oasis polar base goes out to check on a faulty sensor and is attacked by a shark that bursts up through the icepack. The others realise that they are dealing with prehistoric sharks that have been revived by warm air currents under the ice shelf. The sharks now circle and attack the base. They succeed in separating the station from the landmass, leaving it floating on a sheet of ice, and then cause it to topple into the water. Sinking, trapped inside the base, the crew desperately try to find a means of being rescued before the one day’s worth of air they have left runs out and the sharks break in.

The surprise about Ice Sharks, which on the face of it is sold like just another gonzo killer shark film, is that it actually plays itself seriously, something that must have taken considerable restraint in the post-Sharknado era. The usual cheap effects of The Asylum’s films are not too bad – there are one or two slightly dodgy ones but these are kept brief, while most of the others look perfectly reasonable. The film even manages to shoot some underwater sequences during the efforts of the divers to repair the habitat as sharks circle behind them, which look reasonably convincing. Emile Edwin Smith creates moderate tension during the scenes where the sharks separate the base and cause it to sink to the ocean floor and then the various dramas as the survivors attempt to alert the rescue ship. It is a low-budget film but the drama is solid and tense. With a better budget, these are scenes that could have approached something of the underwater scenes in The Abyss (1989).

There are one or two absurdities – one of these is the lack of geographical knowledge that frequently turns up in Emile Edwin Smith’s films. One of the maps of where the base is supposedly located shows Ross Island, which is part of the Antarctic continental mass, while the other shows the Northwestern Territories and Nunavut, which are located in the Canadian north – in other words, near The Arctic and at entirely the opposite end of the Earth than the Antarctic.