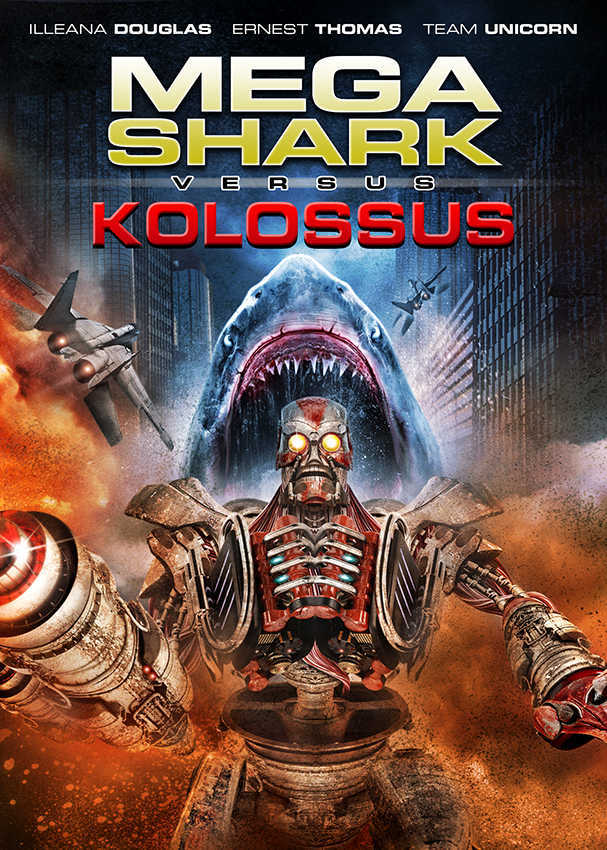 The world is under threat by more megalodons. After a disastrous attempt to stop a megalodon near Rio de Janeiro, US Navy Admiral Titus Perry brings in shark expert Allison Grey. She has a plan to lure the shark with EM fields and then contain it. However, self-important rival John Bullock hijacks the talks and backs the admiral’s idea of firing on the megalodon with radioactive isotope missiles, overriding Allison’s protests that this will endanger all life in the vicinity. Allison is then contacted by tech billionaire Joshua Dane who has eavesdropped on the conference. He has hacked Allison’s email to obtain her plans and built a submarine equipped with the EM fields. They follow as the Navy sets sail to destroy the shark. Meanwhile, CIA agent Moira King was part of an undercover operation to obtain the rare but powerful substance Red Mercury housed in the Chernobyl Exclusion Zone in Ukraine but their doing so unwittingly reactivated Kolossus, a giant robot from the Soviet era. With the Kolossus set loose, she is suspended. She decides to goes AWOL with colleague Spencer to find a way to stop the Kolossus. The two giant monsters will meet up in the Black Sea.

The effects are fairly good considering The Asylum’s penchant for corner-cut effects budgets. There are some highly entertaining shots of the mega shark knocking battleships out of the water and up onto the beach and one sensational shot where the shark leaps right out of the water to devour Illeana Douglas’s speedboat. Things get particularly entertaining by the time of the climactic showdown with Kolossus grabbing fighter planes and crushing them together in its hands and then tossing the mega shark up into orbit so that it can bring down a laser-armed satellite, only for the satellite to be knocked off course and end up scouring The Moon.

The Asylum’s films enter into some rather dubious politics at times. Granted you are not meant to be taking them seriously. Megalodon (2018), for instance, came out saluting the flag and seemed to yearn for the good old days of the Cold War with America against the evil Russians. Similarly here, you are not sure what to make of the scenes where the mega shark gets wound up in an American flag as it goes into battle with the Soviet-made Kolossus robot. In some ways, you can’t help but read Mega Shark vs Kolossus as being the killer shark genre’s version of the battle between Sylvester Stallone and Dolph Lundgren in Rocky IV (1985) where the fight between the two titans became representative of a political showdown between East and West.

The surprise piece of casting in the film is Illeana Douglas. The early Mega Shark film gained some stunt casting value out of bringing teen pop sensation Debbie Gibson out of mothballs and similar things were done in other films. Illeana has had a career since the 1980s and respectable credits in a number of indie films (plus was a long-time girlfriend of Martin Scorsese). The only question is why hasn’t she done B movies before? She’s great in the part, looks incredibly foxy at the age of fifty and gives the part far more than it deserves.