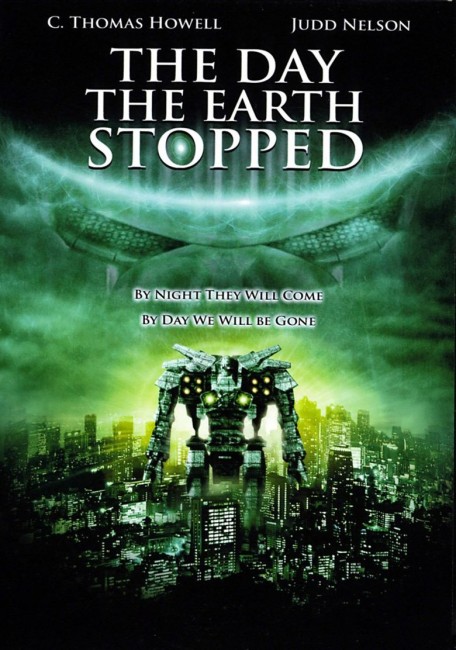 Giant robots appear over all the major Earth cities. These are nicknamed Megaliths. Soldier Josh Myron heads a unit to investigate an object that came down in Los Angeles. From out of the wreck appear a nude man and woman who demonstrate the power to mentally repel attackers. They are taken into military custody, although neither appear to be able to speak. As Josh guards the woman, she suddenly speaks to him, stating that they have come to destroy the Earth because humanity has demonstrated the capacity for threatening other species. She requests that Josh prove that humanity is worth sparing. The robots meanwhile shut down all power worldwide. When Josh’s story is disbelieved, he decides to break the woman from custody and go on a quest to prove that humanity should be saved.

Made on one of The Asylum’s economy budgets, The Day the Earth Stopped is a cheaply impoverished film on all counts. There is little conviction to the effects scenes – even the non-effects scenes look as though they have been cheaply shot. For instance, the aliens are supposed to have caused a worldwide disaster by stopping all power but you would hardly know it from the few scenes we get that amount to no more than a handful of cars stopped on the streets. The action, the stakes of the end of the world are so generically delivered that it is hard to care about what happens.

The Day the Earth Stopped was made by C. Thomas Howell. Howell was a teen actor during the 1980s and then became an Asylum regular, starring in the likes of War of the Worlds (2005) and The Da Vinci Treasure (2006). He branched out as a director for The Asylum with a handful of other films, including War of the Worlds 2: The Next Wave (2008) and The Land That Time Forgot (2009).