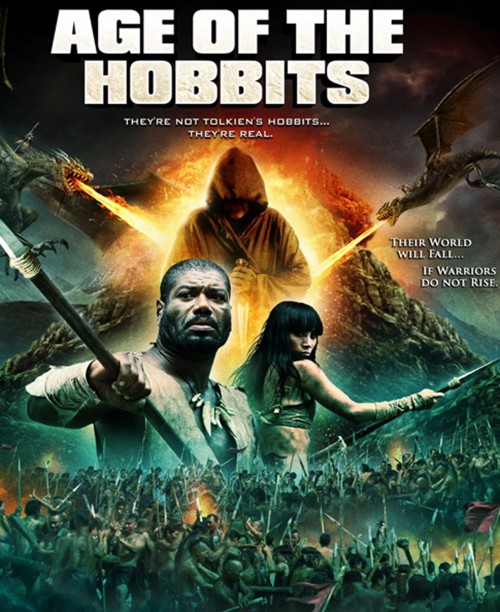 aka Clash of the Empires; Lord of the Elves

Flores Island, Indonesia, 12,000 years ago. The idyll of the peaceful halfling Tree People is suddenly invaded by the brutish Rock People who abduct many of their number aboard their flying dragons and take them to their cave home as sacrifices for the coming full moon. With his wife Suta one of those abducted, her husband Tak Tek and their two children Goben and Omi set out on a perilous journey to rescue her. In the course of their journey, Tak Tek saves the human warrior Amthar from an attack by a wild beast. Feeling indebted, Amthar defies the wishes of his king not to upset the Rock People and joins Tak Tek’s quest, along with several other warriors. Together they must make an assault on the Rock People’s cave stronghold as the sacrifices of the full moon begin.

Age of the Hobbits was made to exploit the release of Peter Jackson’s The Hobbit: An Unexpected Journey (2012), coming out a month before the other film was. This was also one of the rare occasions where the producers of the original model sued The Asylum, insisting on copyright infringement and demanding a name change. Thus Age of the Hobbits was released in the US as the much more anodyne Clash of the Empires – here in Canada and other territories, it goes into release as Age of the Hobbits where clearly Jackson and Warner Brothers decided not to fight a court battle in every territory of release. Other versions of the film go into release under the name Lord of the Elves.

Warner Brothers and co do perhaps have a point. Hobbit was a term that was invented by J.R.R. Tolkien and is not something in public domain. The film here never even features the term hobbit anywhere throughout – although the end credits do refer to the various little people extras as ‘hobbit villagers’. (For that matter, the title Lord of the Elves is also inaccurate as there are no elves in the film either). The Asylum’s justification during the court case is that they were making a film about the prehistoric dwarf people that were found on the island of Flores, Indonesia in 2003, which were propmptly nicknamed hobbits.

That said, the film does seem set up to imitate the basic plot structure of The Lord of the Rings, albeit on a low-budget in which a band of little people set out from their idyllic village into the big, wide world to fight off a race of brutish, fanged creatures intent on evil during which they encounter a group of normal-sized human warriors who join their quest. Joseph J. Lawson even attempts to copy Peter Jackson’s trademark shots of helicopter shots seeping across mountains, although with the lower budget he is operating on, all the film can muster are several repeated shots flying across valley terrain and a waterfall.

On the other hand, as Age of the Hobbits opens, it quickly plunges into WTF territory. Unlike Peter Jackson, The Asylum are operating on a B-budget. Thus they are unable to afford to do what he did and digitally shrink the various hobbit and little people actors and make them appear small in respect to the normal-sized humans. As a result, all of the hobbit roles are played by dwarves. This immediately gives the film a dubiousness that places it into the same arena as a freakshow like The Terror of Tiny Town (1938).

Moreover, the entire film has been shot on location in Indonesia. Clearly, such a country does not afford a wide pool of little people who are also actors and English speaking so most of the roles end up being played by people that are clearly non-professionals and whose voices are dubbed (the exception might be lead hobbit Srogn who at least gives a serviceably sympathetic and undubbed performance).

The only recognisable faces in the cast are the C-list names of Christopher Judge, best known as a regular in Stargate SG-1 (1997-2007), and Chinese actress Bai Ling known for English-language roles such as The Crow (1994), Anna and the King (1999) and Sky Captain and the World of Tomorrow (2004)

The adventure aspect of the film is passable but limited. The plot has an economic minimalism that never allows it much opportunity to open up and provide any epic adventure. At least, Joseph J. Lawson provide some digital creature effects that are better than average for The Asylum – particularly the large-sized spiders and lizards creatures, although the flying lizard-dragons that turn up at the start and end are only so-so.