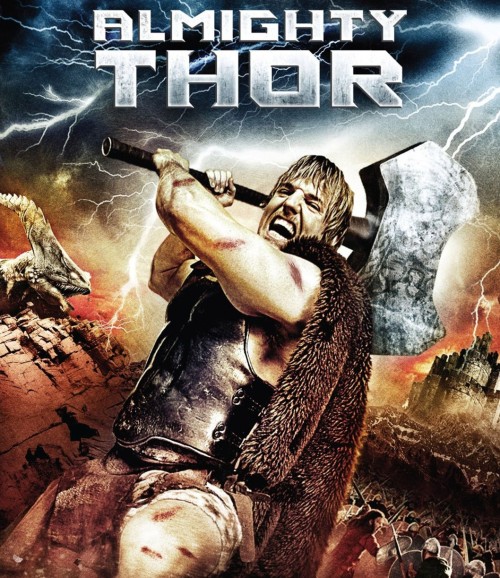 The dark god Loki invades Asgard in search of the Hammer of Invincibility, seeking to use it to bring about Ragnarok, the end of the world. Thor’s father Odin and older brother Baldir are killed during the battle. Thor makes an escape to Earth aided by the warrior woman Jarnsaxa. He seeks the way to the Tree of Life where the Hammer is hidden. Jarnsaxa tries to persuade him to learn how to fight before going back up against Loki. All the while, Loki comes taunting and playing psychological games with Thor, trying to persuade him to surrender the Hammer.

In this case, Almighty Thor was a mockbuster ripoff of the Marvel Comics’ adaptation Thor (2011) – it even aired on the Syfy Channel the same day that Thor premiered in US theatres. Almighty Thor is the only attempt The Asylum have made to copy one of the extremely popular Marvel Comics adaptations of the 00s. The reason for this is that here they are able to draw from the original Norse myths, which are not held in any copyright, as opposed to more plagiaristically attempting to copy direct from one of Marvel’s comic-book creations. Even so, the plot here where a hammer-wielding Thor goes into exile on Earth and begins a war against his evil brother Loki who seeks to destroy Asgard runs so close to Thor that it could be a clone copy in many places. This becomes even more apparent when you contrast the title of this film, Almighty Thor, with the one that the original Marvel comic-book went by for a number of years, The Mighty Thor.

As with all of The Asylum’s films, Almighty Thor is cheaply made. There are all the extremely cut-price digital effects that they regularly churn out. Asgard looks like no more than a standard fantasy kingdom with a digital castle plonked in the midst of an everyday landscape while the gods exchange sword clashes just like a run of the mill low-budget sword-and-sorcery film. Most of the superheroics take place with Richard Grieco’s Loki tramping around regular city streets or are confrontations that take place in railway yards and back alleys – in fact, the film becomes repetitive while we wait for the two characters to finish walking around the downtown and actually get into combat. The Ragnarok that takes place – the end of the world according to Norse mythology – only seems to encompass a few city blocks.

In the person of Cody Deal, Thor is now just a standard callow youth. Deal makes almost diametric contrast to Chris Helmsworth’s pumped-up larger-than-life heroism in Thor. Almighty Thor chooses the potentially more interesting story arc than Thor of having its central character have to grow into and discover his godlike powers. Cody Deal is okay when he gets into the heroic action but when it comes to his acting, he seems far too whiny. The one in the cast appearing to be having fun is former 1980s teenybop star Richard Grieco. Grieco has landed on hard times in recent years and had to resort to taking up roles in some tatty productions. Here at least Grieco has fun chewing the scenery and playing at being bad for all that he can.