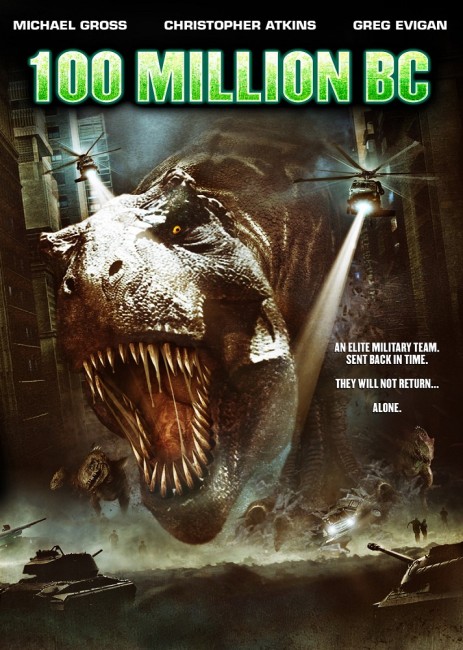 A team of soldiers is assembled by Dr Franklin Reno. Reno explains how he worked on Operation Rainbow, more commonly known as The Philadelphia Experiment. This succeeded in transporting a team through time to 70 million years in the past. The team, which included Reno’s brother Erik, was thought lost until cave paintings were discovered in Argentina indicating that they survived. Reno now leads a squad of soldiers through the portal back into the prehistoric era to rescue Erik and the others. They find them, having been trapped there for seven years, leading a precarious existence fighting off the dinosaurs. However, the return journey ends up transporting a tyrannosaur back through the portal with them and unleashing it in Los Angeles.

100 Million BC was apparently shot under the title Prehistoric. However, with the release of Roland Emmerich’s 10,000 B.C. (2008), the film was quickly retitled to become another Asylum mockbuster. Most of The Asylum’s mockbusters go into release within a day or two, or the week before their big-budget counterpart. In this case, 10,000 B.C. was released in March of 2008 but 100 Million BC did not come out until two months later in May of the same year,

Both films are quite different. 10,000 B.C. is a depiction of the life of the caveman, whereas 100 Million BC is a time travel story about contemporary soldiers travelling into Prehistory on a rescue mission, while the second half becomes about a dinosaur they bring back going amok in the streets of present-day Los Angeles.

100 Million BC conducts its time travel with the handwave explanation of a time portal. It does however do so in some interesting ways. One of these is the claim that the time portal was a derivation from The Philadelphia Experiment – an actual experiment in radar invisibility conducted during World War II that has gone on to enter into fringe science mythology – see the film version The Philadelphia Experiment (1984) for more detail. The script, by regular Asylum producer Paul Bales, justifies all of this with some almost plausible sounding jargon taken from real physics about closed timelike curves and Minkowski Space.

The Dinosaur scenes suffer from the ropey effects common to most of The Asylum’s films. These range between the passable and the shoddy. Notedly, all the dinosaur effects are offered up in quick cuts so that their shortcomings are not too visible. The Asylum conducted a much better version of a dinosaur loose in Los Angeles a few years later with Age of Dinosaurs (2013).

It also feels as though some parts of the screenplay have either been curtailed because of shooting/budget issues. One of the more glaring issues is how it is explained that the portal does not transport people in space but in time – we are then told that the cave paintings were discovered in Argentina and the soldiers go through to visit there but then when they return and the dinosaur gets loose they are in contemporary Los Angeles.

The other problem is exactly what goes on at the end. The lead actor is Michel Gross but he stays behind in the past as everyone else returns to the present. However, right towards the end, a younger version of him turns up with some muddled and not at all clear explanation about him having been returned to an earlier time. You get the impression that this was a quick attempt to patch up the script after Gross had departed the number of days he had been paid for and a different ending was needed.