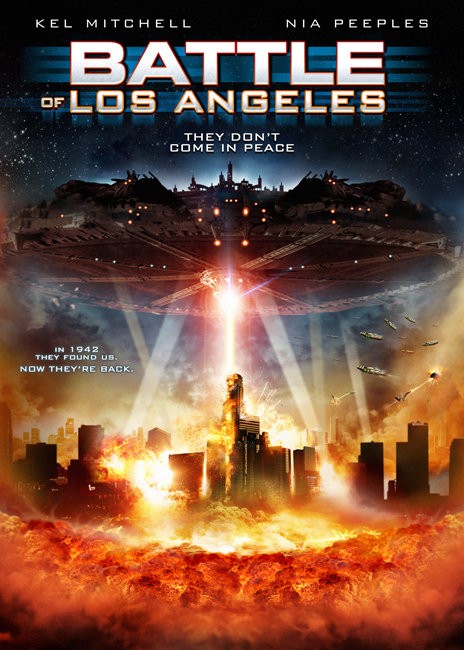 An alien mothership abruptly appears over Los Angeles. Air Force jets are sent up against it but it manages to deflect and redirect their missiles back against them, while sending out hundreds of tiny ships to attack. At an Air Force auxiliary base, the jets are about to be launched against the aliens when the airfield comes under attack. During the midst of the chaos, a WWII era plane lands and proves to contain Captain Pete Rodgers, an Air Force pilot who was snatched by the aliens in 1942. The survivors at the airfield try to get to safety amid attacks by aliens ships, drones and robots. They are guided by Karla Smythe, an operative from Majestic, who takes them to a secret underground base where the US government holds one of the aliens a prisoner. From there the survivors gain an idea of how they might fight back against the aliens.

In the cases of most of The Asylum’s films, they are riffing off works adapted from other sources, sometimes ones in public domain, or remakes and revivals of other works so it is relatively easy to get an idea of where the source work is going. With the case of Battle Los Angeles, the film was an original one and all The Asylum had to go on was no doubt the title concept of soldiers in a firefight with aliens in the midst of an invasion occurring in Los Angeles. The rest of the film has been made up by dipping into the book of cliches from other alien invasion films – the image and design of the mothership hovering in the skyline over the city has been taken from District 9 (2009); the column of blue energy descending down into the city from Skyline (2010); while much of the latter half of the film comes from Independence Day (1996) – the survivors being taken to Area 51 or some equivalent thereof, encountering a captured alien held by the military, and then beginning their fight back against the invasion by learning to pilot an alien craft and flying it back up inside the mothership.

Its’ blatant derivativeness aside, Battle of Los Angeles is one of The Asylum’s better films. The opening scenes with the arrival of the saucer, its assault on the downtown, the Air Force fighters being launched and their missiles being repelled and turned against them, followed by the launch of the tiny saucers from the mothership all have effects of a much higher calibre than usual for The Asylum. Once it gets into the ground-based action, director Mark Atkins does a fair job of approximating the bustle, characterisations and fast military doubletalk of a war film.

One of the best parts of the film are the women. Theresa Jun-Tao gives a tough, hard-talking and kickass performance where she has clearly been cast with one eye towards Michelle Rodriguez. Nia Peeples has a great entrance where she appears atop a building, dives down and attacks a drone, despatching it with a sword. Indeed, Mark Atkins has fun putting the cast into larger-than-life heroic postures – Nia Peeples’ aforementioned entrance; or her going up against drone spheres in a series of sword wielding stances; she emerging from a wound with an eye patch; the hardline old-timer general (Robert Pike Daniel) who stands his ground as a UFO comes crashing down and skidding to a halt a matter of feet in front of him. The captain at Majestic (Tim Abell) tosses off lines like “Hey, has anyone got any Reese’s Pieces? That damn thing loves them.”

The film even develops a decidedly WTF element in one scene where the timeslipped WWII pilot (Dylan Vox) goes to talk to the alien, emits a ear-piercing screech that causes everyone to fall down and the glass to break, jumps over the sill to talk to the alien (which is economically only ever seen as a three-fingered claw poking up behind the window), then leaps back out and despatches the soldiers, before he is beheaded by Nia Peeples and the severed head then splits open to reveal robotic circuitry and a sphere that burrows up through the ceiling. It is certainly one sequence in the film that contains a wild imagination and originality.

There are a few scenes where the film does strike out. One is the silly scene where the military troupe comes up against an alien robot in the street, which looks exactly like a hi-tech dustbin. The scenes piloting the alien saucer and venturing into the mothership at the end are one point where the generally competent effects start to fall down, although they do pick up a couple of moments later during the encounter with a reasonable looking giant monster in the bowels of the mothership. In the end, Battle of Los Angeles is passably serviceable. Certainly, it is neither any better nor any worse than the two big-budget entries that came out around the same time with Skyline and Battle Los Angeles.